When we last checked in with the 155-pound weight class, defections and suspensions skewered the results a bit.

Anthony Pettis wasn't eligible for a lightweight rankings due to the fact he was set to challenge Jose Aldo for the featherweight title. Pat Healy and Nate Diaz were out due to suspension.

This time around, however, not only has order been restored, but there's a new king atop the rankings. As everyone knows by now, Pettis is back at his natural weight class after a bizarre turn of events got him a shot at the UFC lightweight title. And after dismantling and then submitting Benson Henderson to capture the belt at UFC 164, he returns to the rankings as the undisputed No. 1, taking the top spot on all six votes in the new SB Nation lightweight poll.

Pettis' win also had the effect of giving the rest of the top five a shove down a notch. Henderson, who has never been defeated in Zuffa by anyone not named Anthony Pettis, takes second place with 53 points, garnering five of six seconds. Former Strikeforce champ Gilbert Melendez, whom many felt should have gotten the nod against Henderson in April, takes No. 3 with 46; Grant, Pettis' next challenger, is fourth with 43, and Josh Thomson (33) clocks in at No. 5.

There was a bit more upheaval in the bottom half of the poll. Healy and Diaz are back in at the 9 and 10 spots, respectively, after their suspensions ended. Their additions, along with Pettis, meant someone had to go, which means that Khabib Numagodemov, Eddie Alvarez, and Donald Cerrone are all out. In the case of the former, who finished 11th, he'll have plenty of opportunity to crack the top 10 again. Alvarez is a bit of an "out of sight, out of mind" thing, due to his lengthy holdout, but he returns and meets No. 6 Michael Chandler on Nov. 2. In the case of Cerrone, one gets the feeling the veteran warrior has seen his best days in the cage.

(Scoring: Fighters are given 10 points for a first-place vote, nine points for second, etc., down to one point for 10th place. The results are then tallied up and presented here. Official SB Nation rankings policy: Fighters under commission or company suspension are ineligible to be ranked during the duration of their suspension or if they have licensing issues. Presently, this does not affect any fighters at lightweight who are generally considered to be Top-10 caliber). 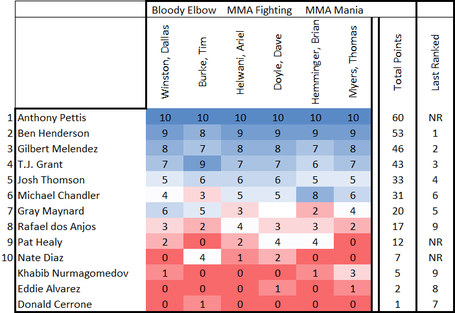 1. Anthony Pettis (17-2, 60 points): Good news for Pettis is that his left knee injury was a sprain, not a tear. But he's still been injured often enough to wonder if injuries will hamper his reign more than anything an opponent could do.

2. Ben Henderson (19-3, 53 points): Dana White made it pretty clear he's not too keen on Pettis-Bendo 3, so the second-best lightweight has his work cut out for him.

3. Gilbert Melendez (21-3, 46 points): A fight against Diego Sanchez in October promises to be exciting. It's also one with far more downside than up for "El Nino."

4, TJ Grant (21-5, 43 points): As tempting as a Pettis-Jose Aldo matchup was, UFC is ultimately doing the right thing in giving Grant the next shot at Pettis' belt.

5, Josh Thomson (20-5, 1 no-contest, 33 points): Thomson has stated he wants a top opponent next. Pettis, Melendez and Grant are spoken for; Chandler fights in Bellator; Maynard is his teammate. Would Thomson be willing to wait on Henderson?

6, Michael Chandler (12-0, 31 points): Bellator's best pound-for-pound fighter gets the caliber of competition he deserves when he meets Eddie Alvarez in a rematch of one of 2011's best fights.

7. Gray Maynard (11-2-1, 1 no-contest, 20 points): As the winner of exactly one fight in three years, Maynard might be an example of a fighter getting ranked more on past reputation than current status.

8. Rafael dos Anjos (20-6, 17 points): One of the division's most underrated fighters is finally getting his due after dominating Donald Cerrone for his fifth straight win.

9. Pat Healy: (29-16 1 NC), 12 points: Robbed of a double win bonus after his fight with Jim Miller due to asinine commission rules on marijuana, Healy goes back to work with a consequential fight against No. 11 Nurmagomedov at UFC 165.