It should come as no surprise that Cain Velasquez is a clean-sweep pick for the No. 1 ranking in the SB Nation consensus heavyweight rankings after his tour-de-force performance at UFC 155.

And really, it also shouldn't come as a surprise that Junior dos Santos is a unanimous pick for the second spot, either. Velasquez and dos Santos have swapped the UFC heavyweight championship back and forth and have given each other their only UFC losses. Outside of fighting one another, the two are a combined 6-0 against the remainder of the top 10.

As for the rest of the new top 10, Roy Nelson made the biggest move of note, jumping up two spots from No. 10 to No. 8 after his knockout win over Matt Mitrione. Antonio Rodrigo Nogueira, meanwhile, moved up a spot to No. 6 after his smackdown of Dave Herman. Otherwise, things were relatively uneventful, as Daniel Cormier, Fabricio Werdum, and Frank Mir continued to hold down the 3-5 spots.

Each of the top nine fighters appeared on all six ballots.

This month's voters: Ariel Helwani and I from MMAFighting.com; Brian Hemminger and Tim Myers of MMAMania.com, and Tim Burke and Dallas Winston from BloodyElbow.com.

(Official SB Nation rankings policy: Fighters under commission suspension are ineligible to be ranked during the duration of their suspension or if they have licensing issues. At heavyweight, the currently affects Alistair Overeem, who as of this writing has not yet been re-licensed by the state of Nevada after serving time out due to elevated levels of testosterone). 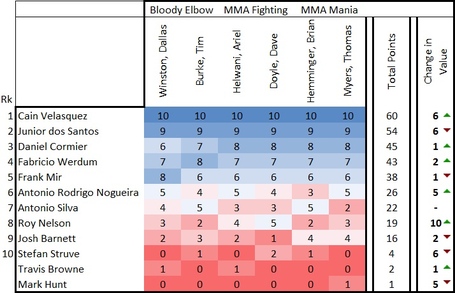