By now, there's really not much left to say. We've waited two years for this. Tomorrow night Anderson Silva, the impossibly skilled, unstoppably violent machine who, by some accounts, is the greatest fighter to ever live, will defend his middleweight title once more against Chael Sonnen, the brash wrestler who unexpectedly rose from journeyman to title contender, and still remains the only man to ever test the Brazilian's reign.

Much has been said since that fateful August night in 2010, but none of it matters now. The time for posturing is over. Tomorrow the lives and legacies of both of these men will forever be changed, and it will be pleasure to witness.

Silva pre-fight. Reigning UFC middleweight champion Anderson Silva brusquely dismissed the idea that he whispered threats into Chael Sonnen's ear during Tuesday's pre-fight staredowns. Meanwhile, a pair of his former foes explained the challenges that came into play when they fought the champ.

Sonnen pre-fight. UFC middleweight title contender Chael Sonnen discussed how a conversation with Renzo Gracie changed his approach towards Saturday's main event and revealed how he was planning to lose 20 pounds in 24 hours, which his nutritionist Mike Dolce said should be no problem.

Ortiz sentimental before final bout. Legendary Hall of Famer Tito Ortiz fondly reflected back on the ups and downs of his 15-year career in advance of his retirement rubber match against Forrest Griffin.

Patrick blasts critics over injury withdrawals. Sidelined UFC welterweight Claude Patrick took to the Underground to ask fight fans to show a "bit of respect" in regards to the recent rash of fighter injuries and dropouts.

If you can stand the Crazytown loop in the background, this Silva-Sonnen clip may be the best UFC 148 visual striking breakdown out there.

Wait, Steven Seagal had a slap fight with the former Strikeforce light heavyweight champ? No kidding.

Amid all the hype, let's not forget how utterly dominant Anderson Silva looked the last time we saw him.

Apparently Chael was everywhere yesterday, including this brillant spot on ESPN's Dan LeBatard is Highly Questionable. Hard not to love the stony silence from 3:53 to 4:05.

I'll try to be tactful and just say, B.J. Penn looks like he has a long way to go to reach the welterweight limit. 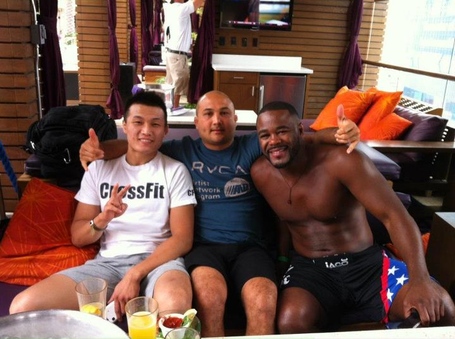 I gotta go with my boy Anderson "@J05R: @JonnyBones who you got this weekend? Anderson or Sonnen?"

SEAGAL IN THE BUILDING

Are you hungry for some UFC knowledge? Good, because I have you covered with ten facts about UFC 148: Silva vs. Sonnen II this Saturday (July 7) from the MGM Grand Garden Arena in Las Vegas, Nevada.

Typically this post only features eight facts, but seeing at UFC 148 is the biggest card of the year it only seems fitting that it deserves the biggest facts list of the year.

The event is headlined by a middleweight championship bout pitting Anderson "The Spider" Silva against Chael Sonnen for the second time and can be seen on live on pay-per-view (PPV) in the United States and Canada.

2 - Tito Ortiz has the most UFC fights in the history of the organization at 26. All but one of his professional fights have taken place inside the octagon.

3 - Neither Anderson Silva nor Chael Sonnen has ever been knocked out. Sonnen's lone TKO loss came via stoppage due to cuts.

4 - Gleison Tibau comes into UFC 148 on the longest winning streak of his UFC career at three fights.

5 - After having his first six UFC fights ending by knockout or submission, Demain Maia has gone to decision in his last seven fights. Maia will also make his welterweight debut at UFC 148 after competing in his first 19-bouts as a middleweight.