Looks like Vitor Belfort had to settle on Plan B.

After failing to secure a No. 1 contenders bid against Chris Weidman, Belfort relented on his wishes and, apparently at the request of UFC President Dana White, accepted Alan Belcher's public challenge from earlier in the week.

October's UFC 153 pay-per-view already has Jose Aldo's title defense against Erik Koch, plus Rampage Jackson's final fight with Glover Teixeira on its books. So, barring another injury epidemic, it looks like we've got the makings of a quality Brazilian fight card on our hands.

(Somebody kidnap these guys and drape them in bubble wrap, please.)

Weidman shoots down Belfort. Upon hearing Vitor Belfort's proposed idea for a No. 1 contenders match to be held in Brazil, Chris Weidman shut "The Phenom" down by declaring, "you already had your shot at the belt."

Belfort accepts Belcher's challenge. Immediately after failing to secure a bout against Weidman, Vitor Belfort posted on Twitter that he had accepted a fight against Alan Belcher for UFC 153.

Boetsch knows he'd submit Silva. Middleweight bruiser Tim Boetsch stepped out of his normally reserved shell on Inside MMA, proclaiming he was confident he could submit Anderson Silva if the two ever met.

McDonald pledges to hurt 'out of shape' Penn. Following a no-show by B.J. Penn at the UFC 152 pre-fight press conference, Rory MacDonald issued this warning to the former champ: "Last time I saw him he looked really out of shape. I don't know where his head is at in this, but he better get serious or I am going to hurt him very badly."

Now, I don't speak Portuguese, so I'm not exactly sure what Anderson Silva is saying in this latest Burger King spot. But word on the street says he's really just trolling Chael Sonnen.

Speaking of Anderson, "The Spider" + The Matrix = a match made in highlight heaven.

How does Shogun prepare for Brandon Vera? Jumping from 4,000 feet, of course. 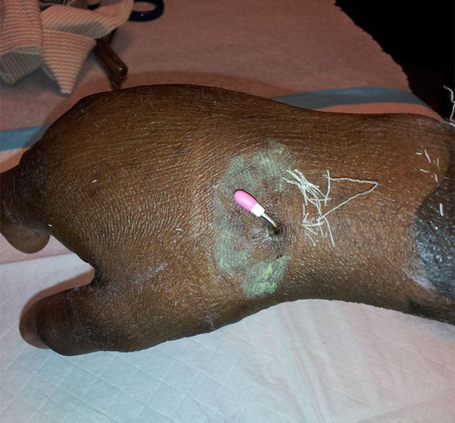 Guys I spoke to joe silva and ask to fight with the top contender #weidman here in brasil so I think this is the f... twitplus.co.uk/t/MBw

Love ya @vitorbelfort but you already had your shot at the belt and Im sure u will have another in the future.Rt now is my time though @ufc

I couldn't reduce to just one. RT @DC_Yohan Josh, who is one person that is not a fighter that you would love to punch in the face?

Today's Fanpost of the Day comes from DarthRevan, who offers a violent visual breakdown of: Elbows in MMA

The use of elbows differs greatly between different martial arts. The type of elbow thrown and the intention behind them can often be very different. So in MMA there is likely to be a great diversity in how elbow strikes are thrown. In MMA elbows are a very important strike used both whilst standing and on the ground and due to the mixed origin of fighters their elbow strikes can differ greatly. In this fanpost I will examine the various types of elbow strikes used.

Firstly I would like to point out that I am not an expert in martial arts. My experience is limited to 4 years of Tae Kwon Do (International TKD as opposed to the Olympic style TKD), 2 years of Wing Chun (a more modern version than the traditional school taught) and a very brief time learning Muay Thai. Of these only Wing Chun and Muay Thai regularly used elbows, but even between these two schools the styles were different.

In Muay Thai, one of the more common ways to use elbows is to cut the opponent. By cutting the opponent you will be able to end the fight quickly and effectively by obtaining a TKO due to cuts. At 0:50 in the video here we can see the type of elbows used that can cause cuts.

As can be seen in the video the type of elbow used are short, over the shoulder quick elbow strikes to the head of the opponent. These strikes are meant to graze the head with the point of the elbow. By doing this they maximise the chance that a cut will be caused. In the fight shown it appears that the fight is called off shortly afterwards due to a severe cut caused by these sharp grazing elbows. In MMA it is interesting to see that this technique appears a little rarer than in Kickboxing where it is one of the more common ways of winning. In fact in a post on Sherdog by "emperor", between 1st January 2012 and 30th May 2012 there have only been 6 cases of stops due to cuts with only 2 of these being directly because of elbows (Cro Cop vs Perosh and Neer vs Wisniewski).

However, there is one practitioner of elbows with the intention to cut in MMA, Kenny Florian. Florian is well known for the sharpness of his elbows and their propensity to cause cuts. For example in his fight against Alex Karalexis at UFC Ultimate Fight Night, one of Florian's elbows cut Karalexis' nose, which later resulted in the doctor's stoppage. This can be seen in the video below: