Anybody who's ever gone to their first day of Muay Thai or BJJ practice knows the feeling of being completely and utterly dismantled, and how it can change the way a person looks at themselves. It's a humbling process, to be sure, but through it a newfound sense of discipline usually emerges.

That's the logic Usman Raja is taking with the Unity Initiative. Raja, a 34-year-old fight trainer from London, has been tasked with the controversial duty of reforming freed convicted terrorists to safely reintegrate them into society, and he's found the most effective way to strip them of their "pro al Qaeda mentality" is by chipping away with a steady diet of mixed martial arts training.

"Any idea you've got of yourself will be challenged as soon as you come in here," Raja said in an intriguing feature on CNN. "Once that idea of yourself is challenged and that opening happens we are able to go in and start dismantling that perception.

"I try to unravel their Jihadist identity. Previously that identity was being validated. I say to them let's question that validity."

So far the unique experiment seems to be working. According to the CNN piece, Raja has taken 10 convicted terrorists under his wing, and successfully reshaped them all.

Of course, there's a lot more to the program than just fight training, but Brent Brookhouse made a very astute observation when he compared Raja's philosophy to the inner city boxing gyms that have long been a safe haven for troubled youths. The Unity Initiative obviously isn't an end-all solution to a complicated problem, but it's still fascinating to see the unanticipated applications and positive effects mixed martial arts can have on our society.

Belcher's manager calls out Belfort. UFC middleweight contender Alan Belcher and his manager, Malki Kawa, publicly called out Vitor Belfort over Twitter, saying Belfort had been offered a fight against Belcher for the UFC's Brazil event in October, but had yet to sign on the dotted line.

Bisping blasts flyweights. Polarizing middleweight Michael Bisping reached back into his bag of tricks to bust out this little nugget about UFC 152: "[We're] the real main event. Two big hard hitting guys. No one cares about little flyweights."

McDonald not going to call out champs. Bantamweight up-and-comer Michael McDonald refused to call out new interim UFC champion Renan Barao, though "Mayday" made it clear he feels like he's good enough to compete with Barao.

Overeem talks Jones-Silva. UFC heavyweight Alistair Overeem reiterated that he hopes to return early to fight in December, and discussed why he believes Jon Jones vs. Anderson Silva will never take place after having a conversation with the young light heavyweight champ.

Usman Raja's London-based Unity Initiative focuses on the use of mixed martial arts training to "cure" convicted terrorists of their radical views, to the tune of a staggering 100% success rate. (Check out part 2 for a look at Raja's past, and part 3 for an examination of his results.)

So now the Culinary Union is dragging Mandy Moore into their fight against the UFC? A cheap shot, but hilarious in a weird way, right?

It took only 56 seconds, but Karl Amoussou's crazy finish of Bryan Baker from Bellator 52 last week might just make the short list for submission of the year.

Court McGee and Nick Ring offering further proof that it's hard to hold a grudge after bashing someone's face in for 15 straight minutes. 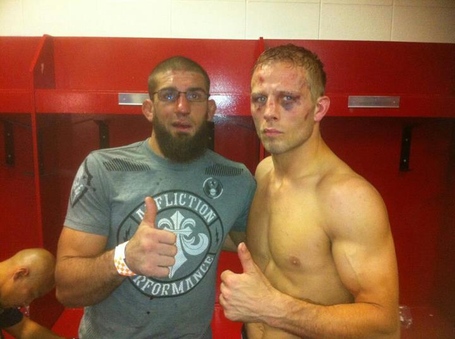 PUTTING THE HEAT ON VITOR

My next fight will be the biggest of my career! I may be taking a trip down south, very south.#UFC#belcher4champ

AND THAT'S THE END OF THAT

I read @cokersf said @rogergracie was the best grappler in @Strikeforce . I would love to prove that is not the case.

LOOK FORWARD TO IT

Now that the @UFC just announced it, I can come out of my man cave and finally post. Yes I am fighting next week on the Fox card. Thanks...

And for the record, I will NOT change my walk out song so if you dont like Justin Bieber's "Baby" sucks for you. thanks again @ufc

Today's Fanpost of the Day sees Dangalvan deliver a parting message to the boss: Suggestions For Dana White

Cut Down On The PPVs

I know. I know. This is the ninety-first time cutting down on amount of UFC shows has been suggested in the last hour, but the reason for the high frequency of suggestions is because its a real problem. Oversaturation can kill a business. Ask WCW (although shitty booking and the AOL/Time Warner merger were also big factors for the pro wrestling company's demise.)

I'm under the impression that the UFC is already locked under a contract with FOX to provide a certain amount of shows on Fuel, FOX, and FX per year, so the only events that can be lessened are the PPV broadcasts.

Before the UFC decided to run so many PPVs, a base group of UFC fans had a habit of ordering PPVs. That's the reason why the floor for UFC PPVs was pretty dang high in comparison with WWE's floor, but due to the introduction of so many more PPVs that floor for UFC PPV buy-rates is dropping dramatically. The reason is that those habitual UFC fans are breaking that habit of ordering ever PPV because they are beginning to pick and choose between the shows.

The maximum amount of UFC PPVs per year should be twelve, and honestly that could be lowered. Disagree check out how stacked these main cards would have been had two of the last four UFC PPV shows been combined.

Making a great fight isn't groundbreaking, but there is one potential bout that would be huge that is not getting the discussion it deserves. That fight is Chael Sonnen vs Rashad Evans. Personally, I think they should have coached the next season of The Ultimate Fighter.

Both fighters are in similar crossroads of their career. Despite losing to Anderson Silva twice, Sonnen is still an elite fighter and is debating to move up to the 205 pound division for fresh fights while Rashad Evans is going through the same phase as he is questioning the possibility to drop down to middleweight after losing to Jon Jones.

The potential fight that would likely happen at a catch-weight would be the best non-tile PPV main event that the UFC could put on. Sonnen and Evans both know how to sell, and the countdown special would probably be tremendous.