Not since the dog days of March have we had a fight weekend as sparse as the past 72 hours. Maybe we're getting greedy with the recent slate of weekly fights, or maybe, just maybe, the mini-break was exactly what we needed to recharge before this Saturday's blockbuster rematch.

So for now, let's just consider it the calm before the oncoming storm. Because regardless of who leaves UFC 148 a champion and who leaves a devastated shell of their former self, you can bet the biggest story to come out of next weekend won't be a TUF Live contestant re-retiring Joe Stevenson or Cesar Gracie outlining the hazy futures of Nick and Nate Diaz.

UFC 117 rewind. Travel back to 2010 to relieve the classic first fight between Anderson Silva and Chael Sonnen in its entirety, then jump back to the present with the recently released UFC 148 Primetime special.

Jon Jones, Chuck Liddell, Forrest Griffin and Frank Mir pool their championship pedigree to debate whether it's harder to defend the belt, or win it.

On Friday we alluded to Chael Sonnen's radio shenanigans, and now we've found the audio for your amusement. For the lazy, jump to 5:40 to hear things begin to escalate. (HT: Reddit)

Five points to anyone who can top the devastating, face-altering aftermath of this kickboxing KO from Saturday night. (HT: Bloody Elbow)

Sometimes it's easy to forget how earnest and likable Chael Sonnen can be when he drops the pro wrestling schtick. (HT: Reddit)

Though, "likable" probably doesn't come to mind for Anderson Silva when he sees Chael's custom Twitter background. (via @ThePeoplesCecil) 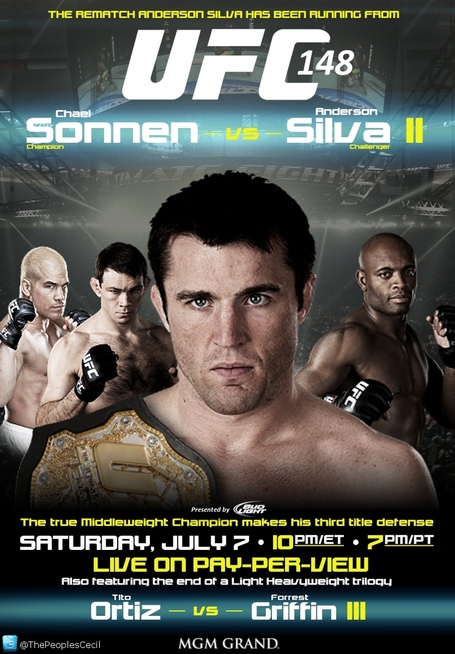 Of course, no morning would be complete without the latest installments of the UFC's Silver Spider vs. American Gangsta comic strip.

THROWING DOWN THE GAUNTLET

I want Jose Aldo. I will end his reign as a Champion.

Attn: Parents. In an attempt to avoid confusion, from now on the following names will only be spelled 1 way: Jon, Brian, Shawn, Jeff & Eric.

I feel like the pairing of "ph" is sooo elitist. "@deanrankin: @kennyflorian Where do you stand on the big Steven vs. Stephen debacle?."

ANOTHER DAY, ANOTHER INJURY

(2/2)I'm used to walking by motionless bodies since my childhood in Afghanistan. I'll walk by a few more in the @UFC to conquer the WW belt!

Hey so .... Espn body issue..... If anyone wants to see me "artistically nude" I suggest you grab a copy when it's revealed on July 13th

Today's Fanpost of the Day comes courtesy of John Nash, who looks back for: Wrestling With The Past: The Legacy Of Ed 'The Strangler' Lewis

"When the legend becomes fact, print the legend."

"Professional wrestling... has no history, only a past."

-The Phantom of the Ring

Today, June 30th, marks what would have been the 122nd birthday of one of -- if not the -- most famous, most important and most influential wrestlers to ever set foot in the squared circle: Ed "The Strangler" Lewis.

Born Robert Friedrich in Nekoosa, Wisconsin in 1890 to German immigrants parents Jacob and Mary Friedrich, Robert, or Bob as he preferred to be called, grew up big, strong, and athletic. He also quickly developed an interest and aptitude for wrestling, entering the professional ranks in his early teens by competing in "shooting" matches in which supporters would wager on him defeating men a decade or two his senior. Usually he came out the victor but in Grand Rapids, Wisconsin on January 3, 1911, he bit off more than he could chew when he took on former champion Fred Beell. Bob couldn't do anything with his opponent, who toyed with him for 7 ½ minutes before choking him out with a reverse headlock. In the second fall he did a little better, surviving twenty-two minutes before being pinned. Afterwards Beell told the audience that Bob would one day be a champion. For his efforts Bob receive $25 and a neck which he couldn't move for two weeks.

After the Beell contest Bob left behind the world of small-time traveling carnies and side-room challenges for that of big-time professional wrestling (which was more often than not the world of "worked" contests instead of "shoots").

One of his first jobs in this new career was for promoter Bill Barton who arranged a match between "Bob Frederick" and Bill Demetral in Louisville, Kentucky. Unfortunately, Bob never got news of the contest because Barton had mistakenly mailed the details to the wrong address. When Bob failed to show for the heavily promoted event Barton held the match anyway, but with Bob Managoff stepping in and wrestling as "Bob Frederick".

A week later, the real Bob Frederick (Friedrich) showed up in town ready to meet Demetral. Since the audience had already seen Frederick (Managoff) wrestle, Barton decided that Bob would need a new name. The one they came up with was Ed "The Strangler" Lewis, in honor of the former champion (and fellow Wisconsinite) Evan "The Strangler" Lewis.