Before the dust could ever settle on Anderson Silva's legacy cementing victory over Chael Sonnen, former UFC light heavyweight champ Rashad Evans sent out a fateful tweet declaring his desire to drop down to middleweight to challenge the legendary Brazilian. Many of us were intrigued, and rightly so. A lighter Evans would dramatically change the dynamic of the 185-pound division.

Unfortunately much of that enthusiasm was quelled just a few days later, when the fighter's management team issued one giant backtrack of a statement saying Evans might have gotten a bit ahead of himself and a drop down in weight wouldn't be in his future plans.

But the one tricky thing about that: apparently no one gave Rashad the memo. You see, according to "Suga" there's a very real chance his move down to 185 pounds actually comes to fruition.

"I've been thinking about going down to middleweight lately," Evans mused in a recent interview with ESPN. "I haven't totally made up my mind. It's something I'm going to think about a little more in the coming months and see where my body's at, but I'm definitely giving it serious consideration. The odds of me moving down to 185 are 50-50 or better."

Of course, the only minor gripe some have had with Evans' potential drop is it could screw over all the guys who've taken their lumps to slowly trudge up the divisional ladder. It's true middleweight has become surprisingly stacked -- with Michael Bisping, Hector Lombard, Chris Weidman and Alan Belcher all jockeying for the next title shot -- but Evans knows the pain of being leapfrogged in the division pecking order all too well.

So, almost surprisingly for someone of his stature, "Suga" is willing to earn his stripes instead of being gift-wrapped a title shot.

"If I had the chance to fight Anderson, it would be a dream come true," he concluded. "I'd like to go right into a title fight, but realistically there are other contenders at 185, and to skip over everybody wouldn't be fair. So, it would make sense for me to establish myself in the weight class and have a fight or two, whatever the case may be."

Evans vs. Weidman, anybody? Evans vs. Belcher, perhaps? I don't know about you, but either of those sound just fine to me.

Evans 50-50 on middleweight move. Former UFC light heavyweight champion Rashad Evans clarified his intentions to move down to middleweight, saying he was "50-50" on the idea at the moment, and he'd understand if the UFC wanted him to fight a few contender fights before meeting Anderson Silva.

Weidman says he'll finish Silva. In the wake of his violent victory over Mark Munoz, newly minted middleweight contender Chris Weidman called out Anderson Silva, declaring he wouldn't just be happy beating the champ, he wants to finish him as well.

UFC on FUEL 4 ratings. UFC on FUEL 4 averaged 211,000 viewers and hit a peak of 289,000 viewers during Chris Weidman's shellacking of Mark Munoz, making for the third-most watched day in FUEL TV's history.

McCall talks fighter pay. Top UFC flyweight Ian McCall dispelled some of the outrage surrounding his reported purse of $9,000 for headlining UFC on FX 3, taking to the Underground to reveal a $25,000 bonus sent to him by Dana White, plus additional cash for a main event sponsorship.

As you can see by the title of this vid below, Tito Ortiz is ANGRY about Forrest Griffin taking TRT for his retirement bout, and he wants to tell all you youths out there how gosh-darn unfair it is.

There's a lot to love here, but the two Silva impressions take the cake for me.

You know how Sagat from Street Fighter looks totally rad because of those scars? Well, former Polish fighter Popek Rak actually paid someone to cut him up like that, just 'cause. (NSFW: This video is exactly what you think it'll be.)

Our good friends Nate Wilcox and Zombie Prophet joined forces to start up a YouTube channel. Their mission: to compile more of the most entertaining MMA videos of the day. There's a couple gems in this inaugural playlist, including a disturbing video of a sanctioned MMA bout between a pair of 6-year-old Armenian kids that may or may not cause you to throw up in your mouth.

What does having your face exploded open with a standing elbow look like? Ladies and gentlemen, I present to you Mark Munoz: 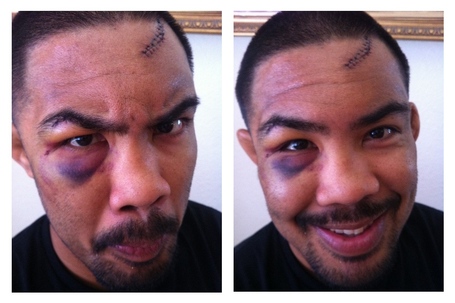 SEEMS LIKE VINNY MAY BE JOINING A CERTAIN ORGANIZATION

What would that be? I'm curious... RT @SMGathletes Leaving for Vegas tonight for a meeting in the morning. I cant imagine why ;)

A LITTLE TASTE OF JONES VS. HENDO

Today's Fanpost of the Day comes from Dave Strummer, who tells a story anyone with gym experience can relate to: From Beef to BFF: Post-Fight Makeups Are Natural

It's a ubiquitous scene in combat sports: two men who spent several months calling each other names, and several minutes trying to dismember one another in the most painful manner possible share a sweaty embrace and a few kind words just seconds after the carnage draws to a halt. These post-fight love-fests fuel the widespread opinion that the vast majority of pre-fight beef is manufactured, but just because two fighters seem genuinely friendly after a fight, doesn't mean they weren't genuinely hostile before and during.

For people who are wired to fight, the need to get involved with physical conflict can be almost overwhelming. Pro Football Hall of Fame safety Ronnie Lott used to say that if it wasn't for football, he would be out brawling in the streets, because he needed to hit something, one way or another. When you need something like that, you end up really, really appreciating anyone or anything that helps you get it. And in combat sports, nobody helps you more than your opponents.

One thing I don't tell many people (until now, apparently) was that I initially got into martial arts, shortly after college, as a way to manage a series of brutal anxiety attacks I'd been experiencing. I was, and remain, strongly opposed to psychiatric medication, so a psychologist suggested I needed to cook off some of my ever-present anxiety by exhausting myself as much as possible. I'd always been interested in martial arts, so I looked in the yellow pages, found a studio near me (which just happened to be taekwondo) and went for a class.

I immediately enjoyed the discipline and the training, but at first, it didn't really do all that much for my anxiety. Then, a couple weeks after I started, when I was still very much a white belt, my masters decided it was time for me to start sparring. The masters at my dojang were highly competitive athletes, straight out of Korea, and they maintained a strong opinion that the best way to learn anything was by getting your ass kicked.

So it was that on my very first day of sparring, suited up in smelly, borrowed pads, I got matched up against a blue-belt former marine wearing a permanent scowl. At this point, I felt ok. "Surely," I thought, "surely this guy is going to take it easy on me, since I'm such a newbie." I smiled at him as we stood waiting for the signal to begin. It wasn't returned.

About a second after Master Choi barked "sijak!", my new, bald, friend launched a nasty roundhouse kick at my spleen. Rather than block, I turned away, ensuring that rather than hit my chest protector, the shot landed flush on my unguarded left kidney. A wave of pain went through me, but along with it, there was a wave of something else, something I hadn't really felt before -- a sort of preternatural calm and determination. In that moment, I almost immediately stopped thinking about my back. I also stopped thinking about protecting myself from more strikes, which he was landing at will. At that moment, the only thing that mattered to me was to hit this dude, hard and often, until someone made me stop. I lashed out with whatever handful of techniques I had learned to that point, but I put everything behind them, and by the time they stopped us, I had certainly lost, but I had also landed more than I had any expectation to at that point in my training. Masters Kim, Kim and Choi were all grinning at me when it ended.