"My takedowns are pretty good. I'll get him down, and I think, I really do believe, that I can submit him."

And with that, Chris Weidman inserted himself into the UFC middleweight title picture. Of course, his utterly stunning, overly violent destruction of Mark Munoz minutes earlier didn't hurt either. It was a star-making performance, to be sure; the kind of domination that opens fans' eyes and evokes memories of a young Jon Jones roaring through Ryan Bader.

But plenty of other columns will be written about the merits of a Weidman vs. Silva title fight. Instead, it would be a disservice for me to gloss over the fact that last night's stoppage easily rivals -- and may even surpass -- Joe Warren vs. Pat Curran for the worst stoppage of the year.

Munoz didn't try to brace his fall. He landed on his head. He was essentially out the moment he got split open by Weidman's standing elbow, and Josh Rosenthal was right there. Allowing things to continue for a few shots is fine. But 17 unanswered punches? Munoz is one of the nicest guys in the sport, and the scene of his cracked open forehead gushing blood onto the canvas as he half-consciously writhed around to mount a defense was unnecessarily gruesome.

Rosenthal is normally fantastic, but this was a tough one to excuse. Understandably, Stephan Bonnar was furious on the post-fight show.

"That's our lives we're dealing with," Bonnar fumed. "And when stuff like that happens -- I love Josh, I think he's a great referee -- but there needs to be some penalty. Some punishment, a suspension or something."

"This is a great referee, but he's also got a great view. He can see everything. I could see from way up here this fight needed to be stopped. In fact I was yelling, pleading, and begging. I don't know what took so long. Mark Munoz, and all athletes, are counting on that referee to keep you safe."

Not surprisingly, a majority of last night's Twitter dialogue amongst fighters focused on the same exact point. But perhaps Cyrille Diabaté summed up the urgency of the situation best.

"The first death in an official MMA match will be due to a ref not doing his job," he tweeted. "SCARY..."

Weidman explodes Munoz. Ferocious up-and-comer Chris Weidman destroyed Mark Munoz with a standing elbow and salvo of punches in the second round of UFC on FUEL's main event. For more, check out complete results, post-fight bonuses and press conference video, reaction from the pros, and video highlights of the knockout.

TUF coaches announced. Former British featherweight Ross Pearson and Australian lightweight George Sotiropoulos will serve as coaches on TUF: The Smashes, the UFC's next international version of The Ultimate Fighter.

UFC 147 drug tests. The drug tests of all 22 fighters for last month's UFC 147 event came back negative for illegal and banned substances.

Seriously, what a finish. Is Weidman ready for Anderson Silva?

Fox 11's James Koh got a chance to sit down with "Bones" Jones, and he definitely didn't waste it. Koh asks Jones why he wouldn't want to fight Anderson Silva, but then rebuffs Jones' answer, leading to an interesting exchange of ideas. Great interview all around.

Georges St. Pierre pretending to be a doctor and fighting stop-motion ninjas? Yup.

(Props to Matthew Goldstein for the find.)

It's Ronda Rousey's first red carpet, and what does she do? If you guessed put Kim Kardashian on blast for only being famous for "sucking d---," then you guessed right. (The sneaky best part of this clip: the comical pause when she's debating whether or not to mind her manners, then you see the click in her head when she's like, 'eff this.')

So Joe Rogan is ridiculously built for a 44-year-old, just in case you were wondering. 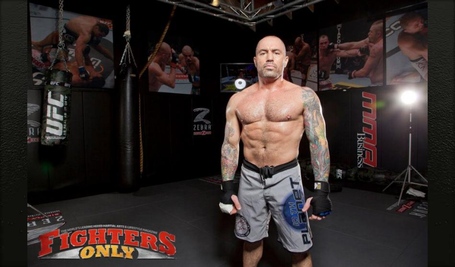 (Photo via Fighters Only)

CHRIS WEIDMAN IS A DANGEROUS MAN

@danawhite There's no way @SpiderAnderson can beat @chrisweidmanufc. Give his his title shot, he deserves it bro!!!

Well, that sure made me feel better about myself. #UFConFUEL4 awesome job by @ChrisWeidmanUFC, sick timing on the elbow.

Does @ChrisWeidmanUFC get the next title shot against Anderson Silva?? What a huge win #UFConFUELTV

Wow so that was a late stoppage, wtf?! So many unnecessary shots.

I fully agree on letting fighters continue, but fighters safety is suppose to be #1 concern and it's in the refs hands, that was way late!

The first death in an official MMA match will be due to a ref not doing his job. SCARY...

Did somebody say Matt Hughes? twitter.com/danhardymma/st…

@lovemma1111 this is not about the sport sweetheart. In real life he is an asshole.

@lovemma1111 trust me mate, nobody in mma likes him.

There are some really, really, really stupid people on Twitter. Because he was a champion it doesn't excuse him from being morally inept.

Never knew a fight can be won by strikes thrown. I feel sorry for my fans.

Funny hearing the commentating @joerogan s hand must of been sore from stroking Forrest during the (cont) tl.gd/i9ljk3

I still won the fight. Thanks for everything fans or now family. I won't tweet another thing about this fight. We all know the truth.

@titoortiz Hey man, I'm sorry to hear you feel that way. I just try to be honest, I never mean to offend, and certainly not you.

@titoortiz I'm sorry about your last interview getting screwed up, too.I would love to have you on my podcast to go over the memories.

@titoortiz I really enjoyed our last interview, but I think the MMA world would love a long conversation with us to wrap up an epic career.

Today's Fanpost of the Day comes from Cory Braiterman, who takes a look at: The Infinte Matches to Make at 185 Following Chris Weidman's Win Over Mark Munoz

As you may or may not know, there is a bit of an epic kerfuffle in the middleweight division. The undisputed king of the mountain is obviously Anderson Silva, who is on a 16-fight win streak and holds win over the (USA Today/BloodyElbow consensus) ranked #2, 4, 8, 15, 16 and 19th ranked contenders. The man at #3 just got annihilated by #9, so we're now left with the following individuals who've yet to face the Spider, and are in the UFC as potential opponents:

#6 Tim Boetsch. 15-4, just took out a top-5 guy in Okami. He has some mediocre/bad losses on his record however (Hammill, Brilz, Matyushenko and a very respectable loss toPhil Davis). He'll be facing #11 Hector Lombard in ten nine days.

#9 Chris Weidman. He'll be drastically moving up after obliterating Munoz - I will very conservatively state top5, possibly top3. Undefeated, but not completely tested at only 9-0.

#11 Hector Lombard. 31-2-1-1, but against incredibly watered down competition. His best wins are against a very green James Te Huna five years ago and fellow prospect Alexander Shlemenko. Redneck Judo will be his toughest fight since he faced then wunderkind Gegard Mousasi.

#13 Alan Belcher. 18-6, and looked excellent against Rousimar Palhares, but Paul Harris, Jorge Santiago and uh... Ed Herman? Are his best wins throughout an eight-year career.

Found something perfect for the Morning Report? Just hit me on Twitter @shaunalshatti and we'll include it in tomorrow's column.