I just can't do it. I've looked over the statistics. I've analyzed the numbers. I've watched the tape. I simply cannot find a reasonable case - either by qualitative judgment or quantitative evidence - for concluding Tito Ortiz will defeat Forrest Griffin at UFC 148 next Saturday.

To be sure, I am not saying Ortiz won't defeat Griffin. This is the MMA, a sport where part of the ability to win is a function of how well one controls chaos. I'm simply suggesting the belief or suggestion Ortiz will win is rooted in blind faith or the idea he'll catch lightning in a bottle as he did against Ryan Bader in an improbable upset.

The qualitative case against Ortiz is fairly obvious. He's only won one fight since defeating Ken Shamrock in October of 2006 (which, as I mentioned, was an upset that'd be hard to duplicate again). His style of offense is antiquated, his abilities are no longer superlative compared to his peers and at age 37 is no longer the athlete he once was. There's also the neck and back surgeries among however many untold other ailments Ortiz currently suffers. Suffice it to say, Ortiz has had an illustrious career and deserves his Hall of Fame honors, but it's the right time to retire.

Then there's the quantitative evidence against Ortiz.

Ortiz and Griffin have fought twice and the data related to Ortiz evidences the former champion's decline. Here are those numbers from UFC 59 in April of 2006: 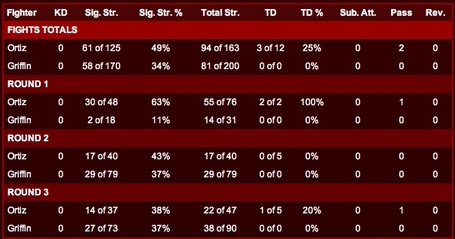 As you'll recall, Ortiz won by split decision. He had a monster first round where he did what Ortiz once did best: take fighters down and smash them as he stood inside their guards. However, Ortiz's offense declined precipitously from there (yet, judge Abe Belardo gave Ortiz a 30-27 decision). He stayed busy with takedown attempts in the second, but could get none and was outstruck. In the third, he was able to secure one takedown, a guard pass and accrue the MMA equivalent of 'riding time' to take the third on some of the judges' score cards, but was outstruck again by the then-upstart in Griffin.

Then came their second meeting in November of 2009 at UFC 106. The numbers for that bout are as follows: 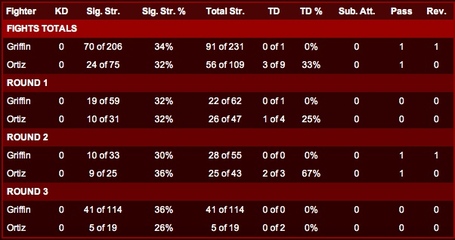 You'll notice a couple of changes from the first to the second fight, which Griffin took by split decision. Despite being able to land two of three takedowns in the second round of their second bout, Ortiz was barely able to execute any offense from Griffin's guard. Ortiz, once lauded for his incredible base, was also reversed and even had his guard passed. In addition, while the trend of Ortiz fading throughout the fight continued in their second bout, the decline was much more pronounced the second time. Ortiz failed on a mere two takedown attempts and managed to land an anemic five of nineteen punches.

This decline is revelatory because it suggests even when Ortiz is able to put himself in his historically best position to execute offense, he isn't really able to do so to any meaningful degree.

So, after two fights together and distinguished but tough careers in the Octagon, how do Ortiz and Griffin match-up today? Here's the FightMetric tale of the tape: 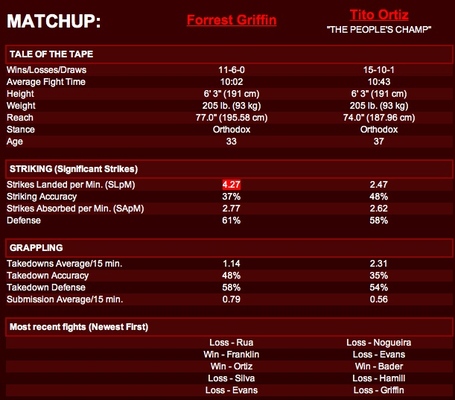 There are a number of ways to analyze these career numbers, but what stands out to me is Ortiz's fairly ho-hum career percentages on takedowns and the troubling evenness with which he absorbed punishment relative to dishing it out. For a fighter who basically needs the takedown to do much of anything offensively, he's only been historically successful in getting to that position for 35% of the time. It's true his numbers were better before the losing skid began with the second Chuck Liddell fight, but it also highlights Ortiz's precipitous decline.

Perhaps most troubling for Ortiz's chances are two unfortunate 'firsts' in his career that these numbers don't show: he's been stopped by strikes in back-to-back losses in his last two fights; and during his most recent bout against Antonio Rogerio Nogueira at UFC 140, he was stopped with strikes in the first round. Neither had ever happened before (although Ortiz was submitted in the first round to Guy Mezger at UFC 13 in his second career fight). Stated plainly: Ortiz's ability to absorb punishment - particularly to the body - has been severely compromised.

If my luck with these columns in terms of their predictive success in getting fight complexion correct continues (see here and here), Ortiz will smash Griffin in a scintillating beating from pillar to post. I see that as unlikely, but let it be known forecasting the 'look' of fights can be tricky.

There is one stat, though, that should be underscored because it sheds a very positive and informative light on Ortiz's career: total fight time. Ortiz ranks second all-time with 4:45:53 spent in fights in the UFC Octagon. If Saturday's fight goes longer than 3 minutes, he'll pass B.J. Penn for top honors in that spot (at least until Penn fights Rory MacDonald at UFC 152).

That, among all other statistics, is arguably the most telling. Ortiz is no longer the fighter he once was, but that's the story of any fighter who is lucky to have fought at this level as long as he has. The real truth of it all is that Ortiz has done enough in the Octagon. He's notched enough wins, made enough money and earned enough fame all while promoting MMA to the masses along the way. He's not meaningfully adding to his career by staying any longer.

It's time to do something else. It's what Ortiz needs, the fans are asking and what the numbers say.

All quantitative data provided by FightMetric except where otherwise noted.