Lately it seems like the UFC Hall of Fame -- and to a greater extent, what the Hall actually represents -- has became a surprisingly divisive topic.

First there was the Brock Lesnar dilemma. Both Randy Couture and Kenny Florian vouched for the big guy's credentials, but the community was decidedly split on honoring a man with a career 5-3 record. Then came the announcement of Tito Ortiz's upcoming induction, which nobody could've foreseen back when Ortiz and UFC President Dana White were training to punch each other in the face on the classic 90-minute special, Bad Blood: Dana White vs. Tito Ortiz.

And now Frank Shamrock wants in on the action. The five-time UFC champion voiced his displeasure at not being included in the Hall of Fame by ripping White a new one on Spike TV's MMA Uncensored Live.

"I believe I should be in the Hall of Fame," Shamrock declared. "But it ain't my Hall of Fame. If they want to put me in, that's great. It's not going to keep me up at night.

"It's definitely personal between Dana and I. I've done everything I can possibly do for this sport. I hope that would include UFC. You know, Dana and I don't get along. I think he's a total douchebag and a bully. I just, I got no breath for him."

Shamrock's feud with White is well documented, though given his current employment with Strikeforce, referring to your boss as a "douchebag" probably isn't the most tactful move.

It's tough to deny that résumé.

Shamrock calls out White. Strikeforce commentator and former UFC champion Frank Shamrock blasted Dana White, referring to the Zuffa boss as a "total douchebag and a bully," while repeating he should already be a member of the UFC Hall of Fame.

Sonnen pulls a Sonnen, hangs up on interview. A local radio interview between Portland's John Canzano and UFC middleweight contender Chael Sonnen quickly went south when Canzano brought up the fighter's criminal past, and Sonnen responded by hanging up and saying he hoped Canzano wasn't still beating his wife.

Couture talks Silva vs. Sonnen II. Legendary multi-division champion Randy Couture discussed the unique dynamic to Silva-Sonnen II, why Sonnen's victory over Nate Marquardt altered his career trajectory, and how next weekend's rematch is going to play out.

White brags about hacker arrest. UFC President Dana White gleefully bragged about his involvement in the arrest of Mir Islam, aka JoshTheGod, who was taken down by FBI agents for his role in a credit card fraud ring.

UFC cuts Rocha. Carlos Eduardo Rocha was released by the UFC after losing consecutive bouts to Jake Ellenberger and Mike Pierce, the latter of which he referred to as '15 minutes of 'bulls---'.

Among the topics found in Matt Serra and Forrest Griffin's conversation: shrinkage, man touching man time, dropping a deuce in Griffin's house, and giggle fits towards Strikeforce. Seriously, this needs to be a weekly show. (And yes, Serra visited Sonnen too, so just click here.)

Jose Aldo's destruction of Chad Mendes -- and the ensuing celebration -- is already classic footage, but when paired with a Brazilian broadcast team on the verge of losing their minds, it's hard not to get goosebumps all over again. (HT: Reddit)

Way back in 2003, Mr. Sonnen faced off against another unknown light heavyweight, Forrest Griffin, at the IFC: Global Domination single-day tournament. Other members of the absurd eight-man field: Shogun Rua, Babalu Sobral, Jeremy Horn and Trevor Prangley. (Just in case you were interested, Babalu decisioned Horn to win it all.) Props to Leon MacCormack for the find.

Check out the "most helpful" Amazon review for Chael's book. Click for supersize. 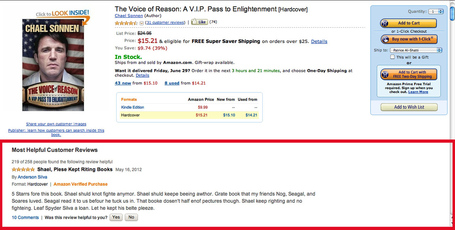 And of course, the next installment of UFC 148's The Silver Spider vs. The American Gangsta comic strip.

WAKING UP WITH THE BUFF

"@AgainstTheMass: @ufc Bruce Buffer should make alarm clocks."The "IT'S TIME!" APP for iPhone & Droid to be out soon w alarms n much more!"

.@WBCBoxing just reminded me today is the anniversary of the ear biting incident. Love you @holyfield. You are a true champion.

OKAY, THIS NEEDS TO HAPPEN

Ok...I'm totally thinking about growing it back. What do u guys think? :) twitter.com/AmericanKiddMM…

(Props to the appropriately named @Hugh_Jaload for the find.)

Today's Fanpost of the Day comes from Andy Davis, who asks for your opinion on: The Greatest Fight That Never Happened

Joe Silva has the best job on the planet. This man spends his days planning fights. He creates a path for a contender to rise to the championship. He gives the newcomer interesting challenges. He gets to claim that he set up the legendary fights that no one will forget. The man lives and breathes fighting.

He also has the worst job. Fights fall through all the time. Fighters get injured, they fail drug tests, and sometimes (expletive) just happens for the weirdest of reasons. And then he has to scramble to find a replacement, all the while bearing the disappointment of the fight that didn't happen. But perhaps worst of all, everyone else thinks they could do his job better than he can. And far more often than decrying a fight that is planned, we complain about the fights that don't happen.

As fans, the greatest fights are often the ones that didn't happen. As we know, the idea of a fight is often very different from what actually happens. Fights that look fantastic on paper don't always deliver, and we're often pleasantly surprised by fights that weren't very appealing. With that in mind, we as fans don't anticipate a stinker. Every (imaginary) fight is FOTY, even if we know they aren't going to happen. We love to pine for the fights that should've happened. Perhaps the moment has passed and two greats never met, like Randy/Fedor. Maybe there's still a chance, like GSP/Diaz. Or maybe there's a matchup in your head that you know will never happen, but it should, damnit!

My own personal favorite was Condit/Penn. When it was announced, I was merely excited. Then our own NickTheFace did his magic, and I went from excited, to drooling, to BRRRAAWA. I spent weeks anticipating, watching tape, trying the figure out how it would play out. Words do not describe how excited I was. I was (expletive) pumped.