What did we get from yesterday? Well, two title matches are officially on the books for August -- Ben Henderson vs. Frankie Edgar II and Ronda Rousey vs. Sarah Kaufman -- but we already knew those were going to happen sooner or later, so they really aren't anything new. And the UFC bantamweight situation got a late-night solution, even if it was basically the one we all expected.

But the sneakier, more amusing story arose when newly-minted middleweight contender Alan Belcher pretty much put Michael Bisping on blast in front of the entire MMA community. Out of the blue and completely unprovoked, Belcher proclaimed Bisping to be nothing more than a "professional point fighter" who "believes he's better than he is," while saying the fans would love watching Belcher put the Brit "to sleep."

Now, this isn't the first time Bisping has felt the sting of the point-fighting sentiment from one of his peers, even if it isn't really that deserved. (Eight of his 12 UFC victories have ended via TKO.) Still, it's interesting to see him remain the division whipping boy after the minor perception-shift that came from his near-win against the unanimous No. 2 guy, Chael Sonnen.

Though when it comes down to it, I guess that comes with the territory of being a big name, and, ahem, someone without the brightest reputation for civility. But anyway, Belcher has now fired the first shot, and the UFC often listens to what the community wants. So, Belcher vs. Bisping next? Any thoughts?

Alan Belcher calls out Michael Bisping. Fresh off the most significant win of his career, UFC middleweight Alan Belcher snidely referred to Michael Bisping as a professional point fighter and said he would love to put the Brit to sleep for his next fight.

Urijah Faber, Dominick Cruz situation partly resolved. Members of Team Cruz were adamant in proclaiming their desire to keep Dominick Cruz as their TUF Live coach, and they ultimately got their wish, as Cruz will remain on the show throughout the rest of the season. In the meantime, Urijah Faber will fight a yet-to-be decided opponent for the UFC interim bantamweight title at UFC 148.

So, let's just say that this Brazilian guy isn't exactly a Chael Sonnen fan, and leave it at that. (HT: Bloody Elbow)

Go ahead and watch this free fight between Junior dos Santos and Gilbert Yvel and just try not to think about how much you can't wait to see Cigano get back to demolishing skulls later this month. (Click to watch the facial reconstruction.) 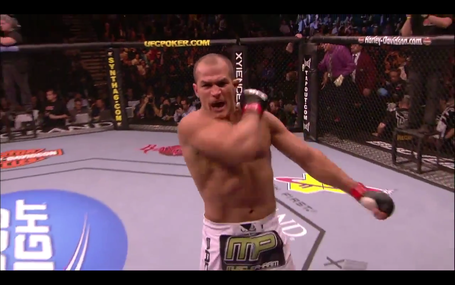 Now we know Georges St. Pierre is not only scared of heights, but aliens as well. Somehow Carlos Condit can use this knowledge to his advantage.

Ever need proof that mean-mugging runs deep in the Diaz family blood? Look no further than the elderly fella on the right. Yup, that's Nate's grandpa. (HT: Middle Easy) AT LEAST SPELL HIS NAME RIGHT

Just watched the fight again.1&3rd round where mine. Maybe a rematch 5 round fight this time? What U say Hindricks?

RECIPE FOR A FIREFIGHT

WHO IS THIS AND WHAT HAVE YOU DONE WITH BIG RIG

No worries guys. I always shave my beard after my fight and I ALWAYS grow it back. : )

Today's Fanpost of the Day sees BVandDietPepsi emerge as the voice of reason in the face of the FOX ratings crisis: Ratings are Irrelevant, Except when they aren't, Deli Sandwiches, and Why the Sky isn't Falling on the UFC on FOX

The problem is that the entire basis of using ratings as a measuring stick for the episode that the ratings show, is abjectly wrong.

Say you're at a deli, and feel like a sandwich. You look at the specials and see they have a Pastrami with Havarti and mustard on rye. Hmm. You've never tried pastrami personally (and if that's the case we can't be friends), but you've always heard about it and wanted to check it out. You place your order and wait by the end of the counter.

Now at this specific instant, what are the odds that you'll order that sandwich again? Hell if you know, right? You haven't even tried it yet! Would it be safe to assume that you would have a much, much clearer, succinct opinion on your future purchasing of the Pastrami on rye once you've eaten said sandwich? Of course.

That first option, in a nutshell, is how people who kneel to ratings look at television viewership.Back in our days of wrestling, people used to see that Nitro got a 3.8 and Raw got a 3.2 and assumed that more people watched Nitro (correct), because Nitro was a better show that night (incorrect). The biggest factor that went in to the ratings for that week's shows, were the quality of the previous shows, ESPECIALLY to casual viewers, which is whom I'm talking about here.

If Dana and Lorenzo and co. are adament on pushing the product over the superstars, then they finally got it right. It took them three shows, but they got it right. In the first FOX show, they pushed the prestige of a UFC Heavyweight Championship fight and extensively profiling only dos Santos and Velasquez (head-scratchingly leaving off Bendo and Guida). When that plan backfired, they focused on name fighters who could actually flesh out the product, instead of a flash knockout. Evans, Davis, Bisping, Sonnen, Maia...these were guys who were very hard to stop early. The problem was that it fizzled because they fleshed it out a little too much, and the fights themselves weren't exciting or dramatic. So third time's a charm, right? The UFC eschews names totally, to the point that they stupidly made almost no-effort to build up ANYONE on the card publicly, especially Miller or Diaz. Regardless, they put eight guys on the main card who have an outstanding mix of technical skill, excitement, and durability, and they finally get that explosive night of fights they wanted. Surely they're scratching their heads today, as are a few of you, I'm sure. But that's how ratings work. Chris Weidman and Demian Maia are more to blame for these miserable ratings than Alan Belcher and Rousimar Palhares. The sky isn't falling for the UFC here? Why?

The power of word-of-mouth is still, in 2012, the most dangerous and cost-efficient advertising strategy in existance today.