Morning Report: Nate Diaz Puts a Stamp on the FOX Violence We've All Been Waiting For

It only took seven months, an hour with 59 minutes of talking, and another two hours of largely lethargic decisions, but the MMA oblivious public finally scored a taste of what mixed martial arts is truly about.

Yes, UFC on FOX 3 delivered and it delivered hard, offering up four matches that epitomized the unique visceral splendor of our sport on a national scale. The winning formula: get two massive men to club each other in the brain like they were trying to pop the cork off a champagne bottle, segue seamlessly into a war of grappling attrition that gets Joe Rogan to bust out terms like ‘twister' and ‘banana split' to a bewildered audience of millions, and close with two absolute wars (the last of which nearly ends with the first severed tongue submission in UFC history), to stroll into the night with three newly minted contenders and a new legion of violence converts. Like Dana White said, it was pretty much perfect.

UFC on FOX 3. Even after the dust settled, our comprehensive coverage of UFC on FOX 3 continued with fight night results, post-fight press conference video, bonuses, medical suspensions, post-fight interviews, exclusive photos, preliminary ratings and a look from the morning after.

Weekend fight results. Catch up on the rest of the combat sports weekend with results for TUF Live, Bellator 67 and Super Fight League 3, along with Floyd Mayweather vs. Miguel Cotto results and photo galleries.

Nate Diaz to wait for title shot. Following his victory on Saturday night, Nate Diaz will remain on the shelf to fight the winner of Ben Henderson vs. Frankie Edgar for the UFC lightweight championship.

It's always a little crazy to see how the Diaz brothers can draw people into a firefight simply by throwing up their hands and yelling. It works even when we know it's coming. It'll be interesting to see how Bendo/Frankie responds.

Diaz wasn't the only top-10 lightweight on display this weekend. Bellator lightweight champion Michael Chandler returned to action for the first time since his coming-out party last November, and it didn't take long for him to put the leather on Akihiro Gono.

Koscheck-Hendricks was a solid scrap and Johnson-Barry was as blistering as expected, but the sneaky top-candidate for fight of the night had to be Alan Belcher vs. Paul Harris. Who else was teetering on the edge of their seat when it looked like Toquinho was about to rip Belcher's knee right off his body?

Akihiro Gono's unfortunate 56 seconds against Michael Chandler looks like they'll be his last, as the 37-year-old PRIDE veteran reportedly retired following the match. It only seems appropriate to sign off with a look back to the hallmark of his younger days: ridiculously grandiose ring entrances highlighted by red afro wigs, snappy choreography, back-up dancers and Japanese superstar DJ Ozma. (HT: Reddit)

So, Kultar Singh Gill cruised to a first-round KO at Super Fight League 3, and then did this, (click to start the gif): 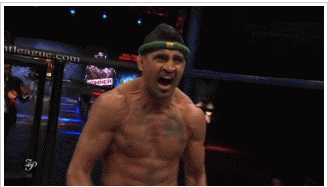 Close one, I would give it to kos but I think judges say Hendricks @UFCONFOX

I had Koscheck winning the fight but that was a close one. What did u guys think? I think the debate will be over who won the 1st round.

LAUGHING AT THE DANGER ZONE

Belcher is playing with fire

@alanbelcherufc impressive.. escaping the bear trap and smashing it to pieces! @ufconfoxsports

Even in defeat, there is something oddly satisfying about trying to sleep with a cracked nose and blown ankle #thefans #theoctagon @UFC

Krotchcheck loves that finger jab to the eye... its becoming his signature move!

Today's Fanpost of the Day sees unambig don his teacher's hat to take a look back at fight night: Diaz vs Miller: Unambig report cards

John Hathaway (B) vs Pascal Krauss (B-)

No surprises here. Hathaway came well prepared with solid knees and good wrestling and standup, besting the German fighter, who earned a little respect in defeat. I think Krauss was thrown a tough challenge in his debut, but he definitely belongs in the UFC. And I think lesser fighters would have been finished after that first knee by Hathaway in the first. Good showing for both fighters. Only you wouldn't know it because the New Jersey fans booed it lustily, demonstrating that if brain cells were a commodity in New Jersey, the state would have the GDP of Zimbabwe.

I was really impressed with Dodson following his bantamweight showing in TUF. No longer. Truth be told, I thought Tim Elliott worked him over thoroughly, and if Dodson hadn't nearly poked his eye out in the first round, Elliott would likely have been the winner. Although Dodson probably scraped by in the first two rounds, he was beaten convincingly in the third, looking slow and trying to nurse his boo-boo.

Having said that, the fight was great. I loved the speed, the movement of Elliott, and the unorthodox moves. I seriously hope Elliott gets another chance because he is something to behold. As awkward and weird as he is, anybody who does cartwheels and flips during a fight is a guy I want to see fight again.