UFC fighter pay is a constant issue. Why shouldn't it be? Professional athlete salaries are typically treated as public knowledge and are in any case interesting. Zuffa's choice to keep matters private (except official fight purses declared by commissions) only increases fan interest. If things are a secret, you want to find out what the secret is. That impulse will never wane.

That's especially true in light of FUEL TV's recent trip to UFC welterweight Josh Koscheck's home in Fresno, California. For a guy who has to fight to earn money, he seems to be earning quite a bit. 'Seems' being the operative word. Koscheck is a college graduate and obviously a very intelligent guy, so we have reason to believe his own personal financial management is in order. Still, wait until you see this place and all the toys he has. I'll admit I never pegged him to live that large. If he's been getting bonus checks, those are mighty hefty.

Be sure to check out the FUEL TV piece linked in our top 5 stories section. Also of note: former UFC heavyweight champion Tim Sylvia is still out there asking for a return to the UFC. How long do you think he has to ask before he either gets an opportunity or realizes that's never coming? I say at least another six months.

Nate Diaz Flies Family Flag. With Nick Diaz on ice for now, Nate Diaz is the one representing the family name.

Lack of Star Power at UFC on Fox 3 Will Test UFC Brand. Without any major stars on the card, this weekend's fights could prove just how much the UFC brand by itself can draw ratings on television.

Tim Kennedy Talks Dwindling Strikeforce Roster. The Special Forces soldier speaks to Bloody Elbow about the challenges of fighting in Strikeforce now that the competition roster is shrinking.

Daniel Cormier talks about how wrestling helped him overcome the loss of his daughter:

And here's Josh Barnett discussing fighting at an early age:

Jon Jones' life days out from his fight with Rashad Evans gets documented in 'On The Brink':

Our final viewing numbers for Invicta FC One were 233,580 we are appreciate your support and interest in WMMA andInvictaFC next event

Depression and suicide deserve a hell of a lot more than 140 characters. 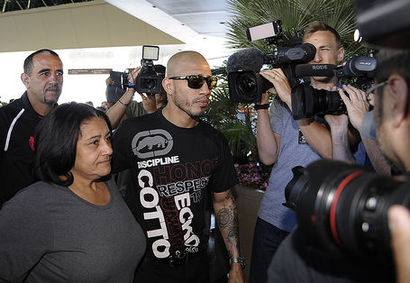 Here's Miguel Cotto. Yes, the Miguel Cotto. The one who is reportedly going to make $8 million for his upcoming bout with Mayweather.

Today's Fanpost of the Day comes courtesy LYHL and it's a look at how the featherweight division stacks up. Here's how he sees UFC featherweight champion Jose Aldo's two top challenges right now:

"In The Fray" Contenders

The next man chosen to have a crack at knocking Aldo off the top perch. Koch is an exciting prospect that trains alongside former and current champions such as Anthony Pettis and Ben Askren. The sole loss on his record comes against Chad Mendes, but that's not too disparaging considering that Mendes has managed to outwrestle everyone he has fought, barring Aldo. However, his last fight against Brookins didn't really show his capabilities as the TUF Champion gave him a harder fight than many expected. Based on that performance, many believe that the odds are heavily stacked against him when he fights for the Featherweight title at UFC 149, but one should look beyond his last fight to see that he brings new challenges for the current champion with his height, range and creative striking.

Against Aldo, perhaps it's a case of "too much, too soon". But regardless of whether he wins or loses, Koch looks to be a name amongst the Featherweights for some time too come.

The UFC's Japanese import was regarded at the time as being one of the few 'credible' challenges to Aldo's reign. Unfortunately, a lackluster debut against George Roop quelled the fire, only for a spark to reignite in his decision win against the game Bart Palaszewski. Although it was rumored that he had a chance to fight Aldo, he turned the opportunity down in favour of having one more fight against Ricardo Lamas.

This puts him in a risky position: although Lamas has looked like a reborn fighter in the ranks of the UFC's featherweight division, he still lacks name value. Hioki risks losing more if he lost than he would gain if he won. However, if he did win (and he should), expect him to be offered either an immediate title shot against the Aldo/Koch winner, or to face the loser of Zombie/Poirier in another title eliminator.