It can't be a coincidence that on the eve of the heavyweight weekend, the most notorious of all weight enthusiasts added another notch to his belt. For Anthony Johnson, what was supposed to be the first legitimate step at middleweight, fell back to the accommodating embrace of rumbleweight at the last second. If Johnson is looking to mount a crusade to get back into the UFC, this was probably not the greatest way to start.

Though at least it gives us a good segue for all the upcoming heavyweight brutality. While everyone's excited about the potential for UFC 146 to be the shortest main card in history, the sneakier story of the weekend is the fact that the prelims could probably serve as their own UFC on FUEL show.

Not half bad. I've said it before and I'll say it again, it's a good time to be a fight fan.

Anthony Johnson fight moved to catchweight. Exiled UFC veteran Anthony Johnson's middleweight fight against Dave Branch at Titan Fighting 22 was shifted to a 195-pound catchweight bout, with Branch weighing 189.2 pounds and Johnson tipping the scales at 194.2 pounds. "Rumble" claimed he did not miss weight, although the fight was originally signed and marketed as a middleweight bout, as both Branch and Johnson confirmed in recent video interviews.

It's flying under the radar, but Mayhem Miller will probably be fighting for his livelihood on Saturday's undercard. And don't think he doesn't know that.

We're not saying it's going to happen, but seriously guys, what happens to the heavyweight division if Frank Mir does something like this to JDS? (Click to see someone get put to sleep.) 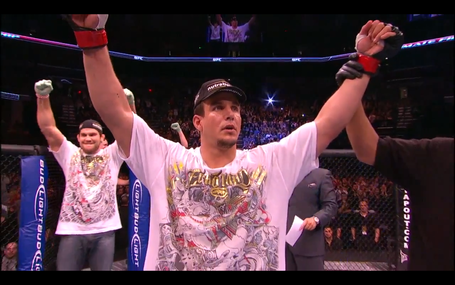 Dave Herman couldn't be boring even if he tried.

@cypharMMA um so? Just cuz it wasn't announced doesn't mean anything. Doesn't mean it has to be announced either. ... tmi.me/qwzvq

@cypharMMA I weighed in with shorts on that's why lol

@MiniKitson lol several ppl can say what they want. Doesn't mean shit to me. David didn't say it he was just Rt ... tmi.me/qwMVb

@cypharMMA thinking about it honestly.

I'm going to do my last training before the fight now.We are almost there I hope you guys are as excited like as I am for this fight

Today's Fanpost of the Day is another encyclopedic timesink by Sweet Scientist: MMA's Cousins: Other Forms of Martial Arts Mixing Striking and Grappling

After fanposts on the different styles of kickboxing and on "traditional" striking arts, this fanpost will conclude this little series of post and will focus on forms of martial art mixing striking with grappling.

Kudo Daido Juku was created in 1981 by Kyokushin Karate and Judo black belt Takashi Azuma. K-1 great Semmy Schilt was a two time champion in Kudo and Minoki Ichihara fought at UFC 2 and lost to Royce Gracie which prompted Azuma to study BJJ and incorporate BJJ techniques to Kudo. Kudo also held events called WARS where Kudo fighters would take on fighters from other styles under the other style rules.

Rules: One interesting thing to note is that there is no "weight" classes in Kudo but "physical index" classes, one's physical index being calculated by adding his height in centimeters to his weight in kilograms. Thus, a fighter who's 180 cm tall and weights 70 kg has a physical index of 250, same as a fighter 170 cm tall and weighting 80 kg. Physical index classes are -230, -240, -250, -260, -270, +270 and absolute.
one three minutes round with possibility of 2 extra rounds. Punches, kicks, elbows, knees and headbutts allowed standing, clinching allowed for 10 seconds and ground fighting allowed for 30 seconds twice in every round, ground and pound allowed to the body, forbidden to the head for the fighter on top, but simulated ground and pound brings points. In the absolute class if there is a physical index difference of more than 20, groin strikes are allowed for the smaller man. Victory is possible by KO, submission, or judges decision.