Yesterday was an odd day for those that apply to the general school of fairness. On one hand, we had Nick Diaz, the popular but polarizing Californian who was set to meet with the Nevada State Athletic Commission (NSAC) to determine his punishment for smoking prescription weed prior to his UFC 143 title fight against Carlos Condit.

Then, on the other hand, we had Chael Sonnen, the popular but polarizing Oregonian who was set to meet with the NSAC to determine whether he'd be allowed to artificially elevate his testosterone levels prior to his UFC 148 title fight against Anderson Silva.

Well, you can guess how it all went down. In a unanimous vote, Diaz got suspended for a year, docked $60,000 of his purse, and made a public example of by the commission. The very same commission who, just hours before, had unanimously voted to grant Sonnen a therapeutic-use exemption (TUE) for the use of synthetic testosterone, and less than a month prior, only handed down a minimal nine-month sentence to Alistair Overeem for pumping his system to Herculean levels.

Again, let's repeat. Diaz got a legal flogging for using a substance that -- regardless of whatever propaganda or rhetoric you subscribe to -- is in no way, shape, or form performance enhancing, directly after the commission gave Sonnen the go-ahead to take bi-weekly injections of a blatantly performance enhancing substance, all the while praising him for his honesty. Now, I don't claim to be an expert on TUE, and I'm not directly opposed to its merits either, but doesn't something about that logic seem a little silly?

Nick Diaz suspended for one year. UFC welterweight Nick Diaz received a one-year suspension from the Nevada State Athletic Commission stemming from his positive post-UFC 143 drug test. Diaz, who will also forfeit 30-percent of his $200,000 fight purse, and his legal team are strongly considering challenging the NSAC's ruling.

Chael Sonnen granted TUE. Polarizing UFC middleweight contender Chael Sonnen was granted a therapeutic-use exemption for the use of testosterone in advance of his UFC 148 title fight against Anderson Silva.

Police report from Jon Jones' prior run-in with law. In the midst of Jon Jones' current legal troubles, it has been revealed that the young UFC champ had a prior, unreported run-in with police on November 24, 2011 after being pulled over in Albuquerque, NM, for losing traction of his vehicle and driving with a suspended license.

The Reem really is the most well done documentary series in MMA right now, and the latest episode is no exception. This time we get a behind-the-scenes look at Overeem's life just as everything falls apart. Check it out and you just might feel a tinge of sympathy for the massive Dutchman. (Click the image to watch.) 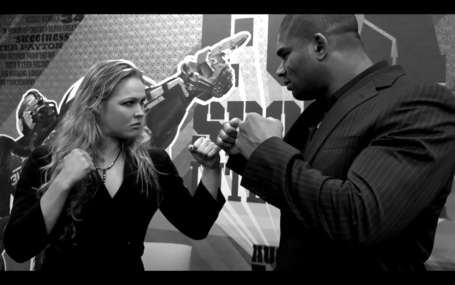 Is that Steven Seagal in a Brazilian Budweiser ad with Anderson Silva? Why, yes it is.

So Bob Sapp fought at last weekend's CFC 21 in Australia, but you could guess the result of that, so we don't need to show it to you. Instead, check out flyweight Shabe Kafo evoking his inner Korean Zombie and finishing Kian Pham with this sick twister submission. (HT: Bloody Elbow)

Who needs a fancy TV when you can just catch the second episode of UFC 146 Primetime: Dos Santos vs. Mir right here with us?

Bizarre RT @Dutch_RDS: @VictorConte what's your thoughts on Sonnen getting a TUE for ufc 148

In my opinion Sonnen is a fraud & Kizer is a puppet for UFC. NSAC needs investigation RT @Geo_youngson: @VictorConte @dutch_rds why bizarre?

"@may_joey: @RenzoGracieBJJ What is the pref religion in Brazil? R u a religious man?" My religion is JiuJitsu, my country is catholic ;-)

WE CAN ONLY HOPE

I've decided my taxi driver to airport was an a-hole. I hope he reads this

This post has nothing to do with Jon Jones's DWI.

For years the Light-heavyweight division has been the showcase division for UFC. All the biggest names, Tito, Chuck, Randy, Rampage, Shogun, and now Jon Jones have been stars while ruling LHW. But when I look closely at the division, I see a division that is facing a pending crisis despite having a dynamic young champion who will likely rule the division for years to come. The UFC Light-Heavyweight division currently has 30 Fighters - Less than every weight class except Flyweight, and Heavyweight(Unless you count Cormier, and Barnett on the UFC roster, then there are 31 HWs).

The UFC website list 36 fighters, but they list Chuck, Randy, Hamill (all retired), Luis Cane, and Caio Magalhaes (both have their next fight at MW), and Aaron Rosa (Next fight outside of UFC in June).

What we see when we look closer is an aging weight class with very few high end prospects moving up the division.

Two have announced that their next fight will be their last (Tito, Rampage)

Three others are over the age of 40 (Hendo, Matyushenko, Perosh)