We're almost there, folks. The formal, on-site coverage for UFC on Fox 3 kicks off today. I know yesterday I wondered aloud why there were no Dana White video blogs and it turns out I just wasn't paying close enough attention. There's not only one, but two and we've got them both included in today's round-up.

One of the more interesting storylines as we approach the UFC's third show on Fox is just how much Josh Koscheck believes he's going through of a technical renaissance now that he's left American Kickboxing Academy. Koscheck has a new boxing coach who is suggesting that the former welterweight top contender will be able to easily exploit the technical deficiencies in Johny Hendricks' game.

It's a gutsy statement, but it's one only made possible by Koscheck admitting that up until getting this coach, he never knew basic mechanics: how to throw a jab, slip a jab and more. I don't know if that's true, but I also don't know why he'd say it if it weren't. For a fighter to admit that publicly is a rare moment of candor, folks.

The Case for Public Fighter Pay. Our own Mike Chiappetta tries to lay out the case for why the pay fighters make should be a matter of public record.

Shannon Knapp Says UFC Very Supportive. The brains behind Invicta FC told Bloody Elbow that the brass at UFC have been complete supportive of her promotional efforts.

Ross Pearson Arrested on Suspicion of DUI. The British striker allegedly had a bit too much to drink and then decided to get behind the wheel of a car.

Josh Barnett, Daniel Cormier Hold Media Scrum. Just one day before UFC 145 in Atlanta, the two Strikeforce grand prix finalists spoke to the media on a huge range of issues.

I said there was no UFC on Fox 3 Dana White video blog yesterday. I was wrong. Here's episode 1:

Remember the story of Chael Sonnen getting tricked with the shock pen while he was in Brazil? There's video of it:

Apparently, a 53-year old man was able to get into a MMA cage and fight someone 21-years old on less than an hour's notice. This according to Stephan Bonnar. So, I guess that's that when it comes to regulation:

Sometimes I like to go to the grocery, and do all my shopping out of other people's carts when they're not looking

HOW RANDOM IS RANDOM?

If u ask for a random drug test, isn't really random then?

Guess what? I still haven't got my bag from #delta @deltaassist.Almost 2 weeks now since they lost my bag. any ideas as to what should I do?

In order to create, you must destroy.

Im going with Miller 4 this weekends @ufc. I'm calling it a three round decision -Miller. I think he is a bit more talented then Diaz. 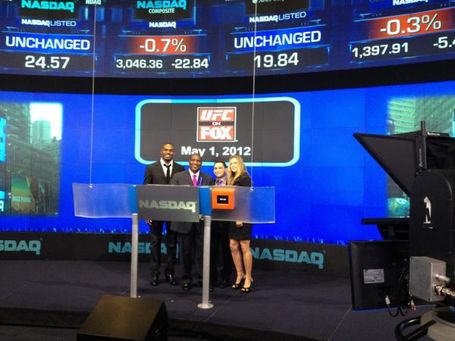 Look who is ringing the opening bell at the NASDAQ stock market opening bell. Oh, no big deal. Just a few UFC fighters and a Strikeforce champion. That's all.

Today's Fanpost of the Day comes courtesy krste and they want to know if UFC bantamweight Dominick Cruz's footwork and striking is so bad, how come no one is able to really hit him?

Many detractors of Dominick's style are coming from a Boxing background and claim that his technique is flawed and ineffective. Since my striking knowledge is limited at best my counter to that is that Dominic is not a Boxer, he is an MMA fighter, so what works in boxing might not work in MMA if translated directly. To me, his head and feet movement are a thing of beauty, the way he attacks from angles and evades incoming attacks with his hands down, swaying and slipping like some sort of a zombie cobra reminds me of my younger days when me and my dad used to watch our favorite boxer, Naseem Hamed, although the zombie quality is uniquely attached to Dominick's movement.

To get back to my original point, if the striking of the current bantamweight champion is so flawed why hasn't anyone exploited those flaws yet, why does he still have the belt? My question is not intended to sound sarcastic, i am merely curious since i lack the knowledge of the striking game to conclude for myself whether Dominick is Mayhem-esque in his striking game or Spider like.