Let's get this out of the way now. Cesar Gracie released an official response to the whole Nick Diaz no-showing the World Jiu-Jitsu Expo situation, and it's definitely... something.

But hey guys, pay attention real quick. Are you ready for this? I'm going to blow your mind.

(I get it, most of you already knew that. But I'm willing to bet there's at least one guy out there who just got his mind blown. So for that guy, you're welcome.)

Obviously the whole Diaz soap opera continues to roll on, but I can't be the only one who just wants to tune out the noise and watch some actual, real-life fighting. Remember the last time there were mid-week fights, and how they proved to be a nice little slice of violence to relieve the weekday monotony?

Even if tonight's UFC on FUEL 3 card isn't the most star-studded, you and I both know that likely means we're about to see nothing but brawls. And besides, personally, I'm ultra-curious to see if Chan Sung Jung has really turned a corner or if Dustin Poirier is actually the can't-miss prospect we all think he could be. And how can Donald Cerrone possibly recover after having his soul snatched by Nate Diaz? I demand answers.

Cesar Gracie responds. Cesar Gracie issued an official response to the bizarre Nick Diaz situation, explaining that Diaz abandoned his match with Braulio Estima because of a series of perceived slights which accumulated to make him feel like "he was at a circus."

So Dana White wasn't happy with the pessimistic coverage of the UFC on FOX 3 ratings, and he released a 4 1/2 minute video blog to tell you.

Donald Cerrone might want to be wary of getting too comfortable tonight, because Jeremy Stephens has a history of doing violent things when he's down two rounds to zero.

Wanderlei Silva is forced into dog-duty for his latest video blog, so he carries the little pup to the beach and launches into a surprisingly poetic speech about how much of a jerk Vitor Belfort is being on TUF Brazil.

Prepare to see one of the worst leg breaks you've ever seen in your life: 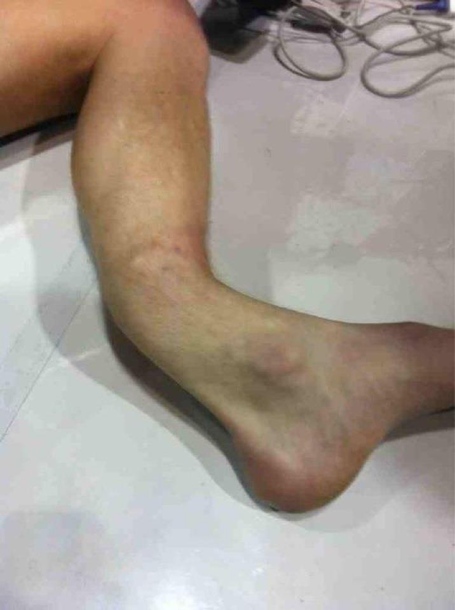 Will be posted at 10:30pm PST. Ross Goodman (attorney) asked to review it before posting. Thinks I am too forthcoming for own good

@evan1evan next time!? Dude, what planet do you live on? It's been my problem for over a year. Do u not watch the UFC or follow MMA?

Want to thank my family,friends and supporters!! Thank you guys so much for everything. Tomorrow I will fight with my heart. Thank you

Good to see the other Lakers respond to Kobe's demand they step up their game. The playoffs aren't like raping someone. He can't do it alone

Today's Fanpost of the Day is a thorough recap of Josh Barnett's rocky relationship with the UFC: The Sketchy Past Of Josh Barnett Leaves His Future In Question

In one of the most anticipated Heavyweight bouts of the last year, Josh Barnett is set to face-off against former Olympian Daniel Cormier on May 19th at the Strikeforce Heavyweight Grand Prix Finals. Daniel has been a highly touted and impressive prospect since he was signed by Strikeforce. After racking up 7 wins and remaining undefeated, Cormier was tapped as an alternate for the Grand Prix. When Alistair Overeem was dropped from the organization, Daniel got the call to fill his spot against Antonio Silva. In the biggest test of his MMA career thus far, Cormier impressed with a TKO victory and earned his spot in the finals. There's no doubt that win or lose he's looking at an exciting future with the UFC.

The picture is not so clear for veteran fighter Josh Barnett, however. At a glance, the choice seems easy. He's an uncontested top 10 fighter. He's charismatic. He's widely recognized as being a part of some of the best fights in the sports history in his battles against Antonio Rodrigo Nogueira. And he breezed through the first two rounds of the tournament without a scratch. Easy call, right? Not so fast. There's a reason Barnett is one of the most infamous fighter's in MMA's short history. Namely, PED's.

Barnett started strong, rattling off 10 consecutive victories before losing to former UFC champion Pedro Rizzo at UFC 30. He recovered well, though, and finished his next two fights earning himself a shot at the title against Randy Couture. Josh scored the TKO victory late in the second to win the Heavyweight title, but his triumph would be very short-lived. Barnett tested positive for three different banned substances and was kicked out of the promotion by UFC president Dana White (Note: Mike Sloan of Sherdog has reported that Barnett also failed at UFC 34, but was not punished. I was unable to find any other confirmation of this report). Barnett was sentenced with a six month suspension and forced to find somewhere else to compete.

This failed test would be a turning point in Barnett's career.