To the best of my knowledge, there's no word in the English language to describe being ‘mildly surprised' and ‘completely not surprised' at the same time. But you can bet, if there was, you'd be reading it right now.

I won't insult your intelligence with a lengthy recap because by now you already know the story, but Nick Diaz was supposed to show up to fight Braulio Estima at the World Jiu-Jitsu Expo for charity on Saturday night, and, well, Nick Diaz didn't show up.

I don't how we got to this point, but somehow, after years of flaky behavior and childish antics, an exhibition grappling match just served as the tipping point for Diaz's cult-like presence. If only because this latest figurative middle finger is impossible to defend.

Skipping the press conferences, the f*** your mother non-apologies, those are one thing. After all, it's the actual fights that matter, and Diaz would never skip out on a fight. Or at least that's what we all said. But now he has, and even the most dedicated Diaz fans don't really have an excuse. Estima didn't make weight? See, that's wrong. Cesar Gracie said so himself. So really, all this noise is irrelevant. What it comes down to is this. Braulio Estima was at the World Jiu-Jitsu Expo. Nick Diaz was not. Everyone who paid $9.95 got screwed.

But I'll save the outrage for others, because right now it's flying from every direction. To me, the more interesting angle is finding out what happens from here.

Like it or not, this bizarre weekend only adds to the intrigue of Diaz. Following the man is like rolling on a late-night roulette heater. Red or black, odd or even, everybody's jumping around the board hoping normalcy wins out. But after the house hits the zeros enough times, and everybody wises up to the game, what's the fallout? Does the UFC become more wary of a Diaz-headlined pay-per-view? Is this the last time we'll all get burned or just another set-up for tomorrow's disappointment? Because if we're being honest, you'll still pay to see his next fight and so will I. Maybe that's part of the problem, but it probably isn't changing anytime soon.

Nick Diaz no-shows World BJJ Expo. Retired UFC welterweight Nick Diaz no-showed the World Jiu-Jitsu Expo, leaving a furious Braulio Estima to stew about the failed charity superfight. Diaz's trainer, Cesar Gracie, was unsure about the reasoning for Diaz's absence, though is it possible we only have ourselves to blame?

Weekend MMA results. Catch up on the rest of the weekend with fight results for TUF Live, Bellator 68 and the World Jiu-Jitsu Expo, plus an exclusive BJJ photo gallery and complete video highlights for Kyra Gracie vs. Alexis Davis, Kimbo Slice vs. Jesse Porter and the pitiful display that was Bob Sapp vs. Mariusz Pudzianowski.

UFC on FUEL 3 dissections. Preview tomorrow's UFC on FUEL 3 action with comprehensive breakdowns of the preliminary card and Fabio Maldonado vs. Igor Pokrajac.

It was easy to forget, but the inaugural episode of UFC Primetime: Dos Santos vs. Mir aired late on Friday night. We're always looking out for you, so here's the replay in case you missed it the first time around.

Usually not a whole lot happens in a 36-second fight. But this blistering Jesus Martinez vs. Aung La Nsang clip from Bellator 68 has to be the exception. (Props to @BeauLaFave for the find.)

Dustin Poirier has something special waiting for him after fight night.

The headlining attraction of KSW 19 may have been a total farce, but the co-main event turned out to be the perfect showcase for one of the last great non-UFC middleweights. Seriously, check out the finish on this one. (HT: Bloody Elbow)

Let's be honest here -- Nick Diaz is a masterful troll. Evidence No. 1: While Braulio Estima was busy lambasting Diaz at the Expo, Diaz was (presumably) giggling away and 'liking' the video on YouTube. (At least now we know he's a fan of MMAFighting.com.)

In other news, Rory MacDonald's black eye looks straight out of 28 Days Later. 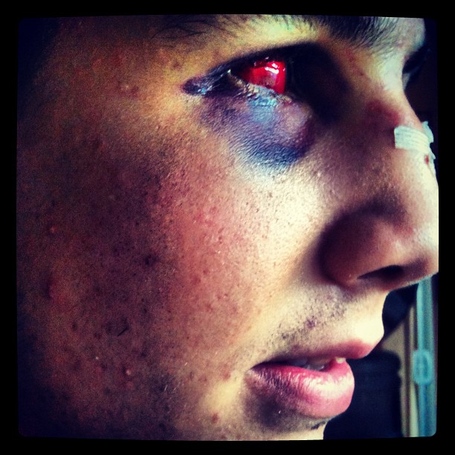 @nickdiaz209 why do u keep self destructing your career? We want to love your swagger but you make it so hard!

If they make a Where's Waldo movie, Nick Diaz has to be Waldo

Still can't take the Nick Diaz fan outta me. Just hope he gets past whatever mental or emotional issue it is that leads to this behavior.

@nickdiaz209 the truth can only be told by him. For sure he has his reasons. He represents BJJ better than anyone in the fray. Let's wait

Unfortunately the so expectedsuper fight Estima vs Diaz didn't happened.I'm very sad as I did everything possib... tl.gd/hd231s

Will have a full statement tomorrow on graciefighter.com. Today is Mother's day. Happy Mother's Day!

Okay ... Couldn't help tweeting this cause it felt too damn good sending this message to not share it instagr.am/p/KeSmDfBEQH/

JUST A CONVERSATION BETWEEN FRIENDS

@ForrestGriffin don't try to confuse me with your word riddles. People with Elvish names are always trying to confuse us human folk.

@ForrestGriffin also started grappling to cauliflower his ears because I told him that pregnant women don't find pointed ears attractive.

Today's Fanpost of the Day takes a break from the Diaz noise to look at the upcoming return of K-1, courtesy of Brent Ducharme: Five Things To Know About The K-1 MAX 2012 Final 16

When they first met in the K-1 MAX 2010 tournament's round of sixteen, Zambidis and el Hadj engaged in a high-paced, back and forth affair that many kickboxing observers consider a classic. Their bout went to an extension round (which seemed to be grounded more in an understanding of potential entertainment value than actual merit), and both were put on the canvas in the course of the bout.

As these two fighters prepare to meet in the round of sixteen once again, their established identities provide the sense that another memorable battle may be in store. Mike Zambidis has posted a 3-2 record in his last five fights (just as he had prior to the 2010 tournament) and there are questions regarding how long the heavy-handed Greek fighter can remain on the biggest stage in kickboxing. As for Chahid Oulad el Hadj, he is the same banger that Zambidis planted overhand rights on nearly two years ago. The 23-year-old has been outclassed by many top kickboxers in the world today, but remains committed to an all-action style that is fan friendly if not the most likely to help build a sustainable career.

What's more, Mike Zambidis always has interesting bouts in the K-1 MAX round of sixteen. In 2005, he obliterated Norifumi 'Kid' Yamamoto with a right hand that is well worth the look. The next year, Zambidis battled with lanky Japanese standout Yoshihiro Sato. 2007 saw him defeat Gago Drago by decision following an extension round. Zambidis was on the wrong side of a knockout in the extension round when he met Andy Souwer in the round of sixteen in 2008.