It's fight week, right? Doesn't that mean we ordinarily see Dana White video blogs or even Tweets from White that say the words 'fight week' only in stretched out form? Maybe I missed it, but I've yet to see it. I have to say, I might be missing a lot. This weekend's card stands to offer some pretty great scraps, but there isn't a ton of interest for it. The card lacks star power, is competing with NBA and NHL playoffs and doesn't really leverage Cinco de Mayo with popular or revered Latino figures.

Still, the fights are likely going to rock. Another fight that's probably going to rock? Dan Henderson vs. Jon Jones. I know many in the MMA community were hoping for a July fight, but it just looks like the timing is too tight. Jones just isn't interested in that sort of turnaround and who can blame him? The guy already did it in 2011 and while it worked out well, better to get rest when you can.

There's no rest for the Morning Report, though. We've got UFC on Fox 3 and Hendo vs. Jones news covered in today's post. We've also got video of a really bad MMA debut, one of the best boxing photos ever and so much more. Jump on in. The water's nice and warm.

Nevada rebuts Nick Diaz's lawsuit. It should be noted the state of Nevada's Attorney General responded before Diaz filed suit, but it's worth catching up on the state's argument just the same.

Jones vs. Henderson likely for August or September. Not July as some had hoped it would make the UFC's debut in Calgary. But you know the saying: good things come to those who wait.

Jim Miller talks to MMA Mania. Read what the UFC on Fox 3 headliner has to say about his bout this Saturday with Nate Diaz.

Clay Guida comments on Alistair Overeem's testosterone levels. And says the UFC heavyweight's coaches also deserve some the blame for the situation he is in.

Johny Hendricks trains. He and his team also visit his local children's hospital:

This might be one the best boxing photos ever, right? 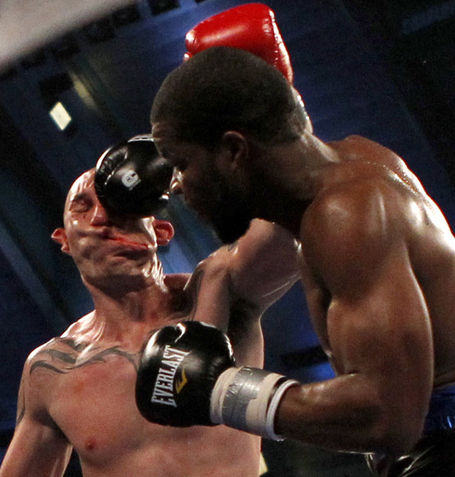 HAS RENZO EVER FROWNED?

Called my old man. He asks me.. Are you a happy man my son? the happiest in the world I answer. He says. So I am a happy man. Got love him

I was thinking about how much of a dirty slut @Bartimus7 was. I dont have any grounds to say that. But it sounds good. Lol #ShotsFired

And finally, it has come to this. A 35-year-old former prodigy now facing a 38-year-old former UFC fighter who hasn't been relevant in nine years since he beat Ricco Rodriguez at UFC 45. A battle in which nobody can honestly say they are remotely invested in as a fan. Fedor has agreed to fight Pedro Rizzo for reasons nobody can quite understand or care about, other than the fact it will presumably enable both men to pad their bank accounts.

All fans are left with from Fedor is the sort of sad, hypothetical arguments about what might have been if he didn't have the management he has, if he had decided to face the premier competition in the UFC, if he had been less ambivalent about his MMA career. It is almost a remorse-by-proxy, the same sort of feeling one gets when one watches a movie about unrealized potential and failure. It's just... sad.

We could blame M-1 and Vadim. We could blame the UFC. We could blame fans for not appreciating what he gave us in Pride. But really the only person who deserves any blame is Fedor himself. He has reaped what he has sown. He has become what he wanted to be. In the end, he is to blame for our inability to sympathize with him, for he has refused to share with us his own disappointments, his own fears and hopes and dreams. He has shut us all out for his entire career, and so it is only fitting we do the same now.