That's why this is so ridiculous. Alistair Overeem knew exactly when he was going to be tested. When you miss a commission ordered pre-fight test, then ignore the commission and submit an invalid blood test to your personal doctor in a different country, and somehow come out smelling like roses with the only caveat being, "two random drug tests in the next six months," how does that go wrong? It's baffling.

There's still a process here, and there's still an outside chance of a testing mistake, so holster the pitchforks for now. But seriously? Doing the same thing over and over again and expecting different results; there's a word for that.

Frank Mir would be 'excited' to replace Alistair Overeem. Former UFC heavyweight champion Frank Mir offered his services in the event that Alistair Overeem is forced to withdraw from his title bout against Junior dos Santos at UFC 146.

The MMA (after) hour. Muhammed "King Mo" Lawal spoke about reaching out to the Nevada State Athletic Commission's Pat Lundvall to apologize, his current relationship with Zuffa, the offers he has received from other organizations, whether he will go to WWE, and when he expects to fight again.

Just watch this and think about how crazy Overeem vs. dos Santos would have been.

So a lot of you out there probably think you're huge Nick Diaz fans. Well, how does it feel to know that no matter what, you're never going to be a bigger Nick Diaz fan than this guy? (HT: Middle Easy)

How to describe this video? Let's see, Tim Kennedy frolics around in a Katy Perry wig while belting out "Part of Me." Then he tearfully cuts off his hair and dances out his worries in a field of flowers. Yup, actually that sounds about right. 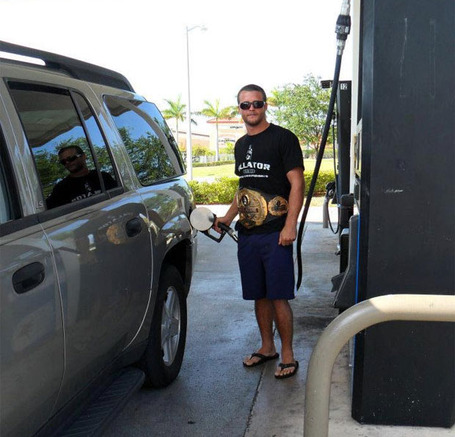 yea! just found via internet that I PASSED MY DRUG TEST! It was close but I passed. #Nodoubts @ufc @danawhite

I'm shocked.. Has the body fat of a tooth brush, looks like the guy on STREETFIGHTER. My mind is blown, just blown.

"It wasn't me, it was the horses, I swear!" - Alistair Overeem

Commissioner Lundvall, thank you for accepting my apology. After talking on the phone with her...i seen that she is really coo as hell!!!

Are you still determined to use Thai fighters and to try and negotiate TV deals in Thailand even if you are not able to hold live events here?

The sport of MMA will grow in Thailand whether DARE holds events here or not. There is so much happening right now around Thailand that it is inevitable that the sport will grow to become a mainstream sport. We will definitely continue to use the same roster of fighters and to entertain our audiences, both live and online as well as through new TV co-operations expand our reach by providing new viewers the unique DARE experience.

Where the actual live events will be held does not, in my opinion, make a significant difference as long as we keep on delivering our product and improving it.

Do you agree with the argument that MMA could somehow adversely affect the image of Muay Thai?

We respect whatever decisions are made by the officials, even if we don't always agree with them and we respect the Muay Thai heritage in Thailand and agree that it needs to be protected. At the same time we also feel that MMA has done a lot of good things for Muay Thai, both internationally as well as In Thailand.

For example, many of our fighters in DARE don't have a Muay Thai background but are experts in Judo or Jiu Jitsu and now as they are becoming professional mixed marital artists they have started actively to training in Muay Thai. This is in our opinion a win win situation where both sports are supporting each other.