I could've sworn the UFC Spring Break was over, but here we were again with a weekend where no UFC or Strikeforce event was being held. That doesn't mean there was no MMA action. There was. In fact, there was pretty good MMA action courtesy the all-women's card for Invicta FC's inaugural event. Some of the fights early on the card were fairly lackluster, but towards the main event things heated up nicely. Jessica Penne stood out with a strong performance, Young vs. Smith was tons o' fun, Randi Miller proved she's pretty green but pretty mean and Marloes Coenen put Ronda Rousey on notice.

There's also a UFC event this coming weekend. More specifically, a free UFC event, which are in many ways the best kind. I've long felt this event was booked as something more than a FX card, but less than one for pay-per-view. I'm not sure that's the optimal balance, but it's the one we got and there are strong, important fights to be enjoyed.

For now, though, let's catch up on the results you may have missed, the odd interview of UFC welterweight Georges St. Pierre on CNN, Tim Kennedy being Tim Kennedy and much more.

Coenen Victorious at Invicta FC, Calls Out Ronda Rousey. The biggest fights of the weekend took place on an all-women's fight card. Catch up on what happened and what could be next.

Dana White Says UFC Will Not Put On Shows in California If CSAC Bill Passes. The UFC's head honcho says if a controversial law is passed, that could be the end of the UFC in the Golden State.

Fedor Emelianenko talks Pedro Rizzo. What does the greatest heavyweight of all time think about Pedro Rizzo and M-1? Click to find out.

Luke Rockhold Readies for Tim Kennedy, Wants to Fight Anderson Silva. The Strikeforce middleweight champion speaks to our own Mike Chiappetta about what's next in his career.

Georges St. Pierre talks about being bullied on CNN. Oh, and also answers the worst questions ever:

The Nick Diaz story is well known. Ahead of UFC on Fox 3, it's time for Nate's story to be told (HT: MMA Mania):

UFC Octagon girl Arianny Celeste poses for FHM in the Philippines. You can tell it's Filipino with words like "Bhoy" and "Tayo" on the left side of the cover (HT: ABS-CBN News). 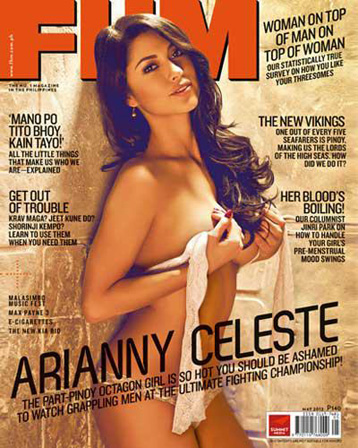 Ugh, every morning I have to eat a handful of fresh parsley... And every morning green projectile vomit is a distinct possibility...

Thank you loved the first edition @InvictaFights@shanknapp I felt at home. I was very happy indeed now the wmma is being valued.

BRIAN STANN AT A LOSS FOR WORDS

Today's Fanpost of the Day comes courtesy Luke Nelson who forecasts how UFC welterweight Rory MacDonald would fare in fights against the division's top eleven contenders. Here's his sense of MacDonald vs. Nick Diaz:

Strengths: Boxing, Offensive Guard, Cardio, Aggression, Toughness. Some people don't really consider Nick to be a boxer, as he tends to just crowd his opponent against the cage and unleash flurry after flurry, something that looks like boxing but doesn't incorporate the nuanced movement that a true practitioner of the sweet science would have. Either way, he's beaten a bunch of noted strikers with that strategy, so whatever you call it, he's good at it. He has one of the most dangerous guards in the division, although he hasn't used it too much recently, preferring to keep fights standing. He never gets tired, can take a helluva shot and his gameness is pretty much unquestioned.

Weaknesses: Strength, Wrestling, Fight IQ. In his first stint with the UFC, Diaz had a tough time keeping his fights standing, although he has said on multiple occasions that he would not have taken the bottom and played from his guard so readily if he had known the judges would treat the top guy as having the advantage, despite it being something he probably should have been aware of. In his fights since, no one has succeeded in taking him down and keeping him there but he also hasn't fought a vaunted take down and top control fighter of the calibre found in the upper echelon of the UFC`s welterweight division. He admits to not being as strong as his peers, but he also doesn't want to be, preferring to rely on his superior cardio and a volume striking approach to win his fights.

How a fight with Macdonald would look: Rory rag-dolled Nick`s younger brother Nathan en route to a three round decision in his biggest UFC victory to date. He landed three suplexes in the final round against Nathan, showcasing a decided strength advantage that he would also hold on Nick. Rory also out-struck Nathan for a good portion of their fight, but it wouldn't be a good idea to try to stand up with Nick, so this fight would likely come down to how much damage Rory could do from inside Nick's guard. It seems likely that this fight would go into the third round and if Rory ran out of gas in the same way he did against Condit that would spell trouble against Nick.