Crunching Numbers: Josh Koscheck and the Issue of Fighter Age

We often hear in MMA that a fighter could just be getting started or ready to make another title run even as they approach their mid-thirties. Relative to fans and media in other sports, the MMA community seems to believe aging is deleterious for a fighter's career and that a fighter at 35 is as dangerous if not more so than one at 25. Hey, they've got all that wisdom and experience, right?

In fairness, it's not like they haven't had reason to think that. Randy Couture was defending titles in his forties. Current UFC middleweight champion Anderson Silva is 37 and still holds significant speed and reflex advantages over his much younger peers. These fighters, however, are clear outliers. Impressive, obviously, but hardly representative of the norm.

I bring up age because we are approaching an interesting case at UFC on FOX 3 next weekend. Specifically, UFC welterweight Josh Koscheck, who will be 35 years old in November, is facing Johny Hendricks, a 28 year-old rising contender. What does that tell us about his chances against Hendricks this Saturday? Does it really not matter how young a fighter is in terms of his chances for success in the Octagon as some in the MMA community would have you believe?

If the data on age and performance tells us anything, it's that getting older matters significantly and not in a good way.

Before we get to the numbers, we should be very hesitant to make any predictions about Koscheck vs. Hendricks if we're viewing it through a prism of age. Oddsmakers have the fight as basically a dead heat and I tend to think the longer the fight goes, the more it favors Koscheck. And statistically, that makes sense for an older fighter.

What do we know about age and how it affects performance in MMA? There are two key takeaways every MMA fan should know: younger fighters on average never win less than 50% of the time and older fighters are much more likely to lose by TKO/KO than by decision.

Some of the best research to date was actually done by two readers of the site Bloody Elbow in a FightMetric contest roughly one year ago. Using data compiled by FightMetric, they both discovered roughly the same thing, but arrived by taking two very different approaches.

There aren't a ton of surprises here, although it's worth reading the entire analyses done by the researcher to get a full grasp over what this all means. For our purposes today, though, we can confirm our earlier statement: younger fighters win more often (57% in this particular sample) and also hold statistical advantages in finishes albeit less so for decisions. More on that in a minute.

It's not enough, though, to just measure winning percentages in aggregate. What happens when we measure age differences between opponents? Do we see any trends? Yes, and the results are noteworthy:

The bottom numbers represent age difference in years. There's a number of ways to parse this data and, again, I implore you to read the original posts from where this data arrived to truly a get a sense for implications. Still, it's safe to say a couple of things. For starters, younger opposition have at least a 50% chance of winning at all times. The upward trend in the graph overall (with one lone exception) tells as age discrepancy matters. It's also intriguing that even in cases where both fighters are considered 'young' - say 22 and 23 years old - the younger of the two still holds a statistical advantage.

In the case I started this article off with - Josh Koscheck vs. Johny Hendricks - the age disparity is 6 years. Historically, the younger fighter in those circumstances has won 60% of the time.

Younger fighters tend to win more and sometimes by big margins, but it's when researchers factored in the method of victory things got really interesting. "Variation by type of victory depends on the age of the older fighter, not on the age of the younger fighter," the researchers said. "More precisely, we can say that as the older fighter’s age increases, his chance of getting knocked out increases substantially, his chance of getting submitted increases but somewhat less, but his chance of losing a decision stays relatively flat": 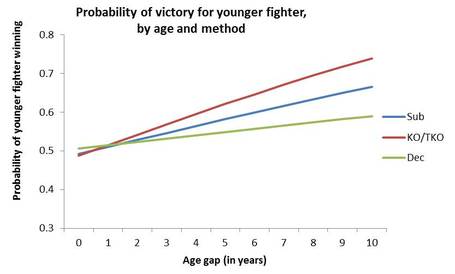 What does this graph mean beyond what's aforementioned? In some respects, it's hard to say and we should be careful about speculation in terms of what the data are specifically telling us. It's not as clear whether the effect above is from the advantage of youth or the liabilities of age. It's probably not the worst idea, though, to think the inability of older fighters to take punishment as well as they once did accounts for some of the uptick in KO/TKO finishes as they get older.

As for why older fighters are less likely to lose by decision, I'd personally suggest experience has to count for something. If the big shot doesn't put them out, they've got enough know-how to drag the fight late and give themselves a chance for victory.

All of this brings us back to Koscheck and his main event bout with Hendricks this coming Saturday at UFC on FOX 3. If it sounds like I'm discounting Koscheck's chances, I apologize in advance. I am not and have largely been a fan of his fighting style. He's fallen short against Georges St. Pierre, but has also had one hell of a successful athletic career. He is no one to overlook or take lightly.

But I also can't escape the numbers. I don't want to dwell on them too much, but I want to leave you with one final reminder about what the relationship of age and performance in MMA this time courtesy of Fight Matrix (who assembled their own data). What we have below is the winning percentage of fighters by age: 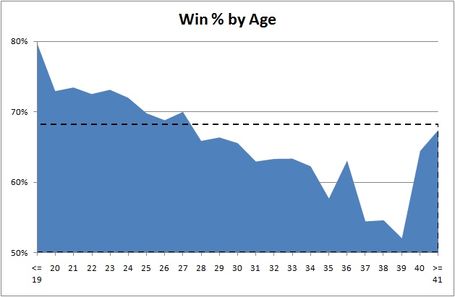 As a fighter gets older, it's true they accumulate helpful experience and knowledge. Unfortunately, however, the data also suggests it often becomes harder and harder to make effective use of it as they experience the fragility that come with aging.

The next time a MMA commentator, analyst or fan talks about a fighter's ability without regard to their age (or the age difference in an impending bout), temper their conclusions with this healthy dose of reality. These numbers do not tell us to discount the accomplishments and talent of older fighters, but they do give us license to ask how much longer fighters like Anderson Silva at 37 can really keep winning. That's especially true as they face younger and younger fighters.

The fact is this: mixed martial arts, like all other sports, is very much a young man's game. Age is not just a number.

All quantitative data provided by FightMetric except where otherwise noted.