Jon Jones handled his business on Saturday night. But you already know that, and you don't need me to rehash it.

For those keeping score, at just 24 years old, Jones has now polished off four of the greatest light heavyweights in world -- all of whom are former champions -- like he was playing a video game with the difficulty set to rookie.

After a run like that, a backlash was not only inevitable, it was already brewing. But while dominant champions are always polarizing in their own right, the ticky-tack dissection of Bones has started to zero-in on confusing reasons. His reach is unfair. He doesn't belong in this division. He should be fighting at heavyweight.

Now, I try not to judge, but diminishing someone's accomplishments because you don't agree with their choice of weight class is an odd gripe. There's a reason weight classes exist. If you can make the weight, it's fair game. No one piles on Anderson Silva or Georges St. Pierre for cutting upwards of 20 pounds. No one lays into Jose Aldo for being such a massive featherweight that he was nearly hospitalized on film.

Every athlete has their own set of physical gifts. It would be foolish not to use them. Besides, imposing your size and reach is a skill in and of itself. Being longer than everyone doesn't mean anything if you don't know what to do with it. Just ask Stefan Struve.

Hendo next for Jones. As expected, 41-year-old Dan Henderson is slated to challenge Jon Jones for the next defense of his UFC light heavyweight title.

White says BJ Penn will fight again. BJ Penn's career as an active fighter is not exactly over according to Dana White, who recently spoke to the 33-year-old former champ.

So Junior dos Santos released this clip right after the Mir-Overeem switch was confirmed. But honestly, the champ's super zoomed-in, totally taken out of context quote says it all: "It's a good thing for me."

Eddie Alvarez and Shinya Aoki have now met twice for a whopping grand total of 3:46 of fight time. Here's the messy 2:14 from Friday night. 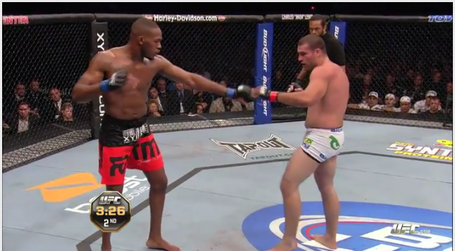 Just when you thought there haven't been any good post-fight melees lately, Maiquel Falcao and Andreas Spang go and do something like this.

TO THE VICTOR GOES THE SPOILS

It's only been one day and I'm already starting to miss the routine/grind. #Athletesproblems

I would think he would be the harder Puncher "@MIKEYBFILTHMMA: Should be asking what's Jon Jones power compared to Hendo's @JonnyBones"

Is anyone else starting to pay more attention to the people sitting cage side? #DoSomething

I know I've had a rough run lately but I wouldn't trade any of my fights for that performance. #ShowUpAndGetPaid

"@MisterKreger who are u talking about, these guys are champs, whereas you're a 0-4 gimmick. - Records are for DJ's, I come for a fight.

@Rampage4real damn! Why didn't you bring me on on a track? You know I spit that hot fire. And I also can rap.

Today's Fanpost of the Day is a divisive conversation starter, courtesy of BE's SSreporters: Jon Jones: An Apology

I don't write post-event recaps. Today is no different. I'm here to apologize on behalf of Jon Jones for his disgraceful actions last night. They were out-of-order, unpopular with the fans, and he should really be ashamed of what he did over the span of 25 minutes against Rashad Evans. Jones is too busy getting fans, so I will apologize not just for his fight, but the last 13 months or so. I'm addressing this to the MMA fans who hate Jon Jones for whatever reason.

I'm sorry Jon Jones was too boring for you in his comfortable win over Rashad Evans. I'm sorry that he put a dent in the side Rashad's forehead that resembled a 1997 Nissan Altima being on the wrong-end of a head-on collision with a Ford Excursion. It was a 5-round decision so lopsided that anti-Jones fans out of spite gave a maximum of two rounds to Rashad on the basis of a head kick in the 1st and a right hand in the 3rd. Two judges gave Rashad one round as ammunition for anti-Jones brigades to say "HEY! Rashad took a round off of him, maybe Phil Davis can take 3!". I'm absolutely certain that the entertainment value of the fight would've improved tenfold if Jon Jones simply lost the fight. And not just any loss, a loss where he looks like he just started fighting last week and Rashad would have his way with him. Evans would have landed a right hook from hell and Jones would've dropped like a bag of sand, all whilst looking limper than your p***s at the sight of an orgy in Central Park consisting of nothing but hobos and senior citizens who look like Estelle Getty. Jones didn't oblige, and I am truly sorry.

There was no correct outcome for Jones that involved him winning. The decision win was blasphemous, a quick first round stoppage would've been an anti-climactic end to a heated feud, and any form of a brutal KO or submission would undoubtedly raise questions about how evil Jon Jones is that he would willingly put his former bestest friend in the world to sleep.