Flash back to April 11, 2008. Jon Jones is a 20-year-old kid preparing for his professional debut at a sleepy show in Foxborough, Massachusetts. Forward three months and six profoundly violent finishes later, "Bones" is on the receiving end of a phone call to replace Tomasz Drwal against undefeated prospect Andre Gusmao two weeks out from UFC 87.

No matter how many times it's repeated, that timeline is absolutely absurd. Show me a kid out there that just picked up a basketball and could be talented enough to play for the Miami Heat in August. Go ahead, I'll wait. Bonus points if he's under the American legal drinking age.

So while Jones readies for the first defining moment of his young career tomorrow, it seems appropriate to look back at the lanky guy who ran roughshod over the entire northeast, playing the game he loved and emulating the men he saw on television. Knowing what we know now, flashes of what Jones would eventually become are all over this footage.

Also, his nickname used to be Sexual Chocolate.

UFC 145 open workouts. From Rashad Evans to Stephen "Wonderboy" Thompson, the MMA Fighting team was in Atlanta, talking to the top fighters on Saturday's UFC 145 fight card and checking out the open workouts.

Shinya Aoki out to prove Eddie Alvarez victory wasn't luck. DREAM lightweight champion Shinya Aoki is determined to prove luck had nothing to do with his 2008 victory over Eddie Alvarez in advance of their Bellator 66 rematch.

NSAC won't hear from Nick Diaz on April 24. The Nevada State Athletic Commission issued a statement refusing to hear Nick Diaz's case on April 24th until the existence of a medical marijuana card can be provided.

This is where it all started. Jonathan Dwight Jones, future UFC champion, enters the cage for the first time against Brad "The Barroom Brawler" Bernard to a quiet reception in Foxborough. He may be just 20 years old, but certain aspects of his fighting style are already unmistakable, both good and bad. (By the way, Bernard would never fight again. Though neither would we after this.)

Just seven days later, Jones is back in action against Carlos Eduardo. This would be Jones' longest pre-UFC fight, so it remains a fascinating retrospective of a kid still putting everything together. The flashy offense, the confidence bordering on cockiness, the staunch takedown defense, and the obvious Anderson Silva influences are all on display here.

Three more weeks pass and Jon has already picked up another win -- a 75-second guillotine finish over Anthony Pina. Now he meets Ryan Verrett, an unlucky man sporting a 1-3 record, at a cramped show in Connecticut. So if you're keeping track, Bones has been a professional fighter for almost four weeks, is already 3-0, and is about to earn the fastest knockout of his career. This kid's going places.

Another month goes by and Jones notches a 36-second win over Parker Porter, before meeting Moyses Gabin in his final fight on the regional scene. And it would be a fitting sendoff. After a surprisingly back-and-forth brawl, Jones exits the cage with the USKBA light heavyweight strap around his waist. Less than a month later, he's in Minneapolis for UFC 87.

Elsewhere, Anderson Silva posed for this picture and referred to himself as a metrosexual. 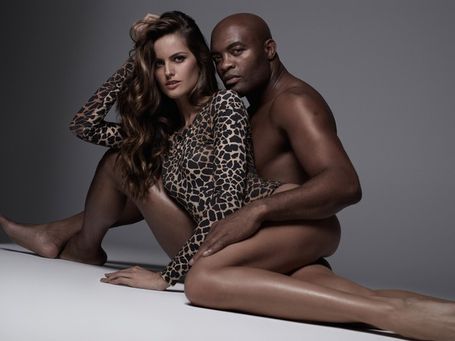 BRON'S ABOARD THE JONES WAGON

Hey I really appreciate having your support @KingJames. Striving for greatness. Keep inspiring.

@SUGARRAYLEONARD "thanks for the kind words..coming from you maybe I should fight again..you just made my day!"

I'm gonna make weight 2morrow but I don't know about my neck! Look at him doing interviews yesterday! Lol instagr.am/p/JnG_BWE1IX/

Today's Fanpost of the Day is a money-making main card preview by BE's jim-ma UFC 145: Looking For Upsets

Mark Hominick is an overwhelming favourite in this fight, having fought for the title just two fights ago, he has the ability to win with knockouts and submissions. In his fight with Jose Aldo he showed an ability to score grinding take downs too. He fights Eddie Yagin who is yet to score a win in the UFC. The only thing that points to an upset here is that in Hominick's last outing he was knocked out in seven seconds. That was as a result of coming in horrendously careless against Chan Sung Jung and I doubt he would make that mistake again. Yagin is no match for the Canadian on the feet and should not be able to take him down. There is always the chance of a big punch getting through or a submission opportunity being taken, but I doubt it will happen.

Mark Bocek is the big favourite in this contest at around 4-1. The Brazilian Ju Jutsu black belt has been in the UFC for ages and fought against some of its toughest fighters. John Alessio has been there too, having fought in the UFC and WEC between 2006 and 2008. Four years later, he has won 10 of his last 11 fights and finally gets the call to return to the UFC, as a replacement for the injured Matt Wiman. I suppose the odds are stacked in Bocek's favour because he has been fighting tougher opponents in recent years and has the ability to control where the fight happens. That being said, Alessio is a dangerous fighter both standing and on the mat and it is by no means a stretch that he might snatch a submission or a knockout. Bocek's the favourite, but there's plenty of chance of an upset here.