Morning Report: Brock Lesnar Hits the Rumor Mill, Canadian Politicians Punch Each Other in the Face

If you've ever found yourself craving the musty smell of middle age or telling people how Dramarama never got their due, the sensory overload must have been overwhelming after this latest throwback MMA weekend -- a three-day period that saw 50-year-old Maurice Smith kick Father Time right in the face, 41-year-old Pete Spratt backfist his way into a walkoff knockout, 45-year-old Murilo Bustamante and 37-year-old Dave Menne settle a score ten years in the making, and 38-year-old Paul Buentello fall to the most unfortunately nicknamed fella in The Ultimate Fighter history.

Add in victories from a slew of former UFC guys -- Karo Parisyan, Patrick Cote, Thales Leites, Gilbert Yvel and Drew Fickett -- and gorged fight fans everywhere broke into a cold sweat at the thought of shoveling down another bite. But then Bellator or TUF popped back on the screen and everybody sighed and said, why not, there's always room for a little more.

Weekend MMA results. Catch up on another weekend of furious MMA action with results for The Ultimate Fighter: Live, The Ultimate Fighter: Brazil, Bellator 63, ONE FC 3: War of the Lions, Amazon Forest Combat 2, WMMA 1 and RFA, plus grappling results for the IBJJF Pan Ams, and fight videos of David Rickels vs. Jordan Smith, Gilbert Yvel vs. Houston Alexander and 50-year-old Maurice Smith vs. Jorge Cordoba.

Video: riot breaks out at Lockdown MMA event. London's 'Lockdown MMA' show met a premature end after belligerent fight-crazed fans broke into a full-blown riot, throwing bottles and chairs at each other for several minutes.

Fedor Emelianenko rumored for October M-1/ONE FC card. M-1 Director of Operations Evgeni Kogan attended Saturday night's ONE FC 3 show as a special guest of CEO/Owner Victor Cui, fueling rumors that a cross-promoted card headlined by Fedor Emelianenko could be in the works.

Now here's an idea we can totally get behind: POLITICIAN FIGHTS. Sounds good, right? But that's not even the best part. You can gamble on them. Yes, in an bizarre awesome showing of depravity, bookies listed 37-year-old conservative senator Patrick Brazeau as a 3-to-1 favorite to bust up 40-year-old liberal parliament representative Justin Trudeau when the two Canadians brawled (for charity) on Saturday night in Ottawa. United States congress, start taking notes. (Thanks to @Gabe_Lewis for the tip.)

It's Monday morning, you're a responsible adult, you have things to do. Hey, we get it. But for all the slackers bored at work out there, do yourself a favor and check out Ole Laursen vs. Eduard Folayang's crazy 'Fight of the Year' candidate from ONE FC 3. (For the lazy, jump to 3:07:22. Or just spend the entire afternoon watching four hours of spectacular violence. We promise not to tell anyone.)

In a lot of ways, Rashad Evans gets a bad rap. The guy is showered with boos inside the cage, even though outside of it he's nothing but nice to fans and media alike. So big props to 'Shad for the restraint he showed after this dum-dum fan asked for an autographed "Rashadface" poster.

Another gem from the weekend: check out Patrick Cote making a pretty damn strong case for a UFC contract (plus Mario Yamasaki failing badly at his job) at Saturday's Amazon Forest Combat 2 event. (HT: Reddit)

Melvin Manhoef and DEEP champion Yoshiyuki Nakanishi were two minutes into what looked like to be an electrifying scrap at ONE FC 3, before an errant kick opened up a canyon-of-a-cut on Manhoef's right shin. Needless to say, this sucker ended in a 'no contest.' (Photo via Anton Tabuena/Bloody Elbow.) 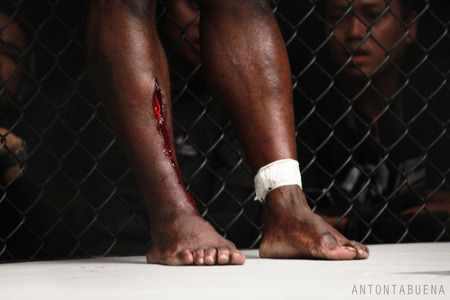 I DON'T LIKE IT WHEN MOM AND DAD FIGHT

. @smgathletes one day @evgenikogan said that if we ever got an UFC offer,he'd let me go. Now we know he's a lier piece of shit.

@evgenikogan You're pathetic. I wasn't the one jumping like a high school girl when her boyfriend was getting kicked in the neck.

@evgenikogan also "Cry me a River" isJ. Timberlake's song. I thought you were a fan of Brittney Spears.

@ufcyou are crazy if you think you've seen the last of this twitter.com/CesarGracieBJJ…

Today's Fanpost of the Day comes from BE's Jack Slack, and he warns it may ruffle some feathers: New Breed? A Realistic Assessment of the UFC Heavyweight Division

Why You Buy Heavyweight Fights

Heavyweight fights have always been viewed as the ticket sellers, which is why the atrocious Frank Mir vs Cro Cop match up (replacing the only slightly less atrocious Frank Mir vs Big Nog 2 match up) was still able to headline a UFC event, despite a wealth of talent elsewhere on the the same card. People pay to see heavyweights because big men can generate a lot of force in their punches, tend to have a harder time covering up (due to their massive frames) and gas so quickly that a knockout delivered by the second man to tire is pretty much assured.

When heavyweight matches go the scheduled distance however, they tend to be open mouthed panting, clinched against the fence affairs which put a dampener on the whole evening of fights. Sean Sherk vs Evan Dunham was a back and forth technical exchange with significant ramifications at lightweight, buried in the memory of fans beneath 3 rounds of Frank Mir failing to take down an opponent who was 30lbs lighter than him, with an injured eye.

Much of the talk three years ago, when Fedor Emelianenko had turned down the opportunity to fight for the UFC, was around the "new breed" of heavyweights. Men just as skilled as Fedor who were bigger, and a marked improvement on anything that had come at heavyweight before. How much of this "new breed" was hype? We'll examine that below.