Morning Report: Jon Jones and Rashad Evans Play Nice, But Can You Blame Them?

If you tuned into the UFC 145 pre-fight presser yesterday, you probably tuned in with a certain expectation. After all, a year-plus of outrageous smack talk has finally led us to this moment. Jones vs. Evans, tensions are high, it's about to go down. Right?

Well, not exactly. Instead of bringing the fireworks, both the champ and the challenger seemed to be just as tired of talking as we are of listening. In fact, not only were the accusations and arguments kept to a minimum, there were moments when both men seemed to be genuinely enjoying each other's company. Rashad's a winner. Jon's grown into a man. Rashad dresses nice. After being inundated with spite for so long, the friendliness was almost bizarre to watch.

But who can really blame them? They both said it themselves, it's hard to keep this up for a year. After you rehash the same story 4,000 times, the animosity loses its edge. And honestly, does it even matter at this point? Almost everybody taking time out of their day to watch a press conference is already going to buy the fight regardless.

Besides, Jon Jones does have a point. Rashad is a pretty snappy dresser.

Last year a Jackson's MMA documentary, Proving Grounds, was released, but that's not what the clip below is about. No, this is actually a newly-released outtake from 2009, in which Mr. Jon Jones semi-accidentally destroys a hippie teammate. And it's awesome. (HT: Middle Easy)

After watching Forrest Griffin and Stephan Bonnar rehash their favorite Rogan & Goldy moments while discussing the finer points of preparing kangaroo meat, we've come to the conclusion that this needs to be a real show. Like, right now.

So we'll admit, we really have no idea what Rashad is saying in this interview. But seriously guys, just look how happy he is! (Props to @snazzjohngenius for the find.)

If we're being honest with ourselves, the coaches' arguments are really the best part of The Ultimate Fighter. And with doozy lines like, "You've had four title fights, you've lost all of them," and, "Go get in your grandpa's Mercedes and go home," we'd have to say Dominick Cruz wins this round. 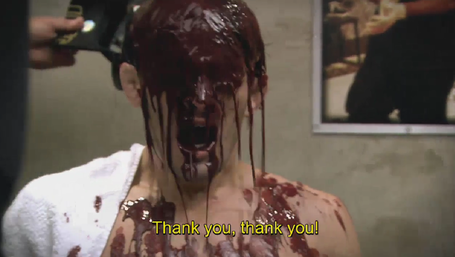 Me @ the press conference.. If I answer one more Jon Jones question I'm gonna punch him in the face!!! Lol instagr.am/p/JklE1kE1LJ/

Today's Fanpost of the Day is a surprising flip of the script by Bloody Elbow's Dustinovsky: Evans is Closer to Ali Than Jones

If either of the fighters in the upcoming UFC Light Heavyweight title bout bears a significant resemblance to Muhammad Ali, historically speaking, it is Rashad Evans. The parallels between the main event of UFC 145 and Ali vs. Foreman in Rumble in the Jungle in 1974 are actually a little startling. Evans is in place as Ali, Jones as Foreman.

Rashad Evans is 32, the same age as Ali when he stepped in the ring against George Foreman, fighting an undefeated 24 year old champion in Jones who most view as virtually unbeatable (I'm ignoring Jones' technical loss to Hamill). Foreman, likewise, was 25 when he met Ali in Zaire. He'd never lost or come anywhere close, having brutally cleaned out the entire heavyweight division with shocking efficiency; he was 40-0 with 38 knockouts. He had recently blitzed Joe Frazier to win the heavyweight belt, knocking the champ down 6 times in less than 2 rounds. No one could remember anyone like Foreman, except maybe Sonny Liston (who Ali defeated at 22 to get the belt, but was a huge underdog going into that fight as well). Foreman had also demolished Ken Norton in a similar fashion for another 2nd round knockout of a former champ who had previously defeated Ali.

Ali, meanwhile, went to Africa as a former champ of quickly advancing age who everyone thought was certain to lose. Some feared for his safety against Foreman. At that time he had just two losses in his career. Evans, similarly, has only a single loss going into UFC 145.

Jones' merciless finishes of Rua, Machida, and to a lesser extent Jackson line up beautifully with the historical context of Foreman quickly blasting a series of foes which Evans either lost to or did not finish. Like Evans, Ali's only losses came from men who the current champ had easily destroyed. What I mean is, the inconsistent method of what we lovingly call MMA Math helps us all to see now what people saw in 1974, that the new champ was a stud the level of which an older former champ could not hope to match, and we got there by comparing common opponents. If anything, Ali had performed worse against his common opponents with Foreman than Evans has against his common opponents with Jones.