Rashad Evans has a leg up on Jon Jones because they used to be training partners. By now, it's the catch phrase of UFC 145.

But we've gotten so wrapped up in this idea, that the relatively large counter-point staring us right in the face had, for all intents and purposes, been ignored until the young champ brought it up yesterday. You see, the advantage goes both ways. Actually, it may tip more so to Jones' favor than Rashad's.

Consider this. If these two men were as close of friends as we've been led to believe, considering the rather large age gap between them, it isn't too far of a leap to think the relationship was something akin to that of a little brother/big brother. (You can sometimes still see shades of it when the two are in the same room.) And with Jones as supremely raw as he was, Rashad would have been an instrumental figure in his maturation as a fighter. Someone to emulate, and through that emulation, someone to dissect.

Their whole messy divorce happened a little over a year ago, and honestly, Rashad Evans a year ago probably isn't too different from Rashad Evans now. But Jon Jones a year ago, that fighter isn't even in the same stratosphere as Jon Jones now. That's the thing. Jones' growth has been so ridiculous, the idea that he couldn't have pieced together a strategy to defeat the man he dissected so intimately is somewhat ingenuous, especially considering the coaches that helped build that man are on Jones' side now. Of course, this is all just speculation, but we'll see if Rashad's trump card is really as one-sided as we've been led to believe.

Jon Jones: preparing for with Evans' coaches 'almost seems not fair.' Jon Jones flipped the script on his UFC 145 title bout against Rashad Evans, stating that it was almost unfair to be training with the coaches that taught Evans how to fight.

Alistair Overeem's manager says he has 'reasonable explanation' for failed test. Glenn Robinson, the primary manager to Alistair Overeem, said he feels very confident his client will be fighting Junior dos Santos on May 26 and that Overeem has a reasonable explanation as to why his testosterone-to-epitestosterone ratio was so far off-base. The NSAC's hearing is slated for next Tuesday.

UFC demands retraction from CagePotato. The UFC and Dana White served a demand for retraction to the website CagePotato regarding a satirical quote attributed to White in an April 14 article. CagePotato promptly issued a statement retracting the offending caption, however when asked if the dispute had been squashed, White responded, "not even close."

Right before Rashad Evans made his debut on TUF 2, back when he was a one-dimensional rookie to the game, "Suga" roared through the Gladiator Challenge Light Heavyweight Tournament. His unfortunate first victim: Mr. Bryan Pardoe.

How did the Naval Academy help shape Brian Stann into such a gentlemanly beast? "The All-American" explains in the debut edition of SB Nation's "Core of Sports" series.

You've seen Rocky, right? Yeah, translate that into a film about MMA and you might see something like this fight. The Homer Simpson defense never fails. (HT: Reddit) 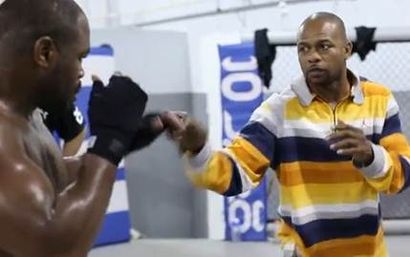 Who's the dick that stole my pants today at training? #underweardriving #wtfinstagr.am/p/JfrAktpTEn/

Today's Fanpost of the Day is a superbly comprehensive breakdown by BE's Luke Nelson: UFC 145: Can Rashad Evans Influence Jon Jones Into "Skipping To His Lou" And Crucial Mistakes?

At the highest levels of combat, the athletic abilities are often so even that they do not play a large role in the fight. Of course there are exceptions to this; Georges St. Pierre stands out as a fighter whose natural athleticism is nearly impossible to overcome. Brock Lesnar was thought to be of a similar ilk and indeed he was able to rely on his physical gifts to destroy men like Heath Herring and Frank Mir, much more technical fighters than himself. When he came up against fighters who could either offset his wrestling with their own, or had an equal amount of brute strength, he was exposed as a mediocre fighter, unable to influence his opponent in any way.

On the opposite side of this coin is Anderson Silva, a fighter who is so in tune with his opponents that fans have openly wondered if he is proof that we are indeed living in some an artificially constructed reality. The diversity of the attacks with which Silva has beaten his various opponents is truly spectacular. How can one fighter use so many different methods to such a great degree of success? To put it simply, Silva knows where his opponent is going to be before they are there. This isn't to say it is a simple task; it took years and years of training for Silva to reach the level that he is at, but it is the most critical element to his success.

This ability to seemingly "control" your opponent was alluded to by Rashad Evans during the first of two Fuel TV "Ultimate Insider: Counterpunch" segments that he and Jon Jones appeared on last week. During the confrontational clip, Evans and Jones discussed how they themselves saw their fight (the headlining match at this weekend's UFC 145) going and towards the end of his comments, Evans declared: