But now the summer of violence has finally arrived, and while UFC on FUEL 2 may be a relatively low key appetizer, Saturday's card still has storylines for days. Here's a quick top five: 1.) Is Alexander Gustafsson for real, and can he eventually challenge Jon Jones? 2.) Will consecutive year-long layoffs prove overwhelming for Thiago Silva and Alessio Sakara? 3.) Did Brian Stann's back-to-earth loss mean he was rushed to the top or overrated to begin with? 4.) Can the Swedish crowd possibly be as raucous as the Brazilians and Canadians? 5.) How will Siyar Bahadurzada handle the pressure of being the first native Afghan in the UFC? 6.) Is Paulo Thiago a one-hit wonder or a victim of unlucky matchmaking? 7.) Can Dennis Siver make a legitimate run at ... whoa, got a bit carried away there. Sorry, let's continue.

What's at stake? UFC on Fuel 2 edition. Take a closer look at Saturday night's fight card to see what the UFC on FUEL 2 fighters are up against, what can be gained from a win and where they could find themselves after a loss.

The hurt business: the price of principles. Controversy invades the Grudge Training Center in part six of Ben Fowlkes' multi-part series that goes inside an MMA fight gym to examine the hidden lives of pro fighters.

Film review: Fightville. Set to release later this month, the award-winning film Fightville chronicles the rise of UFC featherweight contender Dustin Poirier while capturing the highs and lows of an unforgiving sport.

Tito Ortiz rallies against TRT. Former UFC light heavyweight champion Tito Ortiz denounced the necessity of testosterone replacement therapy in mixed martial arts, telling Fighters Only, "If you do have to do it, don't fight anymore."

Jon Jones vs. Rashad Evans is just a week away, and even the pros can't help but take a stab at the next 205-pound kingpin.

Just when you thought the #RallyForMarkHunt movement was slowing down, NickTheFace goes and does something awesome.

So, we're not really sure how this slipped past us, but apparently there really is a market out there for everything. (Possibly NSFW.)

Before Thiago Silva was 13-0 and the next big thing in the UFC's 205-pound division, he was just a 23-year-old kid trying to make it in the local Brazilian scene.

Someone finally got their braces off. (via Cagepotato/Facebook) 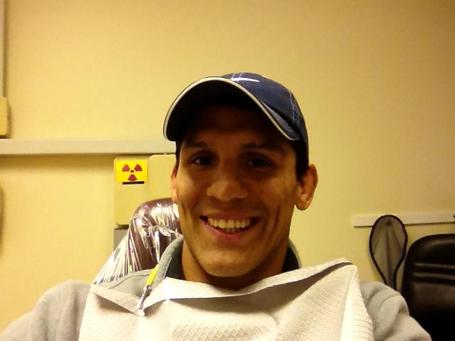 @RondaRousey @NateDiaz209 @nickdiaz209 @ufcI swear this girl is badder than most of the male fighters out there! twitter.com/CesarGracieBJJ…

We asked for @Renato_Laranja for @nickdiaz209 but they gave us Braulio Estima. WTF? Thanks a lot @RenzoGracieBJJ

Today's Fanpost of the Day is a conspiracy theory with some legs to it, by Bloody Elbow's flamingmo: Further Proof that Joe Silva hates Yoshihiro Akiyama - Thiago Alves fight set for UFC 149

Yoshihiro 'Sexyama' Akiyama is 1-4 in his UFC run, and is surely in danger of being cut by the organisation if he loses again. This would be a terrible shame, as each one of Sexyama's UFC fights have been incredibly entertaining, and his inclusion on the main card of an event generally means that there will be at least one fight packed with excitement.

The other unfortunate thing about Akiyama's UFC run is that fact that he has faced a murderer's row of opponents, with each opponent being better than his last. Thiago Alves may actually be a slight step down from Jake Shields, but the fact remains that while other fighters are relegated to undercards and have to build themselves up fighting less threatening opposition, Akiyama gets thrown to the lions every time out. Here's a look at the 5 opponents he has faced in his UFC run.