Wednesday was looking like a pretty slow news day right up until the moment it wasn't. Two announcements later and the MMA community had experienced a minor explosion.

Within a span of a few hours, UFC 146 transformed from a solid card to one of the year's best lineups (and perhaps one of the best in recent memory). What we now had was a heavyweight extravaganza, sporting a mammoth title fight (dos Santos vs. Overeem), a solid number-one contenders bout (Velasquez vs. Mir), and a slobber-knocker duel between lower contenders (Silva vs. Nelson). Score one for the big guys.

Around this time, various commentators on this site starting referring to the Memorial Day weekend event as a theme card, the likes of which we haven't seen in quite a while. But why? While booking all heavies surely doesn't do much in the way of diversity, it certainly seems like a cool way to keep a division running smoothly. No more waiting around for everyone's timetable to match up. Instead just have the top six or eight guys slug it out on the same night. Winners fight winners as soon as possible. Everything keeps flowing, unlike some divisions (I'm looking at you, lightweight).

Of course, overuse of this would probably get a little boring. But every once in a while, why not just throw a theme card out there to get people's blood pumping? Besides, multiple hours of heavyweight violence is an idea I think most of us can get behind.

Cain Velasquez vs. Frank Mir set for UFC 146. Velasquez and Mir have agreed to meet in a Memorial Day weekend match-up to determine the UFC heavyweight division's next number-one contender.

Antonio 'Bigfoot' Silva vs. Roy Nelson slated for UFC 146. Roy Nelson's drop to 205 pounds may seem inevitable at this point, but right now he's still a heavyweight. So what better way for him to go out than by taking on a giant of a man on the year's premier heavyweight card?

Josh Koscheck: If AKA had real coaches, it would have produced more champions. Koscheck blasts his former coaches at American Kickboxing Academy, before discussing his new gym and his upcoming fight against Johny Hendricks.

Pat Barry planning on letting hair grow until he submits someone in UFC. Ariel Helwani caught up with the always-entertaining Pat Barry and somehow the conversation turned to pizza and haircuts.

COUNTDOWN TO A SLIMMER ROY NELSON

Watch as The Ultimate Fighter 15 coaches Dominick Cruz and Urijah Faber go to war at UFC 132's contentious championship match that, even to this day, each man still believes he won. (via UFC.tv) Click the image to watch. 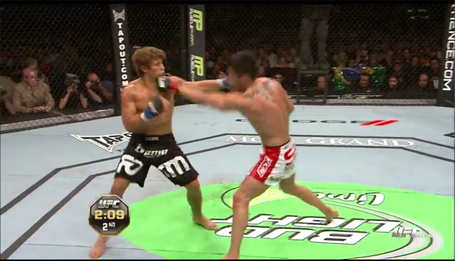 Our own Ariel Helwani found himself embroiled in the latest MMA judging controversy on UFC Tonight's "Fighter vs. Writer."

Take a look at Myles Jury, one of TUF 15's early favorites, as he takes on Tyronne Holmes at KOTC: Encore. (Check out the bonus cameo by referee Cecil Peoples.)

Joe Lauzon provides some refreshing perspective on this final UFC 144 vlog, which documents the before and after of his fight with Anthony Pettis. Click the image to watch. 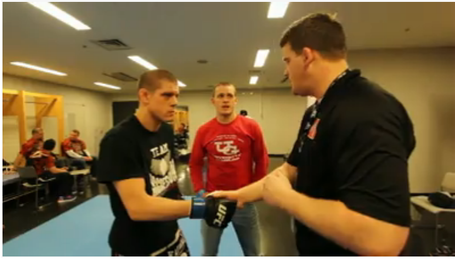 Now May 5 is coming! Mr lucky punch Jonny was a fat lil boy yesterday in NYC. Better get training kid! Bc I am in shape& it's not round!

STEALING A PAGE FROM SONNEN

The UFC doesn't hold another event until April 14th. Until then, TUF has to hold us over, but once we get there, it should be great. The UFC has 8 scheduled events for April, May, and June. Five of those are free, and three are Pay Per Views. In the three Pay Per Views, we get to see three Title Fights as Jon Jones finally fights Rashad Evans (one of them will probably get injured and have to pull out though), then the epic Heavyweight fight between Junior dos Santos and Alistair Overeem, and finally the long awaited rematch between Chael P. Sonnen and Anderson Silva-in Brazil, no less. The UFC better hire extra security. If you thought the "You're gonna die" chants directed at Chad Mendes were crazy, just wait til they see Sonnen. UFC 145 and 147 are both going to do more than 500,000 buys, which the UFC is starving for. 146 is a total wildcard since we have no idea how well JDS or AO will draw.

In terms of free events, the UFC will continue to kill it. We're getting 50 to 60 free fights in the next three months. Just think about that for a second. Has this ever happened in UFC or MMA history?