Roy Nelson is 35 years old. He's been under UFC contract for the last three of those years. Conveniently, that's also about how long Dana White has been pressuring "Big Country" to cut the belly-rubbing and downsize to light heavyweight.

Now, apparently being on the wrong end of a beating from Fabricio Werdum may have finally brought Nelson around to the idea. But it's not going to be that easy.

Nelson has proposed a friendly wager with the mixed martial arts community, and if he loses, he says he'll begrudgingly trim his six-foot, 245-pound frame down to a sleeker 205-pound model. Find out all the details and catch up with the biggest stories in MMA with the Morning Report.

Roy Nelson's bet: he will drop to light heavyweight if you 'like' him on Facebook. We briefly touched on this yesterday, but what was first a drizzle has now become a downpour. Basically, Nelson says he'll make the drop to 205 pounds if he can add 100k Facebook likes in two weeks. He started at 32,000 on Sunday night. As of this writing, he's at 73,423 and counting. He might want to start cutting down on that diet.

The MMA Hour is back. Ariel Helwani and The MMA Hour returns with a doozy of a show, featuring Strikeforce star Ronda Rousey, new UFC champ Ben Henderson, the legendary "Judo" Gene LeBell, exiled UFC heavyweight Tim Sylvia and a few bonus surprises along the way.

Strikeforce medical suspensions and injuries. Miesha Tate and three others have been suspended indefinitely for injuries sustained during Saturday's Strikeforce: Tate vs. Rousey event.

Josh Barnett granted California license. Barnett was granted a conditional fighters license by the California state athletic commission via a 4-2 vote, clearing the way for "The Warmaster" to fight in Strikeforce's Grand Prix Final against Daniel Cormier on May 19.

There are no words to describe how catastrophic this Bryan Jones leg/knee injury is from Saturday's CAGEQUEST event. Seriously. Don't even watch this. NOT SAFE FOR LIFE. (HT: MMA Mania)

Dana White lambasts Floyd Mayweather when the conversation turns to Mayweather vs. Pacquiao. Take it away Dana: "Split the money. It's going to be the biggest PPV ever, shut the [bleep] up and fight. Just [bleep] do it, people are tired of it."

Jacare Souza says he broke his left hand about ten minutes before submitting Bristol Marunde on Saturday night. And if you don't believe him, maybe this x-ray will change your mind. (Protip: check out the thumb.) Click the image for closer look. (HT: Tatame) 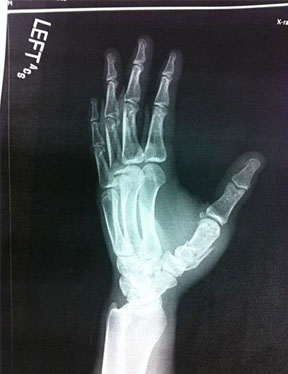 I think I'm winning the battle vs staph infection!!!! I not easy to finish....ask Feijao!!! Lol.

How much would you pay to see this? At least five or ten bucks, right?

Yo @UFC, @DanaWhite, set up the fight between @OchoCinco & I already. twitpic.com/8sj9vj

The introduction of jujutsu to Australia is often credited to Mr. Cecil Elliott, who's story resembles that of Edward Barton-Wright, the founder of Bartitsu, and his introduction of jujutsu to England and Europe. Like Edward Barton-Wright, Cecil Elliott was an Englishman, having been born in the village of Hackelton, North Hamptonshire on May 20, 1875, and also like Wright he traveled extensively, having enlisted in the Royal Navy as an Apprentice Seaman at age 16. Eventually he would become an officer and his duties would take him to Japan where, just as Barton-Wright had done before him, he took up the study of jujutsu, obtaining first dan in Yokohama in 1904. The next year he left the Navy and relocated to Sydney, Australia, where he found employment at Mr. R.F. Young's School of Physical Culture. The school's primary focus had been on the Sandow system of physical exercise, but Mr. Young had not failed to notice the interest jujutsu was garnering around the globe (partly thanks to the efforts of Barton-Wright), advertising that:

"Schools have been established in England and America. His Excellency President Roosevelt has evinced great interest in the method by taking instruction therein from a well-known Japanese Instructor, and the United States Government are having it specially taught as SCIENCE to the young officers of the Army and Navy."

The School of Physical Culture soon added jujutsu to the curriculum, and in early 1906, Elliott hosted a jujutsu exhibition before an audience that included the New South Wales Commissioner of Police, Mr. Mackay. It is often reported as having been the first such public demonstration of the Japanese martial art ever held in Australia. It also proved to be a success and soon the school was flooded with inquiries from potential students. When in need of instructors for his Bartitsu club, Barton-Wright had imported jujutsukas from Japan, and so Elliott wired Yokohama, looking to do the same.