Well folks, we're halfway there. 21 days up, 21 days down, and now just 21 days left until the UFC hits with a blistering summer lineup.

If you missed it, The Ultimate Fighter: Live and Bellator found a new weekend friend -- TUF: Brazil (which can be seen in its entirety here). Given that Brazilians make up 43-percent of the current UFC champions, expectations for the first international TUF season were understandably high, but if your violence quota was in any way lacking, it admirably filled the void. Plus, where else could we hear Wanderlei Silva bragging about his junk? (More on that later.)

Weekend MMA & boxing results. Catch up on another busy combat sports weekend with MMA results for The Ultimate Fighter: Live, The Ultimate Fighter: Brazil, Bellator 62, United Glory 15 and BAMMA 9, boxing results for Erik Morales vs. Danny Garcia, and fight videos of Patricky Freire vs. Lloyd Woodard, Rick Hawn vs. Ricardo Tirloni, and Kimbo Slice's absurd match against Brian Green. (And again, if you haven't seen the debut episode of TUF: Brazil yet, you can check it out here.)

M-1 Global sues Vyacheslav Vasilvsky. Bellator middleweight semifinalist Vyacheslav is being sued by M-1 Global over an alleged breach of contract, and could be forced to pay €1,000 for each day in violation (over 365 days, according to M-1), €5,000 for each fight in different promotion (five since 2010), and court fees.

Yasubey Enomoto defended M-1 Global title with open wound infection. Former M-1 Global welterweight champ Yasubey Enomoto fought at M-1 Challenge 31 with a large open infection on his shin, which has now spread to his knee as a result of the weight cutting process. Enomoto is currently hospitalized and receiving treatment.

Where else but a Japanese game show could you see Cyborg Santos duke it out with a shockingly capable male comedian? This battle of the sexes actually gets pretty heated. (HT: Bloody Elbow)

Another under the radar nugget from the weekend: Sergei Kharitonov returned to action for the first time since his Strikeforce loss to Josh Barnett. Now watch this ridiculousness and tell me you wouldn't love to see him on the UFC's all-heavyweight card.

Three weeks into TUF 15 and not only is Team Cruz dominating the Octagon, they're crushing the YouTube battle as well. Check out The Dominator clowning on Faber in this reenactment. Nice extra touch: the sharpie'd Faber chin.

Today's episode of This Week in Questionable Reffing comes from CFC 12, featuring Mark "The Great White Shark" Potter knocking out Larry Watts, a guy wearing a t-shirt waving off the bout, but not actually waving off the bout, and the bout continuing for another one-sided 30 seconds. (HT: Cagepotato) 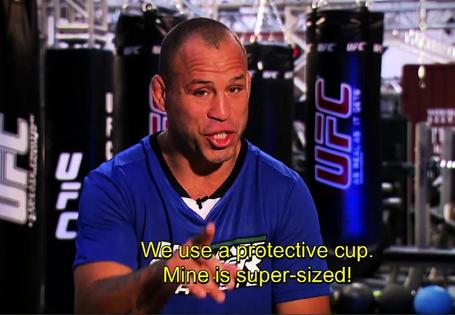 THE CARNY DROPS DOWN

I dont have a fight scheduled yet, but my next fight will be at 145 lbs! #UFC #MMA

YOU WIN THIS ROUND, ROCKHOLD

Today's Fanpost of the Day is a fantastic rundown on the future of the 145-pound division by Bloody Elbow's fightinghistorian: Can Jose Aldo be Beaten? A Meditation on Perfection in MMA Today

Jose Aldo is currently riding a fourteen-fight winning streak, with eight of those wins coming by absolutely vicious knockout. He has not been seriously tested during that time: in fact, he has only lost three or at most four rounds out of twenty-eight since making his debut in the WEC, and has never found himself anywhere close to being finished or losing a decision. I say this not to rehearse the obvious point - that Aldo is really, really good - but to emphasize the sheer enormity of his dominance since reaching the biggest stage in MMA.

It's possible that we've never seen a fighter as well-rounded as Jose Aldo, GSP included, and I would argue that we've never seen anyone with his combination of well-roundedness, explosive athleticism, and absolutely vicious finishing ability. At this point, then, one question stands out: who is capable of beating Jose Aldo? My intention here is to briefly discuss all possible challengers, with the goal of discerning who precisely has the best chance of beating him at featherweight; there are potential matchups at 155 as well, but I'd like to focus on the here and now.

Let's start with the obvious contenders first. For each, I'll give a brief rundown of when they might expect to receive a title shot, the most likely fashion in which such a fight would play out, and finally my guess at what the betting line would be, purely as a means of quantifying the likelihood of a win by the contender. (Note: -400 means that Aldo would be a 4-to-1 favorite, for example). After running through the list, I'll conclude with a discussion of what Aldo's dominance means for the sport of MMA as a whole.