If we can, let's rewind a couple weeks to March 2, 2012. Miesha Tate and Ronda Rousey are doing their thing, Strikeforce weigh-ins go off without a hitch, and then Bryan Caraway says some unfortunate things about knocking Rousey's teeth in.

Now, as a man, making public statements about beating women probably isn't the smartest idea. But a funny thing happens the next night. Miesha Tate's arm is nearly snapped in half. Twice.

And a minor debate pops up in the MMA community: could Rousey actually defeat Caraway? Of course, the arguments were purely speculative, because sanctioned MMA matches between men and women could never happen. But, that's not entirely true.

Anthony Pettis to undergo surgery, out eight weeks. According to intrepid journalist Chael P. Sonnen, "Showtime" will be out for eight weeks due to upcoming surgery, and when he comes back, it'll be at 155 pounds.

Ian McCall vs. Demetrious Johnson rematch official. Uncle Creepy vs. Mighty Mouse for the flyweight semi-finals has been added to UFC on FX 3, which is slated for June 8, 2012.

About that Mirko Cro Cop retiring thing, yeah, that may not be true. Cro Cop revealed he may be over the retirement hump and mulling a return to K-1 or MMA.

The wrestling draft: which NCAA stars are headed for MMA? Luke Thomas takes a look at today's best collegiate wrestlers and graduating seniors who could possibly make the leap to MMA stardom.

If you've never seen the 'Will It Blend' series, here's a quick rundown. A guy in a lab coat named Tom puts things in a blender and turns it on. Sounds simple enough. Anyway, Tom and Ecko teamed up to play a little prank on Johny Hendricks and Brendan Schaub. Schaub's slow transition from laid back guy to raging 250-pound man is impressive.

Here's an example of those Fort Hood U.S. Army Combative Championships inter-gender matches we were talking about earlier. Man vs. Woman in the tournament final. (HT: Bloody Elbow)

We're not really sure what the hell this is, but here you go. (HT: Reddit)

Chael Sonnen, Pat Miletich, Renzo Gracie and our own Ariel Helwani explain how silly it is for New York to ban MMA.

Let's be honest. Some of you out there have probably thought about smashing Justin Beiber's face. Well that's never going to happen, but you can imagine what it'd look like with this Complex photo gallery. (HT: Middle Easy) 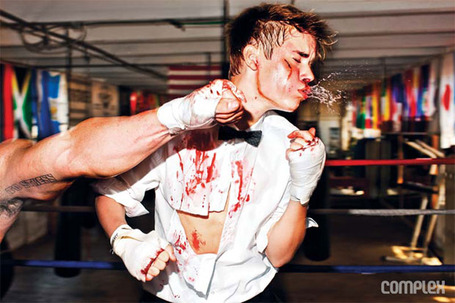 EVEN THE WOMEN IN THAT ROOM COULD BREAK YOUR FACE

The brazilian verzion of the reality show The Ultimate Fighter is about to start it. Everyone is excited to see it! twitter.com/ToquinhoMMA/st…

Today's Fanpost of the Day comes from Morning Report regular, Hobbie: Ortiz vs. Griffin: The Redheaded Step-Child of MMA Trilogies

The truth is that for most fans, the Ortiz/Griffin series is the redheaded stepchild of MMA trilogies. These guys are like bad in-laws: they're old, rich, have a laundry list of injuries, and show up once every few years to make your life miserable.

This lukewarm fan reaction is utterly mystifying to me, pretty much for the reasons I mentioned above. It's another strange MMA phenomenon I don't understand, like the compulsion to chant "USA! USA!" at any foreigner, or insisting on excitement>winning when it comes to liking fighters while at the same time claiming that anyone with consecutive losses is over the hill and should retire.

Individually, these guys are two of the most popular fighters in the UFC today. Despite both guys being outside the title picture, they still get strong reactions from fans whenever they fight. There's really no scenario where fans wouldn't be excited to watch these two guys fight - unless it's with each other.