Another week rolls by without a major UFC event, and another MMA-packed weekend cuddles up and fills the void.

Besides the usual offerings from Bellator and The Ultimate Fighter, we saw a slew of old-school PRIDE names this weekend. Guys like Aleks Emelianenko, Jeff Monson and John Alessio hit the stage, and even good old Gabe Ruediger got in on the action. Add in the NCAA wrestling championships and the latest visual evidence in the to-touch-gloves-or-not debate, and that's a pretty full plate we've got on the table. So if you missed any of it, or you just want to see Rashad Evans accuse Jon Jones of dressing up in drag, catch up with today's edition of the Morning Report.

Weekend MMA results. Check out this weekend's MMA buffet with official results for The Ultimate Fighter: Live, Bellator 61, M-1 Challenge 31, BAMMA USA 'Badbeat 5' and The Score Fighting Series 4, plus video highlights for Brian Rogers vs. Vitor Vianna and Sheila Gaff vs. Jennifer Maia, along with boxing results for Sergio Martinez vs. Matthew Macklin.

Rampage Jackson clears the air. Rampage revealed that the UFC has agreed to pay for his knee surgeries, while elaborating on his recent rants and proclaiming the Zuffa brass to be not 'that bad' in a recent interview.

Forrest Griffin, Dominick Cruz, Urijah Faber, Mike Pierce and others talk about Jon Jones' remarkable 6-to-1 line over Rashad Evans and predict the winner of the light-heavyweight grudge match.

Check out half of the fabled Emelianenko bloodline in action as Alexander takes on Tadas Rimkevicius at Friday night's M-1 Challenge 31 event.

The challenge: watch this fan-made UFC 146 trailer and try not to get giddy with excitement. (HT: Middle Easy)

Matt Serra may not be making his UFC rounds lately, but that doesn't mean he's stuck on the shelf. The former champ earned a promotion to 3rd Dan Black Belt from BJJ legend Renzo Gracie over the weekend. (Photo via Facebook.) 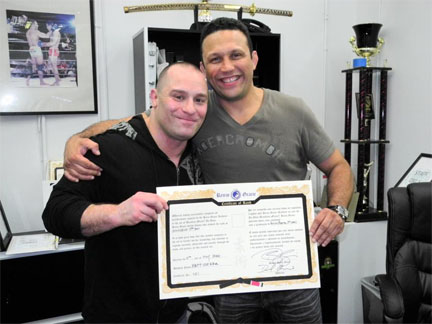 Who's that on the April cover of Men's Health magazine? Oh, it's just Shinya Aoki. (HT: Bloody Elbow) 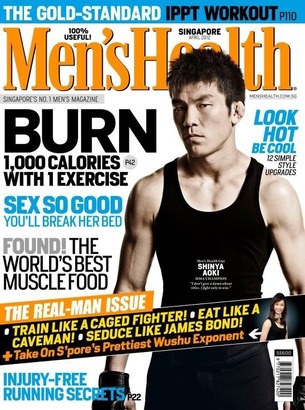 Damn! Jon Jones is always trying 2 one up me! I take a pic with a wig on & he goes full drag on me! Fine bro instagr.am/p/IQcSUdE1Er/

I CAN CONFIRM THIS TO BE TRUE

#ArizonaTruckStops where you can do your laundry, buy samurai swords, eat subway, and see a woman with a full grown beard all in one place

Today's Fanpost of the Day is an incredibly moving story from Bloody Elbow's hobbie: The Only Reason I'm Here Right Now

We're standing in the back of an impossibly long line stretching around the Bell Centre in Montreal, Quebec when I first hear it. It begins as murmurs, excited whispers, moving through the crowd like brushfire. The same three words on everybody's lips: G. S. P. I strain to peer beyond the crowd when I finally see it. Across the street, getting out of a black SUV with his entourage, is the man himself.

And of course, the crowd goes wild. And strangely (or not) I'm caught up in it as well, cheering for the Great Canadian Hope alongside all the other diehards who've lined up for hours just to see him stand on a scale. That's because today is the weigh-in for UFC 83, the first ever UFC event on Canadian soil. It takes a diehard MMA fan to line up for a simple weigh-in. Montreal apparently has thousands of them.

I realize now, looking back, that I was flanked in the moment by two of my heroes. The one across the street was larger than life, my hero only because every so often I watched him beat legitimate tough guys to a pulp on Pay-Per-View (this was back in 2008 when that still happened). Then there was the one standing next to me.