Candor is a rare currency in professional sports. With the rise of the social media machine, honesty and personality are often considered taboo. In their place, athletes are taught to give little more than canned answers straight from the mouth of P.R. engines, and who can blame them when one slip-up has the potential to explode in an instant?

Rarely do you see an interviewee as heartbreakingly forthright as Chris Leben was on Monday. As he poured out his mortality on The MMA Hour, accepting full responsibility for his ongoing battle with substance abuse, Leben ceased being "The Crippler" and instead reverted back to Chris, a simple 31-year-old man struggling with the pressures and anxieties of real life.

It's easy to become jaded with sports, but interviews like his help remind us that there is a very real human element to all of this that is too often forgotten. So if you haven't heard it already, do yourself a favor and check out Leben's words.

Chris Leben talks rehab. Leben, for the first time since receiving his UFC suspension, candidly discussed painkiller and alcohol addition, and the rehab that has him fighting for his life.

TUF: Brazil cast list revealed. Sixteen middleweights and sixteen featherweights have been announced as the opening field for the inaugural season of The Ultimate Fighter: Brazil.

Dana White says UFC may move away from PPV. White opened the door for the UFC to possibly transition away from the pay-per-view business model in the future.

COUNTDOWN TO A SLIMMER ROY NELSON

So it looks like Roy Nelson won't be losing this bet after all.

* MMA fan's dream: Uh... spar with the most dangerous featherweight on the planet? Not quite the same ring to it, I'll admit, but this (un)lucky fan took his half-hearted Aldo beating like a man. (HT: Middle Easy)

Daron Cruickshank may have caught some eyes when he flashily defeated Drew Dober to earn his way into the TUF 15 house, but it all started with this tryout video.

After last weekend's latest round of 'What Will Bob Sapp Tap To?', it seems strangely necessary to remind everyone this exists.

Now that the cast list for TUF: Brazil has been announced, check out this early promo from Globo TV. 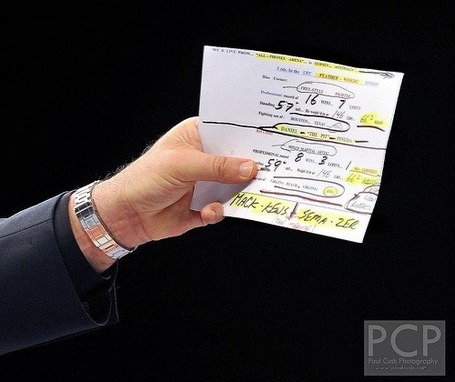 The @ufc knew I was hurt,n almost everyfight I was hurt n,but instead of saying thanks 4 not pulling out,they talk shit about a poor job....

I did,I never missed weight,but when I do, nobody stop 4 a second 2 ask if I was hurt,yall just quick 2 talk shit,so I'm done with themafter

@LynchOliver y? So I can keep being under promoted n giving leg humpers who just wants 2 take me down all the time instead of havin a show?

With no major UFC or Strikeforce event on the cards for a couple of weeks, those of us who are uninterested in The Ultimate Fighter will have to find other ways to entertain ourselves. One of my personal favorite activities at a time like this is to dust off the videos of legendary Ukrainian mixed martial artist, Igor Vovchanchyn. Igor's power was paralyzing, his style inspired tension until the match's conclusion, and his ability to leave bigger men in crumpled heaps gave birth to fear and admiration in equal measure.

One of the most fascinating features of Igor Vovchanchyn's life is that he was essentially a kickboxer when he entered mixed martial arts. Despite this being thought at the time to be a handicap, Igor went on an unparallaled winning streak against bigger, stronger, wrestlers and grapplers - becoming the single consistent exception to the "grappler beats striker" rule of early MMA.

Vovchanchyn is always given the credit he deserves as a terrifying power puncher, but he is rarely celebrated, as he should be, for his technical ability. Many observers simply see the wide swings and assume that Igor was a barn-burning brawler and no more. But brawlers had never had results knocking out grapplers - striking wide was an invitation for a clinch or takedown. Limited in the number of punches or combinations he threw, Igor had means of dragging grapplers into exchanges wherein he could knock them out nonethless. In this series we shall examine a few of Vovchanchyn's slickest tricks.

Found something perfect for the Morning Report? Just hit us on Twitter @shaunalshatti and we'll include it in tomorrow's post.