In any other sport, this turn of events would be fairly frustrating. But that's the unique thing about MMA (and the UFC in particular). What the community wants, they generally get. Were it not for Nick's love of weed, the Diaz-Condit rematch would likely already be on the books. So this is really your call.

Do you want to see Frankie Edgar rematch Ben Henderson? Would you rather see him drop down to challenge Jose Aldo? Or would you just like to see him work his way back up the lightweight ladder? Catch up with the latest in the Frankie-Bendo-Dana saga and let your voice be heard with the Morning Report.

Frankie Edgar: I'm staying at 155, and I want my rematch. Edgar demanded his rematch while nipping a drop to featherweight in the bud on Wednesday's The MMA Hour.

Frankie Edgar guaranteed automatic title shot at featherweight. Despite Frankie's request, Dana White remained in favor of the former champ dropping to featherweight, and he's willing to sweeten the pot to get him there.

'Shogun' Rua wants rematch with 'Rampage' Jackson. Shogun revealed that he and Rampage both refuse to retire until they can meet in the cage one final time.

The resurrection of Ian McCall. From drug abuse, to prison, to a near-death experience, McCall details the incredible road that has him poised two fights away from becoming a UFC champion.

The lesson here: If Donald Cerrone goes to your gym and offers free sparring, please know what you're getting into. Don't worry though, they buried the hatchet and went to Hooters afterward. True story. (HT: Cage Potato)

Here's one guaranteed to make you smile. Bendo hangs out and practices with some kids in a Tae Kwon Do gym in Korea. (HT: Middle Easy)

Courtesy of Spike TV's MMA Live Uncensored, any old-school PRIDE fan needs to check out this fascinating insider look at the promotion's yakuza involvement and eventual demise. Check out parts 2 and 3 in the sidebar here.

What do you know, Fedor finally found his way onto a UFC Topps trading card. Anything to rub the salt in the wound, I guess. Click the card for mega size. (HT: Middle Easy) 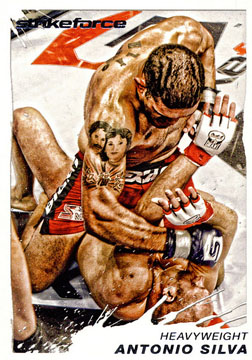 Donald Cerrone offered a surprising explanation for his UFC 140 loss to Nate Diaz.

Not over looking him! Last time i did didnt end so wellRT @JennyFriedman1: @Cowboycerrone Stephens sucks, you so are going to KO him!

No but i took nate lightly 😁RT @JennyFriedman1: @Cowboycerrone oh shit, he already kivked your ass before?

So... There are 29 days in February this year. I was way more thrown off by that than I'd like to admit. But I just did.

Today's Fanpost of the Day goes to MMA Mania's James Goyder: Yodsanan Sityodtong: The Boxing World Champion Who has Learned to Love MMA.

There is often cynicism when a world class boxer announces they are transitioning to MMA. Fans are inclined to suspect them of simply jumping on the bandwagon with a view to picking up a James Toney style pay day. However Yodsanan finished his boxing career in a high, stopping all of his last nine opponents and is far from being past his prime.

He is now totally committed to his MMA career and is training every day with the team of world champion trainers at Evolve MMA in Singapore. As well as being a renowned boxer Yodsanan also has plenty of Muay Thai experience and is being nurtured as a mixed martial artist by the likes of renowned wrestling coach Heath Sims and BJJ Mundials winner Rafael "Gordinho" Correa de Lima.

It is the perfect university for him to graduate from being an accomplished stand up fighter to a well rounded mixed martial artist and he has also been training alongside the likes of Shinya Aoki, Eddie Ng and Zorobabel Moreira. However Yodsanan was not rushed into his MMA debut at ONE FC 1 last September, in fact he had been preparing for well over a year.