After hurtling through four events in four weeks, it almost felt weird to not have some fights lined up for the weekend. But then this happened and things got crazy. Catch up on the UFC's biggest rematch since Edgar-Maynard with the Morning Report.

UFC vs. Pride was one of the most fun times of Dana White's life. The UFC President reflected back on the only organization he ever considered a competitor.

Spike TV counters UFC on Fuel TV with Diego Sanchez marathon. Like a jilted lover, there appears to be no end in sight for Spike TV's war against Fox.

Anderson Silva ventures out to fight with the indigenous tribes of Brazilians in this Globo TV report. Only a matter of time until Chael sees this and promptly has a field day with it.

Joe Rogan weighs in with his take on Condit-Diaz and the difficulty of judging from a commentator's perspective. (HT: Bloody Elbow)

Nothing new here, but a great clip for your daily dose of violence. The enigma of Badr Hari retires as only he could, brutally rematching Gokhan Saki at 'It's Showtime' late last month.

The UFC finally uploaded their new pay-per-view intro (but no embedding allowed, of course), so for anyone that missed it the first time around, click the image below to watch. 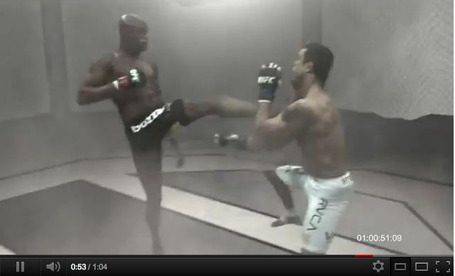 @JoeLauzon
Joe Lauzon Is it ironic or just predictable when following a state trooper for 10 minutes before he pulls into a Dunkin Donuts?
Feb 07 via HootSuite Favorite Retweet Reply

Except rice milk. That stuff is weirdly delicious.

Today's FPOTD belongs to BE reader Benjamin Cole: UFC Pay-Per-Views at Bars: The People You See.

In my years as an avid MMA fan, I've been lucky enough to attend two live UFC events. With that said, I've only attended two live events. I'm a young guy; my friends like watching MMA, and I love drinking beer. So where does that leave me? Spending anywhere from 6 to 15 or more hours per month sitting in a bar, usually craning my neck staring at a flat screen TV, either sipping or slamming an adult beverage.

The past several years spent watching UFC events in bars have been glorious. I love the atmosphere and I love those Saturday nights. With this experience, I've become accustomed to seeing the same little slices of fandom, almost entirely regardless of the bar. Without further ado, the following are the people or groups that I (and, I'm assuming, most BE readers) typically observe in their natural, violence-lusting, habitat.

Found something entertaining, brutal, or just plain bizarre for the Morning Report? Send it to me at @shaunalshatti and we'll include it in tomorrow's post.