Kimbo Slice achieved web stardom in 2003. He made his MMA debut with a win over Ray Mercer in 2007. He parlayed that into the CBS spotlight, shattering ratings records with the first MMA event ever aired on American network primetime in 2008.

Somehow he wound up in the UFC, cast on season 10 of The Ultimate Fighter, again shattering rating records in 2009. Finally, he earned his Zuffa pink slip after losing to Matt Mitrione and subsequently retired from MMA in 2010.

Between those last four years, one question was asked ad nauseum by incredulous fight fans -- why? What was the appeal, and more prominently, why was it so ridiculously successful? How did someone with no working knowledge of MMA become the posterboy for MMA in the eyes of non-MMA fans?

Even now, two years later, he somehow remains relevant, like a lingering storm cloud that refuses to pass. Just look to Ariel Helwani's recent quest to discover ‘How Mainstream is MMA?' as proof.

So of course Spike TV tapped his services in their ratings crusade against Fox. And you know what else? It'll probably work. Check out all the details of the new deal, and catch up with all of yesterday's big news with the Morning Report.

Spike uses Kimbo Slice to counter-program The Ultimate Fighter on FX. Spike TV tapped the services of the network's biggest-ever TV star in the war against Fox.

Dakota Cochrane discusses controversial past. The 25-year-old TUF hopeful addressed his pornographic past as he prepares to chase his UFC dream.

Sixteen months ago Ronda Rousey was just a 1-0 amateur fighter preparing to face Autumn Richardson in the Tuff-N-Uff quarterfinals. Crazy.

CNN recently profiled Mike Haskamp, the Legend FC co-founder who, in the midst of a recession, made the bold jump from U.S. investment banker to manager of his own Asian MMA promotion. (HT: Bloody Elbow)

Take a peek at slick counter-striker Yasuhiro Urushitani, who many consider to dark horse of the UFC flyweight tournament.

Looks like somebody was trying to pick up a few pointers on WWE's Monday Night Raw. (via @ACBattersby) 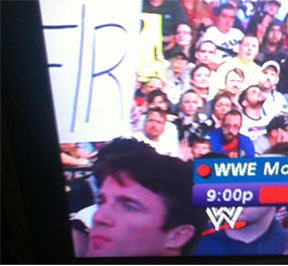 Sick of the criticism, Rampage finally shot back at Hendo.

@danhendo I was smart enough 2 take your belt

Wait... really? Why? What were the circumstances? This story needs to be told.

I cooked road kill raccoon during SERE school, and liked it. #TrueStory

Today's Fanpost of the Day goes to BE reader hobbie (for the second day in a row!): 5 Strange, Sad, and Downright Weird Facts about UFC 144.

Because UFC 144 was a strange card - and not only because it was in Japan, land of Godzilla, holographic pop stars, and soiled panty vending machines. There are some strange factoids about this UFC that, were I to go back in time and tell you just a few years ago, would have you calling BS. Who travels time to brag about weird MMA facts, anyways?

So without further ado, here are 5 fun, surprising, and downright bizarre facts from (and about) UFC 144. Bust one of these gems out next time you're at a party and want to impress all the fine lookin' ladies with your knowledge of MMA trivia...yeah...that's how that works.