After all we've been through in the early stages of 2012, the phrase "never leave it in the hands of the judges" has never meant more than it does now. Just ask Dana White.

Aside from griping and hand-wringing, the problem appears to be out of anyone's control, and with the UFC's flyweight tournament resting over the horizon, another judging disaster has the potential to implode the legitimacy of an entire division before it even takes off.

So it shouldn't surprise anyone that the UFC apparently has a plan, and according to "Mighty Mouse" Johnson, the wheels are already in motion.

UFC creates 'sudden death' rule for upcoming flyweight tournament. According to Demetrious Johnson, the UFC included a special provision in his contract to ensure the 125-pound tournament couldn't suffer the wrath of the judges.

UFC 144: by the odds. Ben Fowlkes runs down all the favorites and underdogs heading into Saturday night's pay-per-view.

A night in Tokyo with Rampage Jackson. Ariel Helwani walks the streets of Tokyo with Quinton Jackson in this candid look at the man behind the nickname.

Courtesy of the UFC, we'll kick things off with Rampage Jackson's most iconic moment at the Super Saitama Arena -- taking on Ricardo Arona at PRIDE Critical Countdown 2004. (click the image to watch) 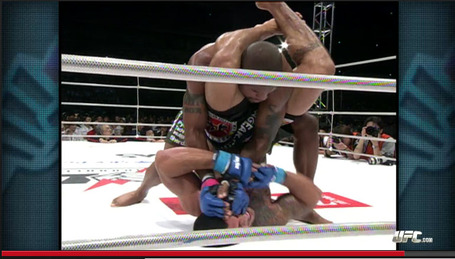 Now back to the present, as Jackson battles Ryan Bader in a special PRIDE rules simulation, complete with soccer kicks, knees to the head, and the ultimate game-changer -- stomps.

Of course, Bader has his own highlight reel, including this smashing of Keith Jardine back at UFC 110.

Stitch tells us the story of the bloodiest fight he's ever worked (starts at 0:26).

The official UFC Undisputed 3 predictions have been scarily accurate so far, so should Frankie Edgar be worried about this one?

Looks like Jared Papazian earned some sort of bonus for his UFC on FX war with Mike Easton after all.

I would like to to thank you @danawhite @lorenzofertitta @seanshelby @ufc for sending me my bonus. @danawhite is a man of his word

The untold plight of 125-pounders.

On a scale of 1 to surprising, how not surprising is this tweet?

My wife's killing me at Dance Central. I don't like loosing at anything.

Let's take a look at how "Bones" measures up.

He recently stated 240-pounds would be an ideal weight for him at heavyweight. He is 6'4'' and sports the previously mentioned 84.5 inch reach. We'll look at each measurement in detail:

240-pounds: You may be surprised to learn that "old school" heavyweights like Antonio Rodrigo Nogueira (239-pounds), Mirko Filipovic (220-pounds) and even Roy Nelson (246-pounds) have no advantage over Jones. Even the chiseled Cheick Kongo (235-pounds) can't compare on the scales.

6'4'' Height: Of 31 fighters currently on the UFC heavyweight roster, only eight would be looking down on Jones at the weigh-ins. Four of those only have an extra inch on him, being listed at 6'5''. The last heavyweight champ taller than "Bones" was none other than the affable Tim Sylvia.

84.5 inch reach: We already know he has the longest reach in the UFC, but it may surprise you to know that other heavyweight monsters like Brendan Schaub (79.5 inch), Ben Rothwell (80 inch) and Gabriel Gonzaga (76 inch) come in with a sizable disadvantage here.

So that raises the question of who is close enough on paper to negate the genetic gifts of Jonny "Bones" Jones? Here's my list:

Found something entertaining, brutal, or bizarre you'd like to see in the Morning Report? Just send it to @shaunalshatti and we'll include it in Monday's post.