Unlike in some other categories in 2012, there was no lack of solid candidates for Knockout of the Year.

Picking one over another is often a matter of taste. Sheer spectacularity counts for something. Making a highly complex knockout look easy is another way to stand out. Knockouts which cement a fighter as a legit contender also rank high. The stakes and the quality of opposition matter, too.

When push comes to shove, we're going with Le-Franklin over Barboza-Etim simply because it was such an unexpected, shocking moment.

The 40-year-old Le was an underdog coming into the fight, and he came into the bout with a foot injury.

Franklin, meanwhile, was coming off a fight in which he manhandled Wanderlei Silva on short notice, and we're still not too far removed from the memories of Franklin brutally knocking Chuck Liddell into retirement in 2010.

So when Le wound up with a big right hand and put out Franklin's lights, it was a moment as unexpected as it was jarring. Like Rashad Evans' knockout of Liddell or Gabriel Gonzaga's head-kick finish of Mirko Cro Cop, it was the sort of finish which will live on for years as an iconic moment in the sport. And that's enough to give it the edge for first place.

Before we get to the list, a quick reminder that this is specifically for knockouts and not TKOs. So, for example, while Anderson Silva's knee to Chael Sonnen's chest was one of the year's most memorable strikes, their UFC 148 fight was stopped due to punches after the knee, so the fight isn't eligible.

2. Edson Barboza vs. Terry Etim, UFC 142, Rio de Janeiro, Jan. 14 A perfectly executed spinning-heel kick knocked Etim cold. Anytime someone pulls off a move that in theory should only work in the movies, you've earned a spot high on the list. 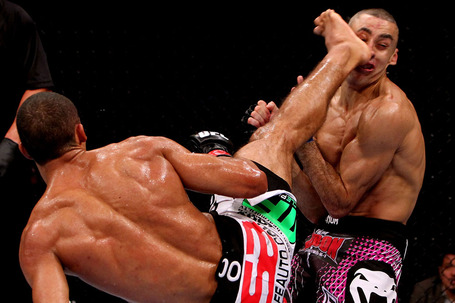 4. Anthony Johnson vs. D.J. Linderman, World Series of Fighting, Las Vegas, Nov. 3 In what may have been 2012's most visceral knockout, Johnson, angered that referee Herb Dean didn't call timeout after an eye poke, unleashed a brutal right hand to the jaw which caused Linderman to fall straight forward to the mat.

5. Jose Aldo Jr. vs. Chad Mendes, UFC 142, Rio de Janeiro, Jan. 14 Aldo's knockout knee of Mendes in their featherweight title bout was a thing of efficient beauty. There was no running start, no big windup, no histrionics. Mendes had Aldo clinched from behind in the closing seconds of the opening round. In seemingly one motion, Aldo escaped, turned around, and flattened Mendes one second before the horn. It might not have been as flashy as Barboza's finish or as stunning as Le's, but it served as a reminder of the scope of Aldo's striking capabilities.