With his near-flawless victory over Nate Diaz in the main event of the Dec. 8 UFC on FOX 5 card, Benson Henderson cemented his spot atop the lightweight rankings once and for all. He's won six straight fights, 16 of 17, Frankie Edgar is no longer in the division, and that's that.

But Edgar was just one of two 155-pound mainstays to depart the division, the other being Clay Guida. Both are going to make their way at featherweight going forward.

And that made for interesting results in the new SB Nation consensus lightweight top 10. Nine of the top 10 appeared on all six ballots. Henderson claimed all six No. 1 spots for 60 points. Gray Maynard, who's on the sidelines with a knee injury, took four of six second-place votes and a pair of thirds, which was enough for him to claim second place with 52 points. Strikeforce champion Gilbert Melendez picked up the other two second-place votes, which helped push him into third with 46. Diaz didn't fall far after his loss to Henderson, taking fourth with 41 points.

The next two spots go to fighters who who will square off in a much-anticipated showdown on Jan. 26. Former WEC champion Anthony Pettis took fifth place with 35 points and his opponent, Donald Cerrone, took sixth with 31.

Respected vet Jim Miller (22 points), Bellator champ Michael Chandler (21), and the man he beat for the title, Eddie Alvarez (11), claimed seventh, eighth, and ninth, respectively. Joe Lauzon, who faces Miller at UFC 155, appeared on three ballots, which was good enough to give the Bostonian the final spot with eight points. 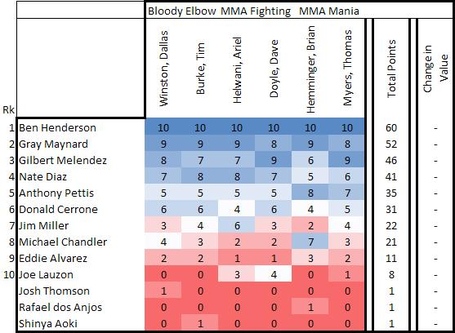 (Scoring: Fighters are given 10 points for a first-place vote, nine points for a second, etc., down to one point for 10th place. The results are then tallied up and presented here. Official SB Nation rankings policy: Fighters under commission suspension are ineligible to be ranked during the duration of their suspension or if they have licensing issues, although this does not presently affect any fighters who would generally be considered top 10 at lightweight).