The question coming out of UFC 154, at least as it pertained to pound-for-pound top 10 rankings: Would Georges St-Pierre's win over Carlos Condit shake up the top three?

When St-Pierre defeated Jake Shields on April 30, 2011, he was generally ranked No. 2 behind Anderson Silva in most polls, with newly crowned UFC light heavyweight champion Jon Jones generally slotted somewhere between three and five.

But while the welterweight champ was out, Jones went on an unprecedented tear, as his title win over Mauricio Rua was the first of five in a row over men who had held the UFC's 205-pound title. With that, Jones shot up to No. 2, nudging St-Pierre down to No. 3.

Afterward? While GSP's win over Condit was memorable, it wasn't enough to reclaim second place. With Silva the unanimous pick for No. 1 atop the SBNation pound-for-pound MMA poll, Jones claimed four second-place votes and two thirds to stay at No. 2 with 52 points. St-Pierre got two second-place votes, one third, and a fifth-place vote to finish in third with 48 points.

There were consensus picks at fourth and fifth, as UFC featherweight champion Jose Aldo Jr. took five of six fourth-place votes to finish in that spot and dos Santos four of six fifths. UFC lightweight Benson Henderson was sixth.

Rounding out the top 10 are in order, are Dominick Cruz, Frankie Edgar, Dan Henderson, and Demetrious Johnson. 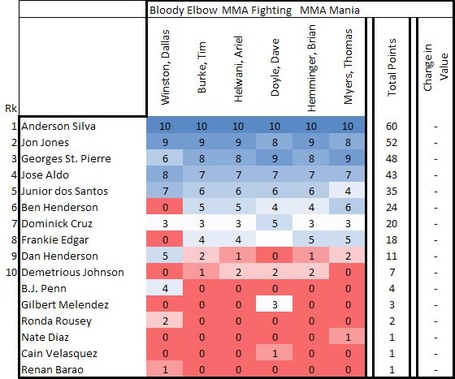 1. Anderson Silva (33-4, 60 points): With Chris Weidman out of UFC 155, Silva now seems to be looking at either GSP or the winner of Michael Bisping vs. Vitor Belfort next.

2. Jon Jones (17-1, 52 points): April fight with Chael Sonnen will be a big-money fight. It will also be one with far more downside than upside for Jones' pound-for-pound position.

5. Junior dos Santos (15-1, 35 points): Dos Santos hasn't showed off the all-around skillset of the fighters ahead of him on this list. Then again, he also hasn't had to.

8. Frankie Edgar (14-3-1, 18 points): Edgar has his chance for an immediate title shot in the weight class many felt he belonged in all along.

9. Dan Henderson (29-8, 11 points): Hasn't fought in more than a year, since he had a knee injury you just might have heard about. UFC 157 bout with Lyoto Machida will show whether that's too much of a hurdle to overcome at his age.