Another lazy spring afternoon passes and we're again left to make our own fun until the MMA schedule picks back up. So while we wait, let's use the contrast of yesterday's and today's odd Japanese game show clips to kickstart a little discussion.

Ronda Rousey is unquestionably the queen bee of women's mixed martial arts right now. Her next test will likely be Sarah Kaufman -- a relentless Canadian who poses her own problems -- but for the sake of argument, let's say "Rowdy" does what she does and finishes Kaufman in the first round via armbar, and then offs one more opponent in the same fashion. Around that time, the exiled former queen bee, Cris "Cyborg" Santos, would likely be priming for her return, and she has already made it very clear she intends to cut down to 135 pounds and smash Rousey's face in. Santos, of course, has violently ruled the WMMA throne since 2009, though now that reign is plagued with doubt because of her positive steroid test.

Given the dearth of depth in the women's divisions, it isn't that crazy to think "Cyborg" would be immediately thrown into a promoter's dream title fight against Rousey. So what do you think, readers? Would "Cyborg" return with a vengeance and crush the champ? Or would the rowdy one run through a PED-less Santos? Let us know in the comments below.

Cesar Gracie not going to let Nick Diaz quit MMA. The person closest to Nick Diaz, his brother Nate, believes his abrupt retirement is for real. Diaz's trainer Cesar Gracie, however, isn't about to watch that happen.

Silva-Sonnen II confirmed for UFC 147. MMA's biggest rematch is finally on the books for UFC 147, as Chael Sonnen will take on Anderson Silva at the 47,000-seat Estádio Olímpico João Havelange in Rio de Janeiro, Brazil on June 23, 2012.

Check out the sequel to yesterday's Battle of the Sexes between Cyborg Santos and a Japanese man. This time the champ herself, Ronda Rousey, ups the ante by taking on three Japanese men in a clip from the same bizarre game show. (Big thanks to @pegson for the tip.)

Has there ever been a UFC commercial that prominently featuring an English-speaking Anderson Silva? Maybe that's why this UFC on FOX promo seems a tad weird. (HT: MMA Mania)

Mark Matheny is known as one of the better refs in MMA, so you'd figure he has reasonably good judgment. But after watching what he does in his spare time, that dream has been thoroughly crushed.

Bloody Elbow's Anton Tabuena brought this to our attention and it felt criminal not to share. Fresh from a loss to Johny Hendricks, Jon Fitch set out on a beard conquest of sizable proportions. Several weeks later he showed off the progress via Twitter, and it was impressive: 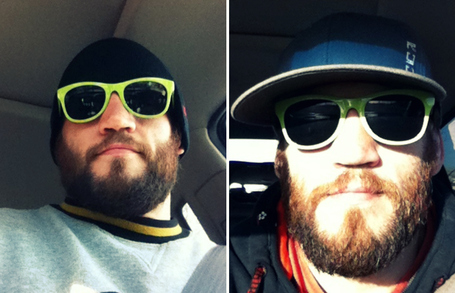 But springtime is coming, so earlier this week Fitch stepped up his facial hair game dramatically, shaving down the all-arounder into a legendary 'stache that would make Sam Elliot proud. Well done, sir. Well done. 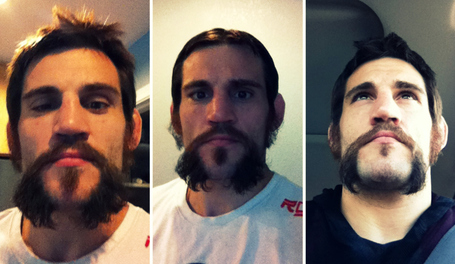 How I make extra money in Montreal. #hustle t.co/qoDZ3YNl

Today's Fanpost of the Day is compilation of Don Frye magic from MMA Mania's (shonuff): Don Frye 2012: Predator for President?

Recently there's been a lot of talk by the MMA media christening Chael Sonnen as the best talker in MMA history. But have they lost their historical perspective? Perhaps they have forgotten the hilarious off-the-cuff rants of former UFC Heavyweight Champ and perennial patriotic tough guy, Don "The Predator" Frye, possessor of not only the craziest fight in MMA History (vs Takayama) but also the most outrageous comments.

Personally, I think he should throw his hat into the Republican Primary race. Not only would he add spice to the campaign trail, we'd finally have a candidate in this race who says what he really thinks (and then some). Here are a few gems that would make wonderful soundbites on CNN.

On improvising new techniques in MMA:

"I been studying Buddhism. I'm learnin' to levitate. I'm gonna levitate off the ground about a foot so he can't get that kneebar on me. So when he goes down to the ground, I'll be up here. Then I'll swing round and kick him in the head. Can't miss that head. Thing's gotta be about that big, like a 5-gallon bucket, a 5-gallon bucket full of buttholes. Yeck!"

"You gotta excuse me, my stomach's upset. I had the Tim Sylvia breakfast special, ham & eggs and a can of tomatoes."