A one-way trip from Monroe, Conn. to Springfield, Mass. is about 90 miles, enough distance and time to allow any active mind to wander. On the long stretch, new thoughts often seep in and take hold, whether attainable or on the edges of imagination. But that's only when reality isn't interfering. In the dead of winter, the ride seems too cold and unforgiving to routinely make, while in the summer, there are plenty of other things that can convince you to stay home. But this is what Nick Newell chooses. This is his work commute.

As metaphors go, Newell's home gym, Fighting Arts Academy, seems to have been designed for literary use. It sits with its back to the rails of the old Boston & Albany freight line, on a street named "Verge," that is mostly comprised of commercial businesses, some open, some shuttered. Cargo trains occasionally roar by, shaking the ground while somehow not interrupting anything around. In the middle of this blue-collar neighborhood is a place where aspiring fighters strive to move past the bounds of normal, and Newell is, so far, its greatest export.

Everyone, everything is going somewhere. Which takes us back to the ride.

Newell has eaten up miles, thousands of them over the last few years. While friends have been on vacation, while they have married and started families, he drives. The end point is a 7,000 square foot gym that you can easily imagine to be a former warehouse in a past life. But the destination lies so much further.

Like many young mixed martial arts all around the world, Newell wants to fight for the biggest promotion in the world, the UFC. His record suggests he may be nearing that goal. After his last fight, Newell is a perfect 7-0. On August 3, he fights David Mays at XFC 19 with the hope of making it eight in a row.

Recent history suggests that a streak like that rarely goes unnoticed by the UFC's talent gurus. At UFC on FUEL 4, welterweight Marcelo Guimaraes made his debut with a 7-0-1 record. At UFC 149, bantamweight Mitch Gagnon was invited into the promotion with an 8-1 mark. At the upcoming UFC on FOX 4, light heavyweight Wagner Prado makes his debut at 8-0. Some fighters require more seasoning, and others are ready even sooner, but eight straight won't go overlooked.

"All I want is the chance, because I know that I'm going to shine," he said. "Put me in. If I lose, you can say, 'People said he should fight, and he lost.'"
Newell mostly talks around the edges of the subject, because he knows it is a sensitive topic. Say too much and people think you're full of yourself. Stay quiet and risk going unnoticed.

But he also can't ignore the obvious. There is a wrinkle in Newell's story, because if he were just a 7-0 fighter looking to continue a streak, there would be no doubt the UFC would be looking at him, there would be no possibility of him going overlooked. But that's not a problem for Newell. Especially in MMA. It's hard to miss the one-handed fighter beating up the guys in front of him. 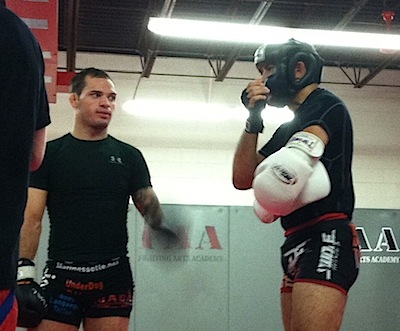 Yes, Newell has one hand. Born with congenital amputation, his left arm stops just inches below the elbow. So going unnoticed has never been an issue for him.

These days, Newell freely admits that he likes the attention. It hasn't always been that way. He remembers going 8-22 as a high school freshman wrestler, with six of his wins coming by forfeit. In that trying year, he was pinned something like 17 times. His mind doesn't allow him to remember the exact number, and he doesn't care to find out for sure. Either way, it was certainly embarrassing, but the struggles and doubts drove him. By the time he graduated from Jonathan Law High School, he'd won 123 matches -- including 53 in his senior year -- and been named All-State.

So Newell has persevered through adversity before, done it his whole life really. But this? This is different. This is a situation out of his control. He can't win a competition that lets him into the UFC. He has to be invited. Given the fact that he was born with only one hand, he is hardly another 7-0 fighter on the cusp of a dream. Now, the fighter acknowledges, there are politics involved.

To get to where he wants to go, Newell isn't just fighting opponents, he's fighting perceptions of what disabled people can and cannot do.

Himself? He has no doubts. Newell recently traveled to Coconut Creek, Fla. and trained with the athletes of vaunted fight stable American Top Team. For this training camp, he also spent some time at New Jersey's highly regarded AMA Fight Club, home to noted lightweight fighters like Jim MIller and Khabib Nurmagomedov. He's assessed himself against those who have already walked into and won inside the octagon.

Of course he's going to say that. What else would he say? But what about a more detached opinion? AMA's head trainer Mike Constantino, who has helped send numerous fighters to the UFC, walked out of his brief interaction with Newell as a believer.

"It's always hard to say someone's ready when you're talking about the highest level in the world, but Nick did a great job in my room," he said. "If you want to gauge how he did, I put him against certain people and it was obvious that he's an amazing athlete.

"Look," he continued, "anytime anyone asks me what I look for in a fighter, I always say heart. It's always No. 1. There are a ton of fighters with amazing skill who don't have the heart. The other big things are cardio and work ethic, two things that are instilled in you at a young age. He already has those key attributes along with great skill, so I would say, absolutely, he can definitely go straight to the top."

His last fight certainly illustrated his courage. Facing Chris Coggins, who was then 5-1 with three submission victories, Newell found himself trapped in a rear-naked choke twice in the second round. The second time looked dire, with Coggins getting his hooks in and getting his choking arm under Newell's chin. By all accounts, Newell's unbeaten streak looked to be over. He says now that he felt like he was in the choke for an hour. That he saw black for a split-second. That a million thoughts ran through his head, but none of them were about tapping.

"I was stuck, but if things don't go your way at work, you don't just quit your job," he said. "I just told myself, 'Don't quit.' The worst thing that happens is that you pass out. But you can also escape. He can get tired or he can let go."

Instead of fighting Coggins' grip, Newell slowly worked to angle his back to the mat. That gave him just enough space to keep the blood flowing to his brain, and Coggins finally released the hold after 26 agonizing seconds. The fight was in Tennessee, Coggins' home state, but upon the escape, the crowd exploded, suddenly shifting allegiance to Newell, who went on to take the third round and earn a decision.

After six straight wins by finish, Newell had proven that he could grind out a victory by any means necessary.

"He's one of the toughest guys, he has one of the biggest hearts of anyone who's ever been in the cage, ever," said his trainer Jeremy Libiszewski.

That seems to be the sentiment around him. Newell has an extended support team anchored by his mom Stacey that fuels his success. But it's not just those with everyday contact that he's at least symbolically fighting for. There are the children he hears from that are learning to go through life with the same disability. There is his late friend Abi Mestre, a pro fighter who died in a motorcycle crash just two fights into a promising career. He carries it all with him.

Libiszewski has seen it all first hand, living the dream right along with Newell from the beginning. It was his gym that Newell first walked into after seeing the UFC for the first time while in school at nearby Western New England College. Years later, Newell considers Libiszewski to be a second father. Newell often sleeps in his home, eats his food, and listens to his advice.

Despite the commute, many days, Newell is the first one to arrive for pro class. Most days he is the last to leave. The extra work has allowed him to make jumps in his performance and find ways to adjust for his disability. Newell concedes that you're not going to see him throwing K-1 level combinations, but says his timing, power and awkward style make him a difficult matchup.

So far, that's proven true for Newell, but he knows he has to keep on winning. He can't afford to lose and offer the UFC an easy way out of making a decision. By winning, he can offer indisputable proof that he's worth a gamble. Or rather, that he's no gamble at all.

Newell is emboldened by his recent brush with the promotion. In 2011, he tried out for the 14th season of The Ultimate Fighter. He passed the grappling and striking portions. He aced the interview. He was flown out to Las Vegas for one last look. But then? Nothing. As it turned out, while Newell -- a natural lightweight -- had been trying out for a planned 170-pound class, that season of TUF ultimately settled on bantamweights and featherweights.

To get to the UFC, Newell says he will make 145. He'll fight on short notice. And mostly, he'll keep winning until he can no longer be denied.

"I have this weird, undying belief in myself and I think it’s carried me pretty far," he said. "No matter who I go against or what I do, I try to approach it from an intelligent standpoint. I’m not delusional. Without a doubt in my mind, I can beat a lot of guys there right now."

He has thought a lot about it. His solitary rides have offered him perspective and clarity. His experiences have offered context. And his success has offered promise. After all this time, the dream no longer seems so far-fetched. A one-handed UFC fighter? A few years ago? Impossible. But now? Maybe. Somewhere, someone important is watching, and in a just world, the rest will be up to him. How do you complete an impossible journey? No matter what, you just keep driving.