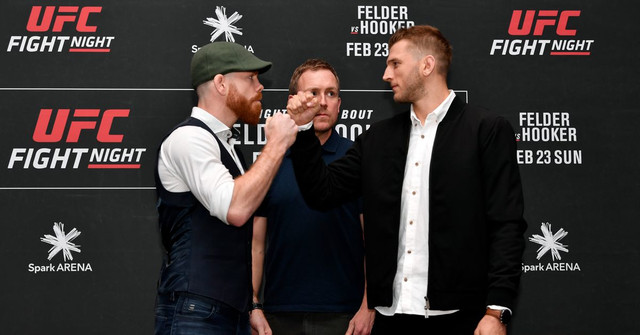 Paul Felder and Dan Hooker take to the octagon to determine who has what it takes to be the best in the ring in an upcoming UFC match that has fans talking. While the two initially had no beef, it seems that’s changed since the meetup at Auckland. Now, both guys are dead set on taking out their opponent and earning the UFC belt and glory. What could happen during this exciting match? It is the question on the minds of every UFC fan right now!

Hooker has lost only two of 19 professional MMA fights, bringing home finishes in five out of his last six wins. He’s also ranked #6 in the 155-lb. division, although Felder holds rank at #7 in the division. Felder has a 17-4 record, which is equally impressive. Both men are mean, aggressive, and hit hard. They both are eager and they can take a hit just as well as they can land it.

And, it seems that it’s also Felder who took the staredown in Auckland personal. He’s vowed in numerous media outlets, to take Hooker down. The Hangman, being just as witty and determined as Felder, didn’t respond kindly to the news. It is reported that Hooker noted Felder "crossed the line" with his statements.

Who Will Win? Will There Be a Knock Out?

The biggest advantage Felder gains against Hooker is the fight location. Taking place February 22 in Auckland, the UFC match up will be held in front of his friends and family. We, our most loved people, are present and we want to do our best. The advantage of the added support always helps a fighter. Hooker plans to ‘knock out Felder in the first round’ as his friends and family watch from the crowd.

Felder understands that won’t be easy, considering his fight history, but isn't worried about getting that knockout. Both men come to the fight with complete confidence and the power to knock the other out. The biggest disadvantage for Hooker is that he’s never gone the full distance in a fight, so if the match goes past the 3rd or 4th round, he may very well lose his stamina and any advantage over Felder.

If you placed a bet on the Hooker vs. Felder fight or plan to do so very soon on the sbobet website, you likely have high interest in what to expect at this match. But, the truth is, the fight can really go to either man. Both have the power, the strength, the aggression and the determination to come out as a winner. What we do know is that it's a match that any MMA fan cannot miss.

Anything can happen in this match. While both brawlers promised a great fight, now that there is bad blood between the two, there’s no question it’s gonna be non-stop, adrenaline-packed action from the second the referee announces "Let’s get it on!"