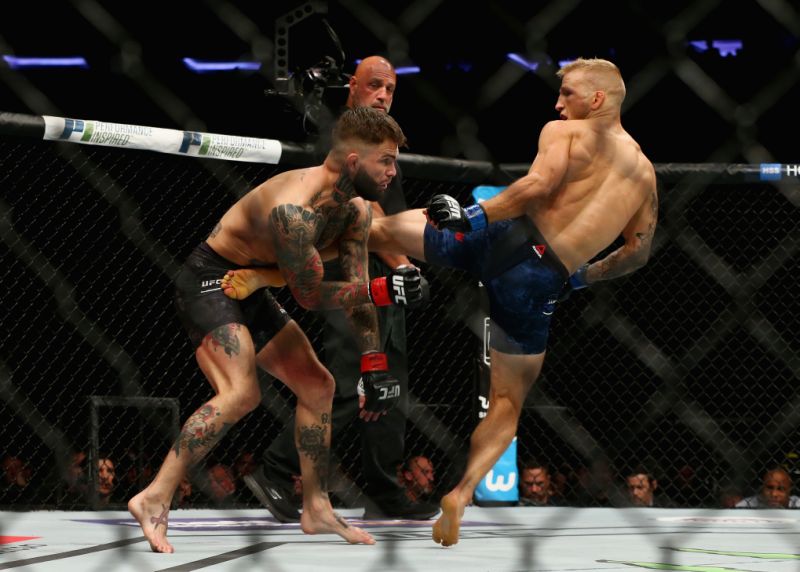 MMA can be a somewhat intimidating sport for new fans to dive into. With 11 divisions, an irregular event schedule, and a relative lack of mainstream coverage, the barrier of entry may seem high for aspiring enthusiasts. This post is by no means a comprehensive guide to the sport, nor is it a collection of the most essential "greatest fights of all time." Instead of overwhelming new fans with an exhaustive list of great historical fights or MMA styles, I simply hope to offer a handful of fights to pique curiosity and make potential new fans say "that is cool, I'd like to see more like that." I aimed to choose fights that are recent enough to be "relevant," and exciting enough to be entertaining even without much context. If you enjoy them, you may wish to seek out more fights featuring the same fighters (perhaps on the UFC's fight library Fight Pass service), or just jump in and check out the next MMA event coming up on TV.

So without further pontification, I would like to recommend five recent UFC fights that aspiring MMA fans should watch:

Eddie Alvarez vs. Justin Gaethje, UFC 218, Lightweight (155 lb's) - Eddie Alvarez aka "the Underground King" is a wild brawler who boasted a 25-3 record and multiple minor league titles before even coming to UFC. He eventually won the UFC championship, but lost it to Conor McGregor. Two fights later, Eddie is tested by a man with a similar reputation - Justin Gaethje is an even wilder brawler than Eddie, and himself is undefeated and a former minor league champ going into this bout. Eddie and Justin finally met in a UFC cage in a fight that the fighters said would determine who could hold the crown as the "King of Violence." The fight lives up to the hype.

Cub Swanson vs. Brian Ortega, UFC Fight Night Fresno, Featherweight (145) - Going into this fight, Killer Cub is riding a 4-fight win-streak including back-to-back Fight of the Night performances (UFC awards fighters with $50,000 bonuses for the best fights and performances at each event). In fact, Cub hasn't lost since suffering back-to-back L's to champ Max Holloway and #1 contender Frankie Edgar, so if Cub wins this fight the wily veteran is right back in the title picture. But Brian Ortega is an undefeated rising star and submission master, who himself is coming off a Fight of the Night performance bonus. With the winner of this fight in line for a title shot, I don't think it's too much of a spoiler to tell you that this won "Fight of the Night" as well.

TJ Dillashaw vs. Cody Garbrandt, UFC 217, Bantamweight (135) - Rivalries don't get much more personal, nor more heated than TJ vs. Cody. This one is pretty much out of a movie - they were training partners and friends at Team Alpha Male ("TAM") gym, and TJ became the champion, but left the gym when TAM fired head coach Bang Ludwig. It all went downhill from there - TJ was called a "snake" by his former teammates, accused of using PEDs, and was even attacked by Cody while filming a TV show. Meanwhile, TJ lost the title in a close fight, and Cody went on to capture it. At UFC 217 the heated rivalry finally consummated in a fight, in which undefeated KO artist Cody Garbrandt hopes to shut TJ's lights and defend the title, while TJ hopes to finally shut his former teammates' mouths and win his belt back.
Francis Ngannou vs. Alistair Overeem, UFC 218, Heavyweight - Coming into this fight, Ngannou is a "new beast" in a Heavyweight division chock full of "old men." Indeed, Ngannou had finished all of his UFC fights, but some wondered if he was just pure size/strength, lacking in skill/technique. Who better to test him than the veteran kickboxing expert Alistair Oveereem? Reem is one of the best technical strikers in the sport, himself coming into this bout riding a 2-fight winning streak after suffering a loss in a title fight with Stipe Miocic. Would Ngannou prove himself one of the elites, or would he get out-classed by a much more experienced opponent? That question would be answered in spectacular fashion in this bout.
Robert Whittaker vs. Yoel Romero, UFC 213, Middleweight (185) - While Michael Bisping was technically Middleweight champion, Bisping somehow managed to fight twice as champion without facing a ranked opponent (typically champions face the #1 ranked contender, and so on). Meanwhile Whittaker and Yoelito took care of the Champion's job and dispatched of all other ranked opponents, leaving themselves as the top two men standing in a killer division. This fight was made for the Interim title, but most fans (and fighters) felt it would determine the "real" champion -- and in fact, a few months after this fight the "other" title was vacated and the winner was named the real champion. They are booked in a rematch this June, and if that fight is as closely contested as this one we will be in for another treat.