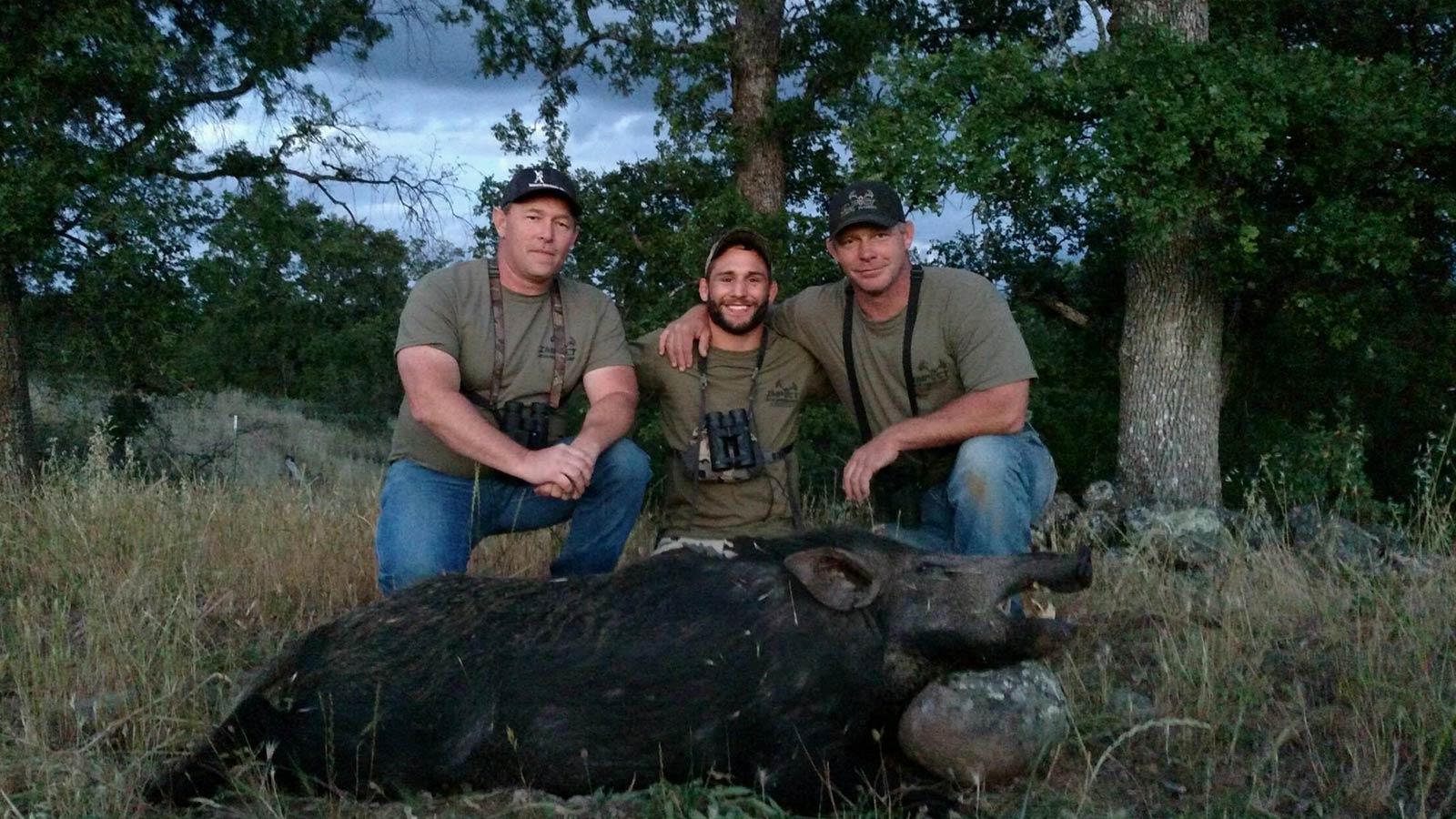 It’s not unusual to see a professional mixed martial artist go into business for themself outside of the octagon. Several athletes have released biographies, some have opened restaurants, and many are paid to make appearances.

Chad Mendes is currently operating a hunting guide business by the name of "Finz and Featherz."

With Finz and Featherz, fans can embark on hunting and fishing trips with celebrities. From California to New Zealand, Finz and Featherz provides fans with expert guides, access to celebrities who share an affinity for the great outdoors, and an unforgettable wilderness experience.

Available celebrities include but aren’t limited to: Chad Mendes, Urijah Faber, TJ Dillashaw, Paige Vanzant, Scott Jorgenson, Travis Browne, Michael Chandler, and Clay Guida. Although he is not listed on the "Celebrity Tours" category on their website, Cody Garbrandt was recently listed on a two-day-celebrity-tour with a $1000 price tag.

My girlfriend and I decided to go to www.finzandfeatherz.com and place an order for some jerky. I purchased all four flavors of jerky. Each four-ounce bag was $10.99, and shipping was roughly $35.

I live in Alaska so I am accustomed to expensive shipping prices. I only make mention of that, because shipping will likely be cheaper for anybody living in the continental United States.

My girlfriend and I reviewed each flavor:

Ryan - Light and sweet flavor. It tastes more like honey than teriyaki to me. It’s surprisingly pretty tasty.

Alicia - Very mild sweetness. I wanted it to have more flavor but I didn’t dislike it. It was still good.

Ryan - Love the flavor with this one. I’ve found that a lot of the sriracha-flavored items are typically far too spicy to be enjoyable. I love sriracha, but a lot of people haven’t mastered using it in flavoring their products--Finz and Featherz has. For somebody who is selling beef jerky as a secondary source of income, Chad sure does know how to make it taste right.

Alicia - I thought it was going to be a lot spicier. The "tang" created a perfect balance.

Ryan – I second her thoughts on the tanginess. Excellent point.

Ryan – I’m starting to realize that all of the Primal Jerky flavors share one common trait. They all have a fantastic aftertaste. Teriyaki was the flavor that I was the least excited to try. This is only because I’ve had teriyaki beef jerky in the past. This isn’t anything new. Primal Jerky Teriyaki tastes nothing like the teriyaki flavors I’ve had in the past.

Alicia – I wish this one had more flavor. I enjoy the after-taste but it could use more teriyaki flavor.

Ryan - Terrific flavor. My complaint about beef jerky has always been that it’s too dry. This jerky has such a terrific flavor that your mouth waters excessively when you eat it, rendering the jerky succulent! I am impressed. By far, this is my favorite flavor

Alicia - I like how it wasn’t overpowering. It tasted great and the after taste was quite flavorful.

I recommend giving this beef jerky a try. Admittedly, I ordered some with the intent of giving a fighter some business. My presumption was that it would be much-needed. After realizing that the jerky was delicious, I subsequently witnessed Chad publicly requesting applications for a jerky processing job. As it turns out, he needed to hire people, because he was having trouble keeping up with the orders being placed.

It’s nice to see fighters utilizing their abilities outside of the cage to create a means for revenue. If you are interested, here is a photograph of the jerky that I purchased from Finz and Feathers: https://twitter.com/ryanhobbs723/status/856086439829716992

I try to support MMA fighters side-businesses as best as I can. I’ve been half-tempted to purchase the "Shamrock-Slam" from Ken Shamrock's website. (If you haven’t heard of it, Google it right away. There’s a website and you won’t be disappointed with its content: http://www.kenshamrock.com/shamrock-slam.html )

What says you, fight fans? Share your experience with products from the MMA community in the comments section below!