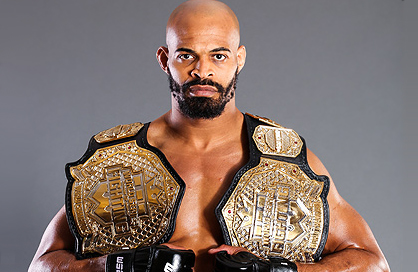 For reasons that remain unclear, multiple World Series of Fighting (WSOF) champions have recently entered free agency. The UFC has capitalized on this bizarre occurrence by signing bantamweight champion Marlon Moraes, lightweight champion Justin Gaethje, and two-division champion (light-heavyweight and middleweight) David Branch. The first of the three champions stepping into the octagon will be David Branch at 185 lbs.

Since being cut from the UFC back in 2011, David Branch has been hard at work. He has fought a number of MMA veterans including, but not limited to, Paulo Filho, Anthony Johnson, Vinny Magalhaes, Jesse Taylor, and Yushin Okami. Branch competed in several promotions before he ultimately settled with WSOF. While competing for WSOF, Branch won and defended both the middleweight and light heavyweight belts. He defended the middleweight belt three times, and he defended the light-heavyweight belt once. Since he is leaving the promotion without having lost either belt, I say he keeps the label of "champion" in perpetuity. But just to be clear, he has officially been stripped of both titles.

While building a named for himself, Branch has amassed a 19-3 record. His most glaring loss on that record would have to be his slam KO loss against Gerald Harris back in 2010. It was a devastating finish, and it lit up the highlight reels for quite a while. This was not the kind of loss that a fighter will casually shrug off. It was violent, embarrassing, and probably scary in hindsight. Surprisingly, he rebounded from that loss with two decision victories. He then fought against Rousimar Palhares and lost via (you guessed it) kneebar in the second round. With a 2-2 record in the UFC, the promotion decided to send Branch his walking papers.

I’ve seen fighters released for less, and I’ve also witnessed fighters stick around after worse, but strictly looking at the facts, the UFC might’ve pulled the trigger a little quickly on releasing Branch. However, seeing how young Branch was in his career, I think his time away from the UFC was beneficial. His time in WSOF provided him with a valuable opportunity to develop against reasonable levels of competition. He fought larger opponents at 205, he fought top middleweights at 185, and he gained experience going five full rounds. His only loss outside of the UFC was a decision loss against Anthony Johnson at 195 lbs. Going the distance with Anthony Johnson is a moral victory in my book. I wouldn’t pick any middleweight against the guy.

Due to the cancellation of Henry Cejudo vs Sergio Pettis, David Branch now finds himself on the Pay-Per-View portion of the UFC 211 broadcast. Welcoming him back into the octagon will be rising middleweight, Krzysztof Jotko. Jotko has a 19-1 record with seven of those fights being in the UFC. He’s currently riding a five-fight win streak with his most recent win being a unanimous decision over former title challenger, Thales Leites.

Like many fighters transitioning into the UFC from another promotion, David Branch has fallen under the radar in his return. But in all fairness, he’s competing on a highly-stacked UFC Pay-Per-View.

Regardless of that fact, I’d like to remind everybody of the expectation that was set for athletes coming over to the UFC from WEC or Strikeforce. Many expected these athletes to be fun additions, but had written them off as competitors who would ultimately be swallowed by the more superior promotion. Daniel Cormier, Robbie Lawler, Ben Henderson, Fabricio Werdum, Anthony Pettis, and Luke Rockhold would all beg to differ. The aforementioned fighters believed that they could become champions--so too does David Branch.