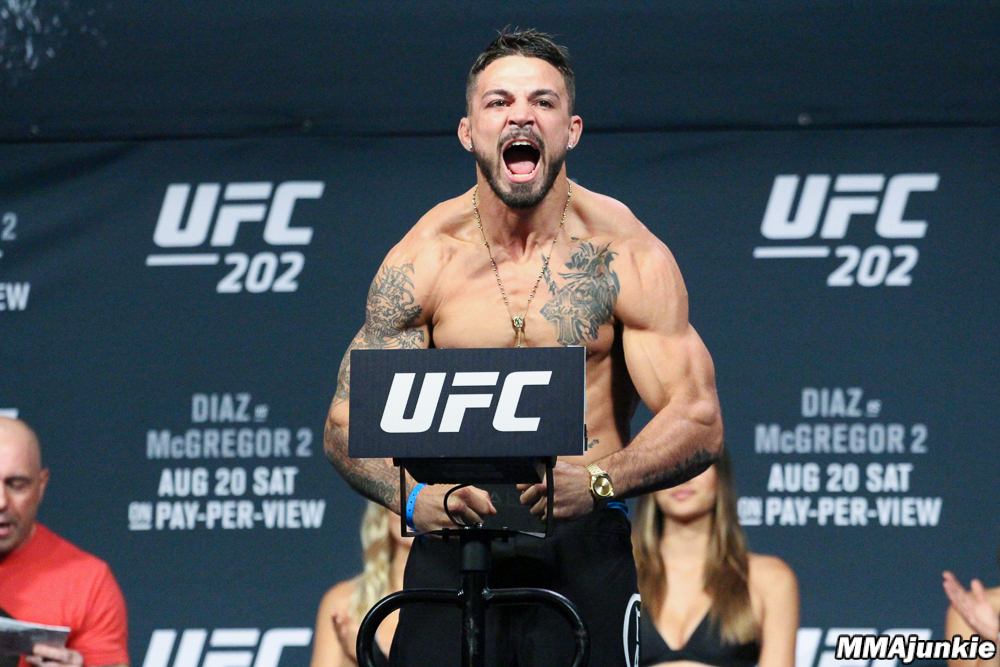 When Mike Perry was asked about his nickname "Platinum," he told Ariel Helwani that he wanted to be like 'Iron' Mike Tyson "but with twice the skills." In a sport where many competitors are hesitant to call out their next opponent, Mike Perry stands out as somebody who is willing to challenge everybody.

Before most of the fans knew who he was, Mike called out Colby Covington, Robbie Lawler, Johny Hendricks, Stephen Thompson, Lorenz Larkin, Rory MacDonald, Michael "Venom" Page, and Neil Magny. In the case of Magny, he actually said he wouldn’t fight him due to Magny’s loss against Larkin that night.

In his UFC debut at UFC 202, Mike’s behavior provided headlines before, during, and after the fight. From his words on the microphone, to his exciting fighting style, Mike "Platinum" Perry became an immediate character in the sport of MMA.

My first introduction to "Platinum" was at the UFC 202 weigh-ins. During his stare-down with Hyun Gyu Lim, he faked out Lim with a handshake, jumped into a fighting stance, and proceeded to let out a war-cry without breaking eye contact. The much-larger Lim was wearing sunglasses, didn’t flinch, and was smirking at Perry. Lim exuded confidence whereas Perry seemed unstable. I originally thought that perhaps "Platinum" was nervous. Afterall, this was his UFC debut, and UFC 202 drew a massive crowd for weigh-ins. But after re-watching the footage, and seeing him high-five the octagon girls prior to the stare-down, I was no longer under that impression.

I fully expected Hyun Gyu Lim to win the fight. His only losses in the UFC were against Neil Magny and Tarec Saffiedine; both of which are top 15 welterweights. Little did I know; Mike Perry was making his UFC debut while riding a seven-fight win streak. Even more impressive was the fact that each victory was via KO or TKO—five of the seven were stopped in the first round. Even if I had known that, I would have still leaned towards Lim. He showed tremendous heart and determination in his five-round war against a talented striker in Saffedine. He was also noticeably larger than Perry. None of that mattered on fight night. Mike Perry TKO’d Lim three minutes and thirty-eight seconds into the first round. "Platinum" had arrived.

If the commentary from some of his earlier fights on the regional scene are of any indication, Mike Perry has been a trash-talker for his entire professional MMA career. You’re Welcome, with Chael Sonnen cohost, Joel Suprenant has described Perry as a "young Phil Baroni." In a pre-UFC documentary, Mike is quoted as saying "[I] got no respect for nobody." Judging by the nature of his call-outs, I would tend to believe that. In the end, they’re all the same in Perry’s eyes. "Cut another check, break another neck."

On April 22nd, at UFC Fight Night 108, Perry will be fighting in what I believe to be his toughest match-up yet, against Jake Ellenberger.

"Platinum" has a violent fighting style reinforced with devastating knockout power. His forearms are fittingly tattooed with the words "Relentless Warrior." Although that reckless style worked to his detriment in his last fight against Alan Jouban, it has the makings to concoct a thriller against a bomber like Jake Ellenberger.

I’m not sure who will come out the victor in this fight, but to me, Mike "Platinum" Perry has become must-see TV.

If you throw that kind of fighter in the cage with Jake Ellenberger, you can expect chaos.

Update: Mike Perry defeated Jake Ellenberger via KO (standing elbow) at 1:05 of the 2nd round. The victory is likely an early candidate for knockout of the year, and marks Perry's first win over a top 15 opponent. Seeing as Ellenberger was ranked number 13, one could argue that Mike "Platinum" Perry is now a top 15 UFC welterweight.