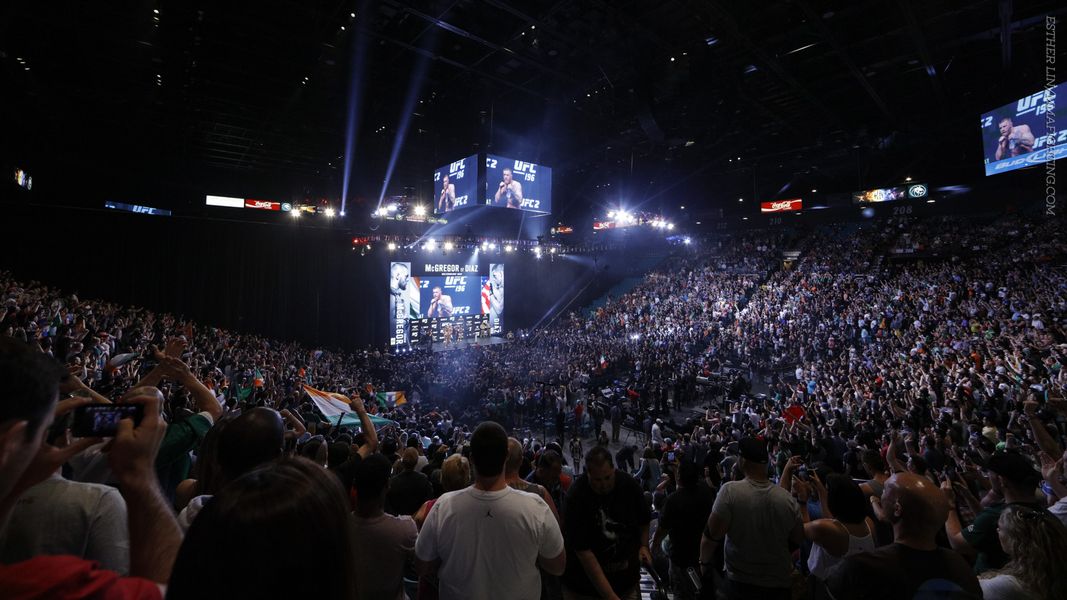 I was so excited to finally be doing this. Living in Alaska, I sometimes questioned whether or not I would ever actually attend. But after seeing Conor McGregor knock out Jose Aldo, I decided that no matter what, I would be at the next McGregor fight. This one happened to be UFC 196: Diaz vs McGregor. I still laugh at the fact that Conor McGregor was the reason that I attended this event because after Nate Diaz stepped in to fight him on short notice, I was no longer cheering for him.

We (my girlfriend and I) ultimately decided on purchasing the UFC VIP experience. This would be our first and possibly last live UFC event so we wanted to make it memorable.

We arrived to check into the MGM while the prefight press conference was in session. This was the press conference where Conor smacked Nate’s fist out of his face; causing a melee with the 209. I was upset that I couldn’t be in attendance for it, but I was sure to watch the replay when I got to my hotel room.

After that, me and my girlfriend had a few drinks and hit the pool. Being from Alaska, a pool is usually the first thing that we go to whenever we fly anywhere warm. After about an hour of sunlight, we decided to go pick up our UFC VIP passes in the MGM hotel lobby.

While walking through the hotel, I saw a large group of about 15 people walking in our direction. Almost every one of them was wearing a black shirt, so it was easy to distinguish their group from the rest of the Vegas foot traffic. Usually when you see a crowd of people, they are accompanied with noise. What was strange about this crowd was that they were all silent. The group of black shirts seemed to act as a black hole, sucking the noise out of anywhere in its path. As the group moved closer, I noticed right in the middle of it was none other than Nate Diaz. Surprised, I too had frozen in silence. My girlfriend looked at me and exclaimed "Nate Diaz! Let’s follow him!" Without hesitation, I did a complete 180, and began following. There were several other fans doing exactly what we were doing—following at a distance—unsure of how to tactfully approach a Diaz brother.

The group of black shirts made way to the food court and began sitting down scattered across various tables and booths. The opening that lead to the public seating was being physically barricaded by a large man. I recognized him as one of the bodyguards from the impromptu press conference held in California just days prior. As a crowd of fans began to circle the seating area, I spoke to another fan. We spoke softly as if we were at a zoo exhibit and didn’t want to disturb the animals.

"You should be able to." A fan with a New Jersey accent responded. "I’ve never seen them in person though."

As we looked at the group, I noticed some more familiar faces: Jake Shields, Richard Perez, Yancy Mederios, Joe Schilling, and even Nick Diaz. I lost sight of Nate briefly only to realize that he was sitting right in front of me with his back turned towards me at one of the booths. I looked down and saw that he was watching his press conference scuffle with Conor McGregor on a cell phone.

"Man, Nate that was crazy." I blurted out.

He looked back at me without changing his facial expression.

I continued, "I love the way you’ve handled Conor at the press conferences. People keep talking about what Conor says but I keep telling them that you’re the one to pay attention to."

At this point, Nate was turned around making full eye contact with me. He didn’t nod or respond, and remained expressionless. He simply watched and listened. I broke a brief silence by asking him something that he’s probably heard thousands of times, "Nate, could I please get a picture with you?"

"Yeah, sure." He casually said as he simultaneously stood up.

I eased my way past the bodyguard, placed my hand on Nate’s back, and awkwardly lifted my fist for a photograph. My girlfriend snapped some pictures. We both thanked Nate and told him we would be cheering for him. After that, we introduced ourselves to Nick Diaz, Jake Shields, Richard Perez, and Joe Schilling. Although there was very little smiling, (except for Jake Shields) everyone in the group was very polite. They allowed all of the fans to take pictures and hang out for a good 15 minutes before taking off. I must say that Jake Shields was my favorite person to talk to in the group. He was easy to carry on a conversation with. We covered a variety of topics including Rousimar Palhares, WSOF, and of course, the scuffle that had just happened at the press conference between Nate and Conor. He certainly made a lifetime fan out of me.

Throughout our 4-day stay at the MGM, we had the pleasure of meeting several recognizable figures. This included the likes of Ben Rothwell, Sage Northcutt, Joanna Jedrzejczyk, Chael Sonnen, Edmund Tarverdyan, Juliana Pena, and Mark Coleman. We couldn’t believe how accessible all of the fighters were. They were all so friendly, and happy to talk to their fans. Sonnen even introduced himself by politely saying "Hi, I’m Chael." with an outstretched hand. You’ll often see high profile fighters walking around accompanied by an entourage of sorts. What was cool about Chael was that he was with his mother. After introducing himself, he proudly introduced us to his mom as well. Say what you will about Chael Sonnen, but he’s a family man and he couldn’t be a nicer person to his fans.

During fight week, the buzz in the air was something special. The Irish takeover is a real thing. There were Irishmen all over Las Vegas. The tricolors were carried with pride, and the party didn’t stop. They even had a security guard inside of the display octagon in the MGM lobby to prevent any Irish intruders. All of the Irishmen that we met were very friendly people who were looking to have a good time. I was surprised to find that some of them were Nate Diaz fans like myself; although the majority of them were diehard McGregor fans. McGregor drew people from all over the world to this event. I met people from Australia, the UK, and all over the US who stated that they had come for Conor. I even met an Australian gentleman who told me that he flies to every McGregor fight with his son. How he manages to afford that is beyond me, but good for him.

We also went to one of Joe Rogan’s comedy shows. This particular show included material from Joey Diaz and Tony Hinchcliff. From what I understand, Rogan likes to do comedy shows on the Friday before a UFC event that he’s working. We jumped on that opportunity immediately. It was worth what we paid and then some. I think to enjoy the full UFC weekend experience, you need to catch a Joe Rogan comedy show. Combining his standup, his UFC commentary, and his podcast, it’s amazing how much talking that man does for a living. I hope he has some sort of insurance on his vocal cords.

The event was unbelievable. There were Irishmen in green suits, men and women wearing formal wear, fans wearing various MMA T-shirts, and shoulder-to-shoulder crowds near the concession stands.

While we both liked Conor McGregor and Holly Holm, my girlfriend and I wanted nothing more than to see Miesha Tate finally get the belt and for Nate Diaz to become a superstar. By now, you already know that we got both of our wishes that night. Despite the crowd being pro-Holly and pro-Conor, the place erupted after both finishes. Everybody knew that they had just witnessed something historic.

Maybe it was the luck of the draw, but this experience was amazing. I have zero regrets about attending a UFC event. I know that this event was uniquely exciting, but the days leading up to it were what made it memorable for us. I cannot begin to tell you how accessible these athletes are. They walk around the MGM and all over Vegas like you or me. They’ll stop and make time to talk to you if you introduce yourself. The athletes all seemed happy to meet with their fans on their own time. It was unlike anything I’ve ever experienced.