When brothers Caros Fodor and Phoenix Jones fight, Mama will turn away

If you ask Caros Fodor, fighting his younger brother Ben Fodor in a sanctioned bout with definitive rules is a cakewalk compared to the many unofficiated brawls and dust-ups of their youths -- early territory fights that went on well before anyone knew what a "publicity stunt" even was.

"This time we got a referee to break us up," Caros says, almost a little too giddily. "So this is probably the safest fight we’ve ever had."

The brothers Fodor will fight at World Series of Fighting 32, which takes place at the XFINITY Arena in their native Washington on June 30. It will be a catchweight bout at 162 pounds, meaning a rare compromise was reached between the two. The crowd will know well the combatants, who’ve long made names in the Northwest corridor. Both train with Matt Hume at AMC Pankration, the state’s most famous gym. Both have won regional titles. Yet not everybody is in love with the idea. Their mother, Susan, who adopted Caros and Ben when they were both infants, will not watch such nonsense. She will not even attempt it through her fingers. In fact, she is damn mad that her sons behave the way they do.

"I was hoping it would never happen," she says. "But it doesn’t come as a surprise."

Susan, just like Caros and Ben, knew there could come a day when the siblings -- brothers in everything but blood -- would take off their shoes and attempt to do competitive harm to one another. The writing’s been on the wall for the dozen or so years her sons have been involved in martial arts. Special occasions weren’t special at the Fodor homestead unless somebody was getting at somebody else’s jugular. Susan used to tell them to take it outside. 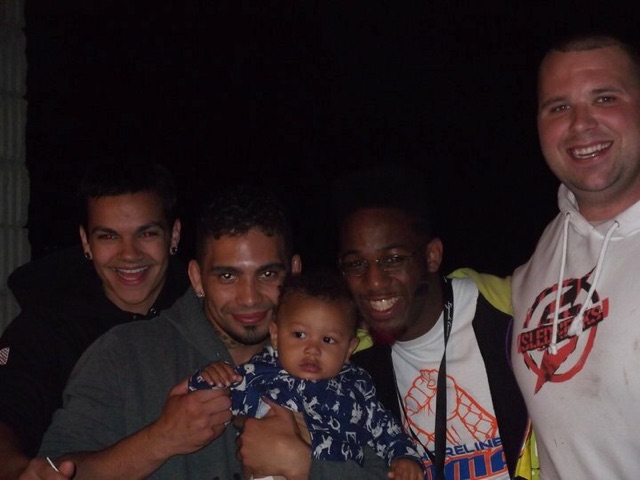 Photo courtesy of the Fodor family

"Caros did some of the worst things," Ben says. "We got into a fight in the kitchen at one point and I pushed him through a two-story window onto the grass. We had some really vicious fights. Christmas or Thanksgiving one year we got into a fight in the living room and I ended up triangling him to sleep. I got choked out on one of my birthdays. I got choked out really bad on that one, I’ll give him that one."

If it feels like a fine line is being crossed for Ben and Caros to duke it out for public entertainment and prize money despite their mom’s wishes, consider the time that Caros — a Marine just back from a tour in Iraq — nuzzled a gun into Ben’s belly while saying the things of a madman come undone.

"I remember this like it was yesterday," Ben says. "Caros was acting all weird and being kind of strange and PTSD [post traumatic stress disorder], so me and my friend went into his room and we were like, hey, you’re being kind of weird, do you think you’re okay? War does crazy stuff.

"He starts monologuing about strange stuff, things about Johnny being put in pieces, and all kind of weird crap. We’re kind of freaking out like, what are you talking about? He grabs a gun from under his bed puts it point blank to my stomach and pulls the trigger. Bang. And I feel the concussion and I’m sure I’m shot. So I reach down and grab my guts and try to hold my guts into my stomach, and I’m freaking out, crying and I run in my room and I’m plastered behind the door holding my stomach in, when I hear this knock. And he’s like, ‘leave me the fuck alone. I told you to leave me alone.’ He fired it so close to me, it burned my shirt, and left a muzzle like burn on my shirt. It was the best and scariest prank of my life."

Caros was carrying a Carbine 15, a shorter version of the M16, which he’d loaded with a blank round.

"It almost blew out the windows in my room it was so loud," Caros says. "My mom came running around the corner downstairs yelling what the hell was that?"

"He grabs a gun from under his bed puts it point blank to my stomach and pulls the trigger. Bang!" -Ben Fodor

Caros can’t help but chuckle at the memory.

"My poor Mom," he says. "We really put her through it. We had so many fights growing up. We used to hate each other. Right now is the perfect time for us to fight because we’re not getting along. We just fought a lot. He was a big kid, so he was pretty much my size after a certain age. There were some good tussles. A lot of violence.

"But man, growing up as a kid, we’re just so opposite. I’m super quiet, I don’t like to have the attention in the room. And he’s like the opposite, he has to be the highlight and he attracts attention from everybody no matter where we go. It’s always annoyed the shit out of me."

One example, of course, is that Caros doesn’t dress-up like a comic book superhero and go out at night to fight area crime, like his younger brother Ben — a.k.a. Phoenix Jones. King County’s most famous nonfictional vigilante, Phoenix Jones, has a resume that far outdoes whatever Ben Fodor has accomplished in the mixed techniques. As the central figure in the collective known as the Rain City Superhero Movement, Jones shows up to trouble spots in full superhero regalia: He sports a mask, an eight-pack of armor abs complete with stab plates, a phaZZer gun which fires rubber bullets, pepper spray, and a bulletproof vest. Jones is to the Emerald City what Batman is to Gotham.

Only, he’s not secretly sitting on untold millions like his fictional colleague.

Just three days after the fight between Ben and Caros was announced by WSOF, Phoenix Jones — dressed this time as Ben Fodor — headkicked a thug in the South Precinct who attempted to stab a bouncer outside a club, knocking him out cold. For Ben, becoming Phoenix Jones, a civilian doling out a special brand of justice, is part of the training camp.

Yet for Caros all the alter ego stuff is a little bit lunatic, and makes it that much easier to want to punch him in the face.

"I think it’s the most ridiculous thing ever in the world," Caros says. "I’ve always thought that. I’ve never been into the comics, I don’t understand any of that crap. But to actually have somebody do it is so ridiculously stupid. 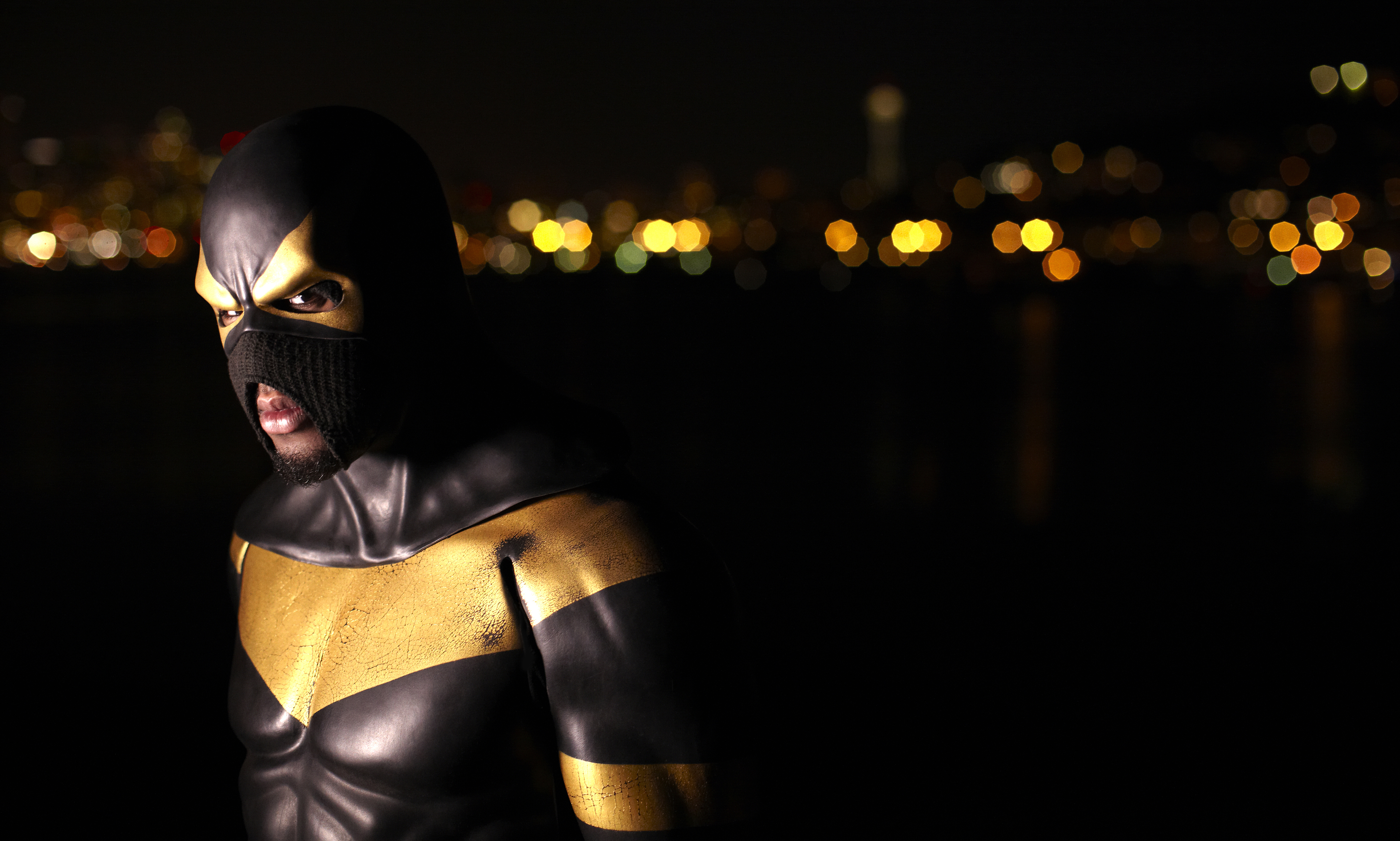 "But I have to give him the respect. He did do quite a bit with it. He got himself pretty famous, by himself with no publicist like he did an amazing job of that. Still, I think overall, dressing up a superhero is absolutely the stupidest thing you could ever do. I’ve had zero to do with it whatsoever. I can barely be around him when I see him in the suit."

Still, Susan Fodor doesn’t quite see her sons — superheroes, war veterans, babies in her arms — playing out their own personal version of Captain America: Civil War.

"I guess my perspective is so different because I am the mother," she says. "My feelings are for both the boys, and they just don’t see the fight that way. They see it as a fight that they’re going to have. And it’s hard for me to look at it in that light. I don’t know. I know they’re both sensitive to my feelings as well because they both know I’m pretty concerned about it."

The fight within the fight was just that: Breaking the news to Momma Fodor, who was left out of the negotiations. Like children trying to pull a fast one, Caros and Ben acted first and left the consequences to be dealt with later.

"It’s been a rough couple of days," Caros says. "Me and Ben got the contract last week and I didn’t bring it up to her. She was always saying unless we were going to make a lot of money, we shouldn’t do it. And then when it came down, that was the first she’d heard of it. Neither one of us told her that we were in the final stages. She’s pretty devastated about it and upset and saying how we shouldn’t do it.

"But it’s already a contract, already signed and they’ve got the event. So it’s happening. She doesn’t want to take sides. But me and Ben are just trying to make money."

Caros is usually in Ben’s corner, along with Matt Hume and Caros’ friends. This time Ben doesn’t know who will be in his corner. He’s not sure the crowd in Everett, the venue so close to his house that he says he can jog to it, will be on his side or his brother's.

Words like "battlefield" aren’t exactly music to Susan Fodor’s ears. Ben said he had a straight talk with her about fighting Caros, whom she has traveled as far as Singapore to see fight in ONE Championship.

"This is my interpretation, so take it how you will," he says. "She’s like, ‘Caros doesn’t really want to hurt you. It’s towards the end of his career, Caros wants to get paid, this fight has been bothering him for awhile and he’s just kind of wrapping up loose ends.’ But, she says, ‘I’ve known you for a long time now and you’re not the same kind of guy. You put everything into it. You want to be a superhero, you get a $10,000 bulletproof suit. You want to be a bowler, you become the best bowler in the nation for three years. I’m worried you’re going to try to hurt him.’

"And I’m like, I told her straight up, I said, ‘if I can kill him, I will, because there’s no rematch if he doesn’t leave the cage.’ She got really upset. I don’t want to lie to my mom and I looked at her and I said, you would expect nothing different and she said, ‘I know, that’s why I’m worried.’"

"Nah, man, this fight does nothing for my career," he says. "However in my mind, it’s a great fight because I lost and I didn’t get my win bonus for my last fight. I want my win bonus to get my financials right. We’ve been talking about this forever and it’s actually pretty cool to be like the first two brothers to do something like this. After this, I’ll go back to 55 and get started back with my career, but this is just kind of like making money."

Momma Fodor listens to what he’s saying. She has watched both her sons train and fight everywhere from Mashantucket to Kallang to Kent. She’s listening to the talk between them for as long as she can remember.

But she isn’t trying to hear it.

"I support them and all the hard work and everything they put into it," she says. "It’s something that’s close to their heart and they put a lot of time and energy into it, and in that way I support it. It’s a difficult thing for me to watch in the first place, though. And this is going a little far. My main concern is that no one really gets injured, and what they do with the result of it is something they need to think about."